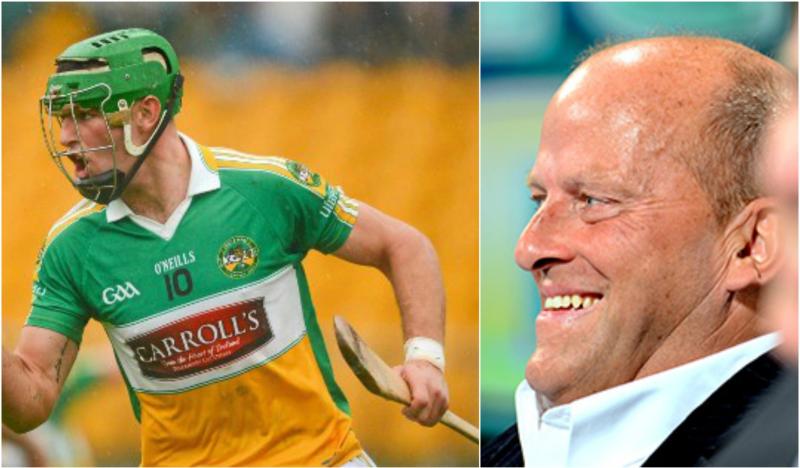 Offaly showed something like their old spark to strike late and beat Westmeath in the Leinster Hurling quarter-final. Tommy Doyle apparently had Shane Dooley "in his pocket" - roasted him according to commentators - and yet the Tullamore man amassed a personal tally of 3-08. Some roasting alright!

In the aftermath of the clash, and that of Galway and Dublin, talk turned to our semi-final with the Tribesmen. It's fair to say the prospect of Offaly upsetting the odds in that one was absolutely scoffed at by the likes of Eddie Brennan and Ger Loughnane on last night's Sunday Game. Brennan reckons we are in for a heavy beating while Loughnane paid the Westmeath game the ultimate insult, describing it as a 'lovely game' as if he was talking about an underage blitz.

Patronising stuff like that is no surprise coming from Loughnane, the same man who three years ago said Offaly was the only county where you still see "fat legs, bellies and arses" at inter-county hurling level. The man clearly holds onto memories of 1998 as much as the hardened Offaly fan - but for very different reasons.

Galway dished out a 6-23 to 1-12 beating to Offaly in the league in February. They went on to win the league against Tipperary, who also gave us a hiding, and are now well fancied for the All-Ireland. That's presumably why Galway are 1/100 in the betting for the semi-final with Offaly, and why Eddie Brennan, Des Cahill and Ger Loughnane chuckled when the question of an upset came up on the highlights show.

SEE ALSO: ANALYSIS: How Offaly can get at Galway in Leinster semi-final

"Let them enjoy this weekend," Cahill said signing off the report on the Offaly/Westmeath game. You'd get deeper insight from a drunk on a bar stool than the Sunday Game gave the 'lovely' contest. You get the impression that Offaly hurling is becoming the joke of the so-called top brass, something that once surged and has now relapsed into nothingness again.

Offaly were the upstarts of hurling in the 80s and 90s. The likes of Ger Loughnane didn't like us and to be fair, we didn't like him or anyone else for that matter. Speaking at a panel discussion in Edenderry at the weekend, one of the stalwarts of the 1990s team, Michael Duignan, said he doesn't recall ever talking to opposition players during his playing days. He said players now are too cosy with competitors, and I'd reckon that's why Offaly is seen as one of those soft counties. Perhaps that explains the laughs and 'lovely' game comments.

Duignan and his like had the right idea. You might shake hands after a game, but on the pitch, you hate the guys you're playing against. You want them to hate you. Teams hated playing us back then. We leathered teams - even when we didn't win. We cannot become the fading challenge that's laughed off as a glorified training match for Galway. That's not what Offaly is about. We lack the quality we once had but we can still maintain that edge.

SEE ALSO: SIDELINE MOUTHPIECE: Offaly may as well not turn up for Galway game

Numerous commentators spoke of character in the wake of our win over Westmeath. We were backed into a corner and showed enough steel to get over the line. We have to remember, without any disrespect, that was Westmeath, and Galway will pose a far more potent threat when they roll into town.

A Galway man abroad took to Twitter today to say he is thinking about flying home for the Leinster final. He said he will wait until after the Offaly game to book the tickets for fear of 'tempting fate.' At least he tempered his Leinster final plans with that comment but it shows that we're being seen as a soft touch. That's the saddest thing about Offaly hurling these days.

Never mind the lack of progress over the last 15 or 20 years; the fact that we've lost that cutting edge hurts most of all. The Offaly team now preparing for Galway need to read all these comments, and see the Sunday Game lads laugh at the prospect of them upsetting the odds. That should be enough to get them fired up to at least give it a rattle.

In terms of quality, we are well behind Galway, but as all our mothers would have said to us growing up - stranger things have happened. It's still 15 against 15 on the day and what's required is something raw - a visceral energy that will put the frighteners on them. We shouldn't be resigning ourselves to a defeat because Galway are 'better' or 'stronger' than us. I can see the aftermatch already. Pundits and managers alike saying we will have learned a lot and will come on from it after Galway have hopped back on the bus with a 15 or 20 point win under their belt.

If that's where we're at, then we need to re-evaluate our attitude. Not one person is expecting us to beat Galway, but if we can rekindle something like the steel we had in the 1990s, we can at least make sure their sweating during the course of the 70 minutes and they need the air conditioning and maybe a few bags of ice on the bus on the way back west. Leave them with burning muscles and a lasting memory that Offaly hurling is no pushover.

The start of any revolution in a team's fortunes comes from mentality. Donegal in football terms a few years ago went from a team of perennial losers into All-Ireland champions, a team that carried a fear factor, a sort of aura around the country as they bulldozed their way to Sam Maguire. Virtually the same team had been a tame beast in the few years previous and that changed through Jim McGuinness convincing them they were winners. Everything else came after that.

Recapturing some of the spirit that Duignan summed up in Edenderry is the start of that process. We need to avoid becoming a dismissed proposition. We need to stop the laughter going on at our expense before we regress any further. We need to be hated.