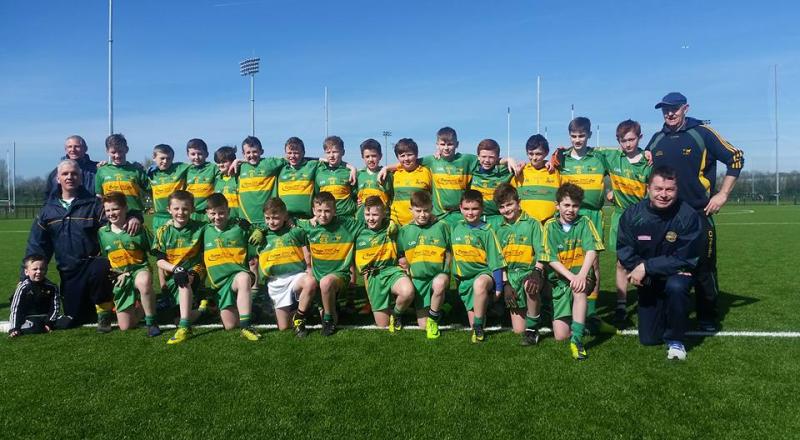 Rhode's U13 footballers who became Leinster League champions at the weekend

We are delighted to announce Rhode GAA LIP SYNC on Sunday 30th of April in the Tullamore Court Hotel. Doors open 7pm. Acts are currently been finalised big performances on night are guaranteed along with top class MC Eugene from Rory Stories and some well known judges. This is a night not to be missed.

Tickets are now on sale  and can be purchased from  Shaz Hair Salon Wednesday- Saturday  046 9737555 or you can contact Sharon on 087 1343677 tickets will also be on sale at our lotto draws which will be in Killeen's 3rd of April from 8:30pm to 9:30pm. Please Note that anyone under the age of 18 will have to be accompanied by an adult or Parent. Anyone seeking to advertise your business or a message of support in our LIP SYNC  Booklet (Full page advert €100 / Half page €50) can do so by emailing rhodelipsync@gmail.com or contacting Declan Gorman 0863834232.

On Saturday night last Rhode GAA Launched their New Adult Teams Jersey  and Sponsor Eden Decor in Killeen's Lounge with a big crowd in attendance. A big thanks to John and Orla Kilmurray of Eden Decor for their sponsorship and members of Senior, Intermediate and Junior teams and management for attending on the night. It was also a special night for the club as we marked the services of our friend and colleague John Beezy Glennon. Club Chairman Joe Malone spoke highly of John and of his hard work and commitment he has given to Rhode over the years and looks forward to him continuing that work. On the club's behalf, club Patron Joe Kellaghan made the special presentation to John. Following that John spoke as he thanked the club for this special honour and thanked his family and friends for the support shown to him over his recent illness and recovery. Many Thanks to Colm and Cathriona Killeen for lovely night of music and finger food.

On Saturday morning last, Rhode U13 team travelled to Abbotstown to take on Caulry of Kildare in the Leinster League Final. Rhode were not just going for a day out and certainly proved that and at half-time led 7-4 to no score. Rhode kicked on in the second half winning the Leinster league 11-09 to 1-02. It is a wonderful testament to the hard work being put in by the players and management. Big thanks to Stephen Darby, Seamus Cocoman, Michael Kennedy and Pauric Murphy. There was a massive support from Rhode which was massively appreciated.

Congratulations to Offaly Senior Footballers on collecting their first brace of points in division 3 beating Sligo 2-14 to 2-10 Offaly now face Laois on Sunday, April 2 at 2pm in O'Connor Park Tullamore. It is a must win game to avoid relegation. Rhode were represented with 6 of our players currently on the Offaly Panel:  Ken Garry, Eoin Rigney, Brian Darby, Conor McNamee, Ruairi McNamee and Niall Darby.

Offaly GAA coaching and games are hosting their first ever 2-day Easter camp for primary school boys and girls from 4th, 5th and 6th class in Rhode GAA field, Fr. Dowling Park on Thursday 20th and Friday 21st of April, 10am to 2pm.

It's a chance for the kids to further their footballing skills with the top Offaly coaches over their holiday term. Full cost for the two days is €20-00 and the children are required to bring a packed lunch, drink, towel and change of gear. Please be aware booking strictly online only and can be done so by visiting www.eventbrite.ie  and search for Offaly GAA Easter Camp Rhode

There was no winner of the Rhode GAA Lotto Draw that took place on the 20th of March for a Jackpot of €15,000.  The numbers drawn were 13 25 26 27.  The club would like to thank all those who supported the draw and thanks to O'Toole's for the use of their premises and for their help and cooperation. The following matched three numbers and received €50 each

The Rhode GAA Lotto is the main source of income the club has and now you can play online through our website.  The good news is when you play the lotto online you are entitled to free draws, for example, pay for seven draws receive the eighth one free, pay for fourteen draws receive two free and so on.  In other words, the more you play the more free draws you are entitled to!!

Massive congratulations to Rhode's top jockey Pat Smullen on been selected as Offaly Person of the Year for 2016 by the Offaly association Dublin. The presentation will take place at the Offaly Association's Gala function on Saturday, April 1 in the Bridge House Hotel, Tullamore. A special night is in store as many will come together to celebrate Pat's achievements, and anyone wishing to purchase tickets can contact John Glennon 0872715804 or Paddy Whitey Quinn 0868170625

Get well wishes are extended to all of the people of the parish who are ill or hospitalised at the moment especially Nuala Quinn and Kathleen Swaine.