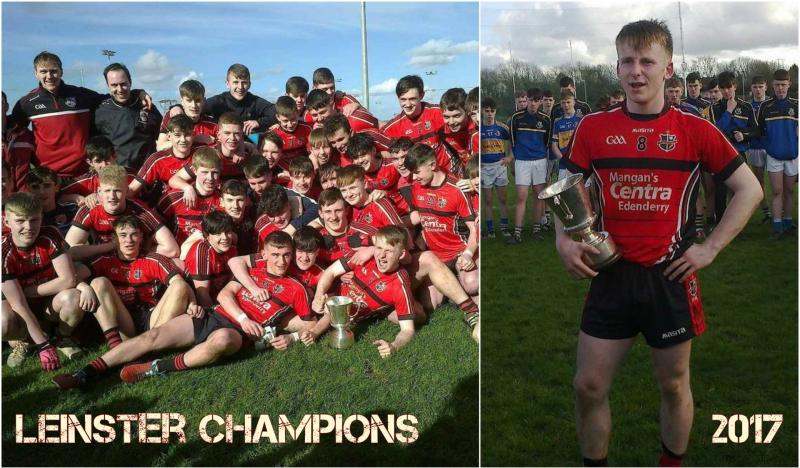 The Junior footballers from St. Mary's Secondary School, Edenderry, have prevailed in the final of the Top Oil Leinster PP Junior Football A Final at Hawkfield, Newbridge, this afternoon, Wednesday, March 8.

Led by captain Sean Bannon, the young footballers from the Offaly school got out of the blocks quickest in a sunny Hawkfield to slam their rivals by 12 points.

Assisted by a strong breeze in the first half, St. Mary's started brightest, racing into a 0-05 to 0-00 lead inside ten minutes, including some beautiful taken frees from the boot of Jack Smyth. Having made the shorter trip to the Newbridge venue, Naas CBS were shellshocked by the Edenderry onslaught. They reacted with a point but it was almost immediately cancelled out, putting St. Mary's 0-06 to 0-01 ahead after 14 minutes.

Just as Naas tried to steady the ship and contain St. Mary's until the break, Edenderry put them to the sword with another point and a goal scored by Mark Cully, extending the lead to nine points after just 18 minutes. Naas retaliated with a point but the Edenderry school tagged on two more before the break, leaving the scores standing at 1-09 to 0-02 at half-time.

Naas CBS faced a huge task even with the wind advantage in the second half, but they did stick to the task well upon the restart. They hit the first two scores of the half inside 40 minutes, but soon after SME put the death nail into their opponents with another green flag thanks to their captain, Sean Bannon.

It was 2-09 to 0-04 with just 15 minutes remaining and the realisation of the mammoth task ahead was taking its toll on Naas. However, they rallied once more as they scored a goal of their own within four minutes of the Edenderry second thanks to Al Bergin.

However, the Naas school would only score once more before the end as St. Mary's settled down to cruise home, adding another five points before the full-time whistle made them champions.

SEE ALSO: QUIZ: How many of these Offaly GAA jerseys can you match to their clubs?

Today, sharpshooting duo Mark Cully and Jack Smyth were in inspirational form as they chipped in with a haul of 1-11 between them. The Edenderry school now enter the 'A' grade of the All-Ireland schools football championship when the likes of the Ulster, Munster and Connacht teams come into the reckoning.

Their next opponents will be St. Pat's of Armagh in a game to be played in Newry this Sunday.