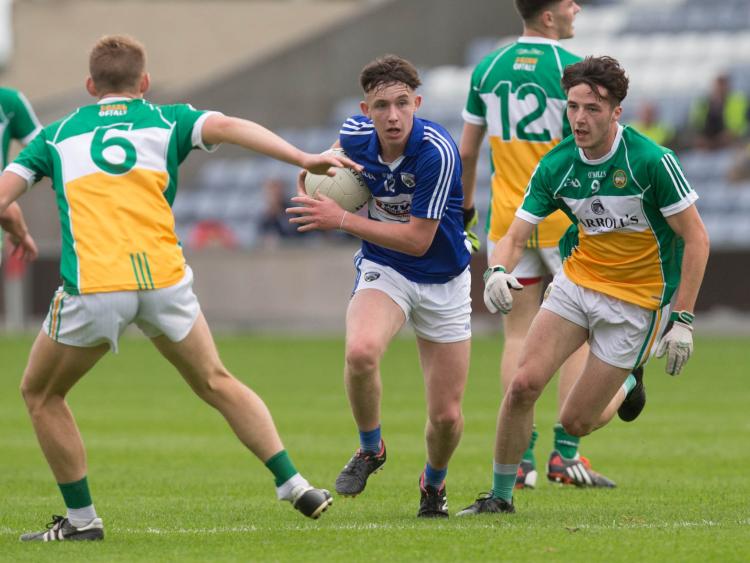 Offaly's hopes of reaching the Leinster Minor Football Final for the first time since 2010 ended at the hands of an impressive Laois side in O'Moore Park on Tuesday evening.
There was little to chose between the sides in a tight and low scoring first-half with Laois holding a one point lead at the break at 0-4 to 0-3.
However the second-half was all one way traffic with Laois outscoring Offaly by 1-11 to 0-3 to book their place in the final in Croke Park.
The pace and movement of the Laois forwards caused problems for Offaly in the second-half with man of the match Adam Deering pulling the strings at centre-forward.
At the other end, the Offaly forwards struggled to make inroads against a tight marking Laois defence and two of Offaly's three second-half points came in the final four minutes when the game was well and truly lost.
Both sides were slow to settle into the game but Laois opened up an early 0-3 to 0-1 lead with two points coming from Diarmaid Whelan frees. Offaly eventually opened their account in the 12th minute when impressive midfielder Michael Mooney burst forward to score. The Ballinamere man was arguably Offaly's best performer of the evening.
Another Whelan free put Laois three ahead again but Offaly, who turned over possession too easily at times, managed to get back within one before the break with Cian Johnson (f) and Shane O'Brien finding the target.
The second-half was one way traffic however with Laois hitting four quick points to open up a seven point lead. Clonbullogue's Cian O'Neill pulled on back for Offaly but it was only a brief respite as Adam Deering and Diarmaid Whelan scored the next five points to put nine points between the sides.
Any lingering hope of an Offaly fightback disappeared when substitute Evan Lowry found the back of the net after being put through by Deering.
Nathan Poland and Cian Johnson scored late points for Offaly but they were just consolation scores as Laois advanced to the Leinster Final in Croke Park