Mountmellick out to upset Willow Park 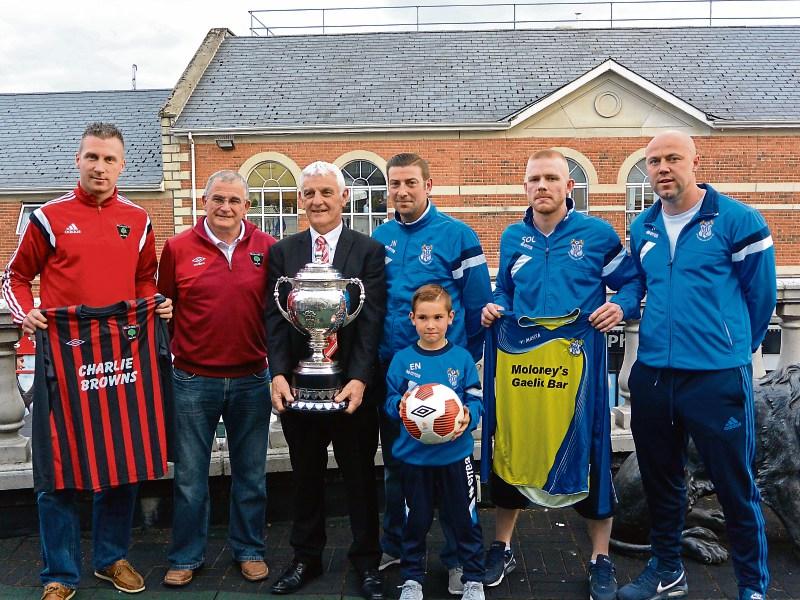 Kick off is fixed for 5.00pm and it brings together two of the leading lights in Midlands football with recent kingpins Willow Park taking on one of the more traditional names, Mountmellick United, in what should prove to be a fascinating encounter.

Both teams have won this cup three times, however Mountmellick’s last victory was in 2003 while Willow’s first success came in 2009. Indeed since then Willow have been knocking on the door every year, while Mountmellick were last in the final in 2010 when they lost heavily to St Peter’s.

Willow, who won an unprecedented treble last season, are still in with a chance of repeating the achievement this year. They already have the Paddy Cotter Cup in the bag and are pushing St Peter’s all the way in the Senior Division, in addition to qualifying for the blue ribbon final. They will start as hot favourites to retain it, especially if the likes of Robbie Shine, Benny McGuinness, Gary McHugh and Jamie Fahy hit top form.

Indeed Willow have been playing out of their skins in recent weeks with five wins on the trot in the league, plus beating St Peter’s in the Paddy Cotter Final and in the quarter finals of this competition as Kevin Murray came into his own with some top class performances.

Perhaps the worst performance over that period was in the semi-final where they struggled to get the better of giant killers Castlepollard Celtic. Jimmy Greene as always will have his players well prepared for this game and on paper they should be strong enough all over the pitch and go on to add another trophy to their collection.

Mountmellick for their part would love to upset the odds and bring the cup back to Laois for the first time in many years. They will recall memories of the first time they won this famous old Cup when in 1989 they defeated Clones Town in St Mels Park Athlone in a memorable final.

That team was led by players like Jim McCormack, Paul Dempsey, Ger Kearney and George Dunne. They will be hoping the mantle will be picked up this time by Colm Coss, Captain Shane O’Connell and John Watchorne.

Robbie Hibbits will provide a wealth of experience while the youthful endeavour will come from Ross Byrne, Cathal Cleary and Davis Pedro.

Manager John Nelson knows that if all of these players can play to their full potential and the team as a whole get off to a good start then the upset could be on the cards.