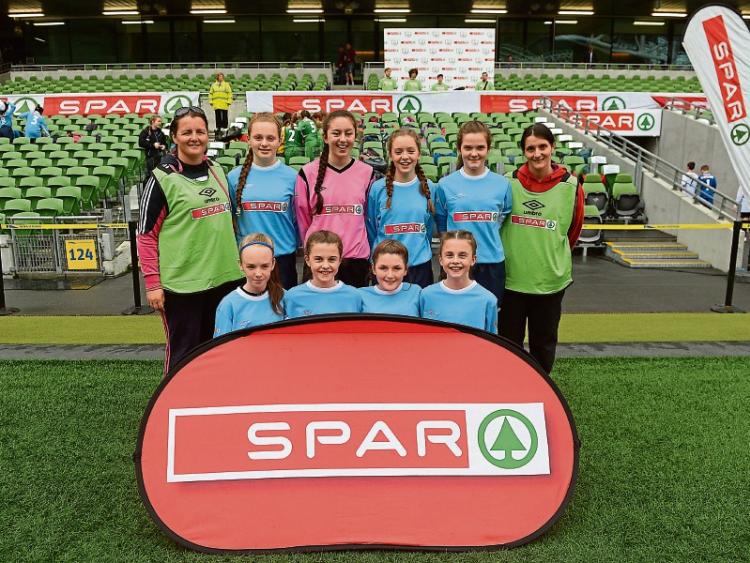 A total of 192 children, representing 24 schools and 11 counties had the opportunity to take to the field in Aviva Stadium, the home of Irish Football. 4th, 5th and 6th class students from Galway, Donegal, Tipperary, Meath, Westmeath, Cork, Limerick, Cavan, Carlow, Sligo and Offaly all experienced the excitement and carnival atmosphere of the national finals, cheered on by thousands of supporters who made the trip.

Nearly 24,000 children from 1,267 schools started out in blitzes held nationwide making it the most successful year to date and the biggest and best competition in the primary schools soccer calendar.

“SPAR is extremely proud to be associated with the SPAR FAI Primary School 5s. It is a fantastic programme that encourages children to be more active and participate in sport in a fun and competitive way. The Finals is a wonderful opportunity for children to play in an iconic venue such as the Aviva Stadium, on the same pitch as their footballing heroes and for their family and friends to come along to support them. It was a fantastic day, well done and congratulations to all teams on getting to the Final.”

Fergus McDaid, Hon. Secretary of FAI Schools stated, “We’re delighted to have showcased the wonderful talent of our 192 finalists in the Aviva Stadium for the National Finals. SPAR have been phenomenal in their sponsorship of the SPAR 5s programme for the second season. We had 23,736 children participate in the competition in 2016 which marks a 23% increase since SPAR’s investment in the programme at grassroots level.”