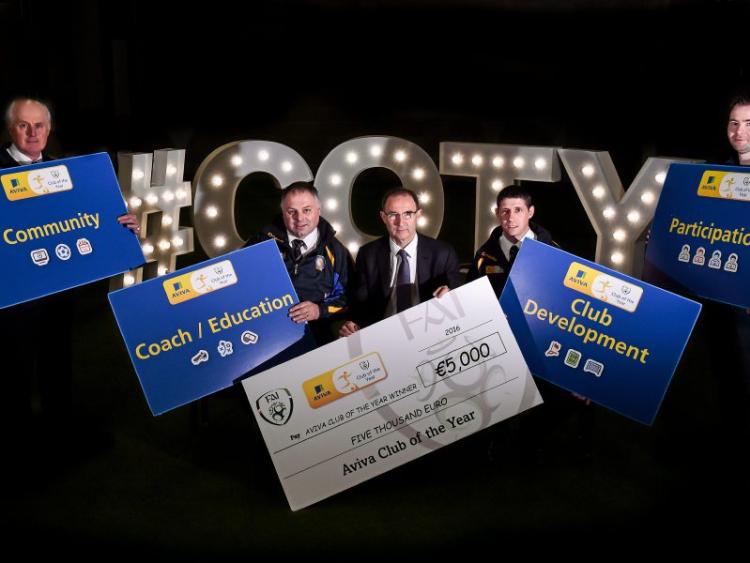 Junior football clubs across Offaly are being urged to submit themselves for this year’s Aviva Club of the Year Award.

Republic of Ireland manager Martin O’Neill launched the search for Ireland’s top club for 2016 at the Aviva Stadium in Dublin.

The competition is open to all football clubs across the country. Eight clubs will be shortlisted for the award, two from each category. Each will receive €1,500 and the overall winner of the Aviva Club of the Year will be given €5,000 for their club.

John Delaney, Chief Executive, Football Association of Ireland said; “I would encourage all clubs in Offaly to enter the Aviva Club of the Year. The award is the blue ribband event for the country’s best clubs and is one of my highlights on the football calendar,” said FAI CEO, John Delaney. The winning club is judged across four key cornerstones, which establish its involvement in the community, participation of boys and girls within the club, coach education and club development. The standard amongst entrants is getting stronger and higher each year, and is a testament to the fantastic work that is being done out there by all of our great clubs.”

The Aviva Club of the Year is now in its 11th year and is open to any club across the country to enter free of charge online. Overall, in excess of €160,000 has been awarded to clubs country wide in recognition of their achievements on and off the pitch. Clubs can enter in one or more of the four categories; Community, Coach Education, Club Development and Participation.

The top two in each category will go forward to the final round at the FAI AGM in July, when they will present to the Club of the Year judging panel. The judging panel is headed by Donal Conway, Chair of the FAI Underage Committees and includes representatives from FAI Club Development, Dublin City Council and Aviva.

The overall winning club will receive an additional top prize of €5,000 as well as the prestigious Aviva Club of the Year Trophy.

Martin O’Neill, Republic of Ireland Manager, said; “The Club of the Year award is extremely important to clubs all over the country and to the communities around these clubs. I’ve been at the last few Aviva Club of the Year awards and you can see what it means to them all. If you take the current Ireland squad, a third of those have come from Irish clubs and we need to nurture that. Look at the night Shane (Long) scored against Germany, I’m sure we’d all have loved to have been part of Shane’s club Two-Mile Borris in Tipperary that night. So I want all clubs in Ireland, big or small, to get involved in this year’s award.”

Mark Russell, Sponsorship Manager, Aviva, said; “Across the winners of the Aviva Club of the Year you can see it’s not the big or well known clubs winning in many cases. It’s the ones that are doing great work within their clubs. They don’t necessarily have to be doing brilliantly on the pitch: it’s the work off the pitch that will help build the club for the future and this is what we hope to find again this year. So if you think your club is doing good work in any of the categories then we’d encourage you to enter as you may be exactly what we are looking for.”

Last year’s winners Achill Rovers from Mayo were nominated in the participation category but it was there overall work in the Achill community that saw them secure the award. They integrated every part of the island, young and old, into the club and even attracted Cameroon World Cup star Joseph Ndo as a coach to Achill Rovers, such was the draw of the spirit around the club.