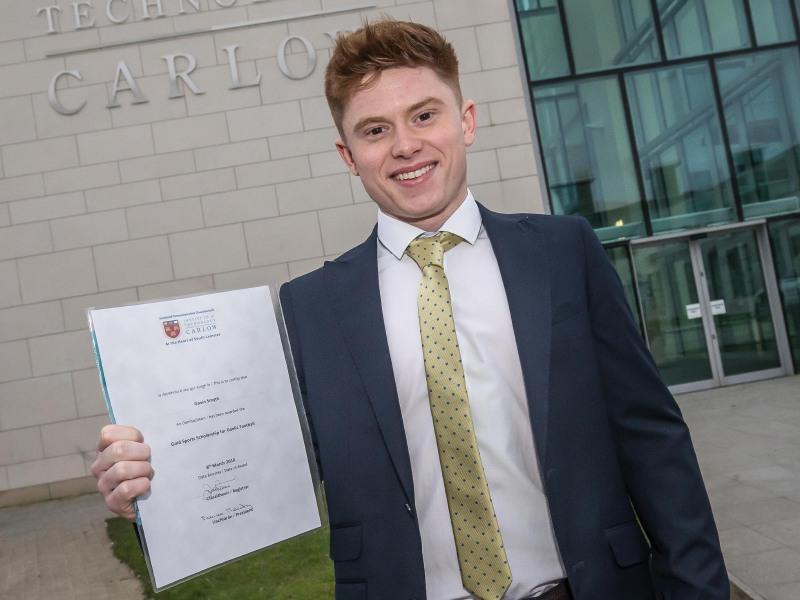 Two Offaly students were amongst those awarded sports scholarships by IT Carlow.

Gavin Smyth, who plays with Offaly minors and Gracefield was awarded a sports scholarship (gaelic football), alongside camogie player and All-Star nominee Siobhan Flannery of St. Rynaghs, who is from Banagher. he scholarships will provide financial and academic support, mentoring, injury rehabilitation, strength & conditioning support, high performance coaching and access to the IT Carlow’s renowned sports facilities.

The total number of sports scholarships offered to students - 81 this year - has more than doubled since the programme was introduced in 1999, reflecting IT Carlow’s renown as one of the leading third-level sporting institutions in the Ireland and a modern hub for sporting excellence with a growing academic portfolio of sports programmes.

At a ceremony at IT Carlow’s Barrow Centre, the Institute awarded a total of 44 academic scholarships and 81 gold and elite sports scholarships for the 2015/2016 academic year to students who have distinguished themselves, both academically and through their exceptional sporting ability.

Speaking at the ceremony, Dr. Patricia Mulcahy, President of IT Carlow, said, “Today’s ceremony recognises excellence. Our academic scholarships recognise the significant achievement of our first year students who excelled in the Leaving Certificate and who are now undertaking degree programme across our various faculties. I have no doubt that their academic abilities will contribute greatly to this Institute. Our sports scholars demonstrate the dedication of balancing academic ability with significant sporting achievements - achievements that contribute to IT Carlow’s significant sports renown, as well as to Irish sport itself”.

IT Carlow consistently features highly in the CAO first preferences for Institutes of Technology, according to the Institute, which sees an annual average of 12,000 students apply for up to 70 Higher Certificate and Degree courses via the CAO. Since its founding in 1970, IT Carlow has generated more than 45,000 graduates. It currently ranks as the fourth largest of Ireland’s 14 Institutes with 7,000 enrolments.