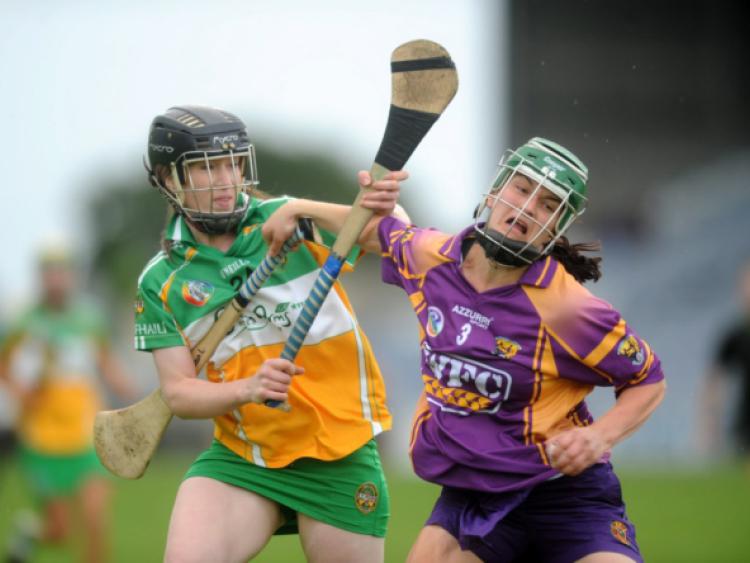 After a slow start where they trailed defending All Ireland Champions Wexford by 1-4 to 0-1 after 15 minutes, the Offaly Senior Camogie team put in a stellar performance for the remainder of the game and were hugely unlucky to lose out by a single point after a thrilling All Ireland quarter-final in O’Moore Park last Saturday.

After a slow start where they trailed defending All Ireland Champions Wexford by 1-4 to 0-1 after 15 minutes, the Offaly Senior Camogie team put in a stellar performance for the remainder of the game and were hugely unlucky to lose out by a single point after a thrilling All Ireland quarter-final in O’Moore Park last Saturday.

In front of a large Offaly support, Aidan Franks’ side were in front with ten minutes to go but some generous refereeing decisions kept Wexford in contention and in the end it was an Ursula Jacob free that proved the vital score in injury-time.

Offaly had done remarkably well to get back into the game with a contender for goal of the season in any sport from Michaela Morkan edging them in front midway through the second-half.

Unfortunately for Offaly, luck was not on their side as Wexford got the benefit of some big calls to keep them in the game.

In the build up to the telling late free, Offaly’s Michaela Morkan had been clearly fouled as she tried to clear the ball but Clare official John Dolan allowed the play to continue before eventually awarding the free to Wexford.

It was one of many questionable decisions that went against Offaly on the day. Earlier in the second-half when Offaly were getting on top, Wexford were awarded a scoreable free when Michaela Morkan was deemed to have charged while at the other end Elaine Dermody was bizarrely penalised for overcarrying the ball after she had flicked it over the head of a Wexford player and caught it on her hurl.

He also denied Offaly a clear goal scoring chance when Lorraine Keena was put through on goal only for the play to be called back for a foul on Elaine Dermody despite the fact that the referee had initially played advantage.

There were some strange decisions against Wexford as well including a point that wasn’t given that looked to be clearly over the bar but in the main the big decisions went against Offaly and the Offaly supporters let their feelings be known at the final whistle as a chorus of boos rang out in O’Moore Park as the referee left the field.

However those boos soon turned to cheers as a dejected Offaly side left the field to a standing ovation. Just one year earlier they had been resoundingly beaten by Wexford in the semi-final but this year they came within a point of the three time All Ireland Champions showing just how much progress is being made in the county.

Offaly were slow to get into the game and by the 15th minute they trailed by 1-4 to 0-1 with Wexford’s goal coming when a miss-hit shot from Stacey Kehoe dropped right into the top corner of Eleanor Clendennen’s net with the Offaly ‘keeper left with no chance.

Clendenned twice saved Offaly in the early stages with brave goalkeeping and at the other end her side finally got a foothold in the game.

Lead by the excellent Elaine Dermody who hit four points in the first-half and the pacey Tina Hannon who scored two, Offaly had managed to get back within two at half-time with Wexford leading 1-5 to 0-6.

Defensively Offaly also upped their game with Fiona Stephens marking Ursula Jacob out of the game while Triona McDonald, Marion Crean, Linda Sullivan, Michaela Morkan and Sheila Sullivan all were getting the better of their individual battles.

Offaly were on top at this stage and through Siobhan Flannery, Elaine Dermody and Tina hannon, hit three of the first four points of the second half to level the scores.

Wexford hit back with two points from frees from Ursula Jacob before Michaela Morkan’s superb goal put Offaly in front.

The Player of the Game picked up possession on her own 45 metre line and charged up the field leaving Wexford players in her wake. She handpassed the ball across to Elaine Dermody who quickly returned the ball to Morkan close to the Wexford goal. The Shinrone player made no mistake rattling the ball to the back of the net to put Offaly in front.

In the closing minute Offaly missed a number of chances to retake the lead and in the end Ursual Jacob’s late free proved to be the winning score.