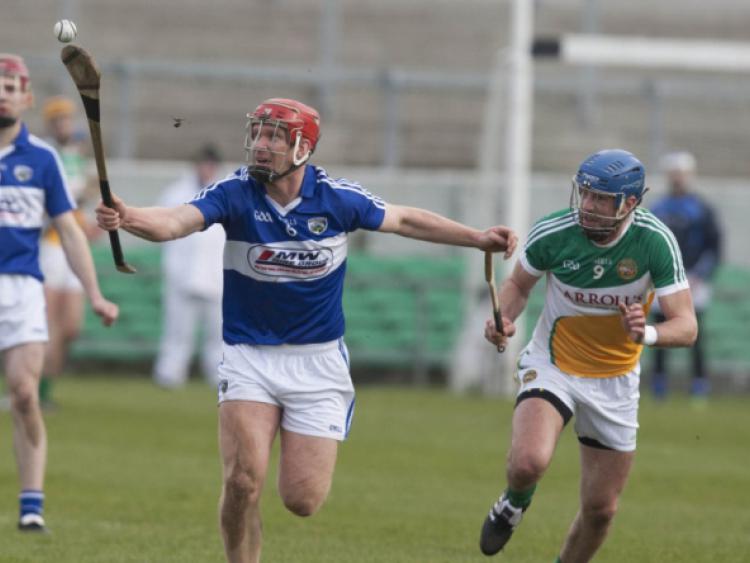 Allianz NHL Division 1B Round 1

Entering the final three minutes, Laois were full value for a seven point lead having dominated the game. With Stephen Maher in fine scoring form, Laois were five ahead by the break and they were never threatened until the closing minutes when against the run of play, Offaly struck for two scrappy late goals.

That left just one between the sides and Offaly could easily have stolen something from the game however a point from Tommy Fitzgerald gave Laois the relative comfort of a two point lead with a well taken score and secured two points in what will be a tight division.

In almost every aspect of the game over the 70 minutes, Laois were the better side. They were sharper, faster, played with more precision and at this early stage of the season, their certainly looked the fitter side.

Tactically they played with Dwayne Palmer as a sweeper and Offaly played right into their hands launching aimless high balls forward that the visitors mopped up with ease. Once Laois had possession, they rarely gave it away cheaply and there invariably seemed to be a blue jersey in space looking for the ball. The passing, short and long, more often than not was accurate and Laois built patiently from the back to great effect.

While not wanting to take away from an excellent Laois performance, and they will be more than happy to have opened their campaign with a win, it has to be said that Offaly were very poor and a pale shadow of what you might expect from a county with a strong hurling heritage.

Collectively their touch and basic skills were terrible and their passing was of an equally sub-standard. Their forwards were ineffectual with only two of the starting six managing to get on the score-sheet although they were not helped by an endless supply of directionless long balls.

Laois will face a far better team and a far sterner test when Cork visit O’Moore Park this Saturday nightand they will hoping to start as strongly as they did last Sunday as they rattled off the first three points from Ciaran Collier, Tommy Fitzgerald and Charlie Dwyer before Offaly had a chance to settle into the game.

Offaly responded with points from a Joe Bergin free and one from play from Brian Carroll and they almost got in for an early goal but Eoin Reilly did brilliantly to save from Carroll. Both sides were far from full strength but Laois were playing by far the better hurling with Dwayne Palmer putting in a fine individual display in an unfamiliar role as a sweeper. Points from John Purcell and Charlie Dwyer left Laois three up midway through the half as both sides struggled with the cross wind hitting nine wides between them in the opening 17 minutes.

Joe Bergin found his range with a point from a free from inside his own half as the clock ticked over to 20 minutes but Laois responded in emphatic fashion when Stephen Maher blasted home a 21 free past the flailing hurls of the Offaly defenders.

Maher added two points soon after, one a fine effort from wide on the right, but Offaly rallied with four points from free from Joe Bergin. Laois held their nerve late in the half and a Stephen Maher free and a score from an impossible angle from Neil Foyle left them five up at the break at 1-9 to 0-7.

Offaly drew first blood early in the second-half when Joe Begin slotted over another free but the next three points all came from Stephen Maher to leave seven between the sides 12 minutes into the second-half. They could have been further ahead but Stephen Maher’s penalty, after Tommy Fitzgerald was hauled down, was well saved by James Rigney although Maher did manage to point as Offaly failed to clear their lines.

By the midway point of the half there were still seven points between the sides with Joe Bergin, Conor Doughan and Brian Carroll finding the target for Offaly with Willie Hyland, Neil Foyle and Charlie Dwyer replying for Laois.

Offaly were kept to long range efforts with points from Stephen Quirke and a Carroll free being cancelled out by two frees from Stephen Maher.

A further point from Brian Carroll five minutes from time left six between the sides but Laois still to be cruising to victory. Offaly threw everything forward in the closing minutes and they set up a nervous finish for Laois when Dan Currams struck a lose ball close to goal and managed to get it past Eoin Reilly to close the gap to three.

A point from Stephen Maher extended the gap to four but Offaly scored a second scrappy goal when Dermot Mooney latched onto a lose ball to leave one between the sides. Laois were also reduced to 14 men in injury-time when Brian Stapleton picked up a second yellow card but they managed to hold on with an insurance point from Brian Stapleton sealing the win.