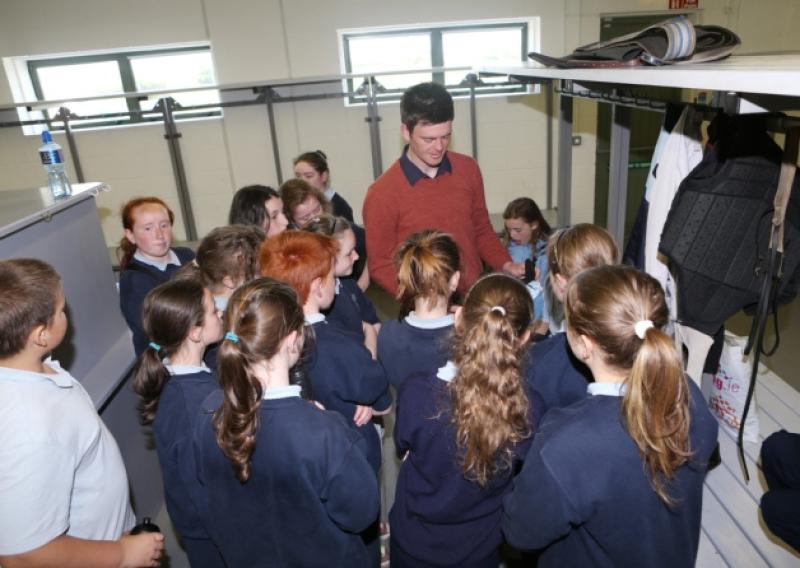 The HRI initiative aimed at educating school children about racing and building ties between racecourses and their local communities, has finished for the summer and recommences in September.

Trainers such as Jim Culloty, James Leavy and mentor from TG4’s Jockey Eile, Tucker Geraghty gave pupils a glimpse into the life of a trainer and provided live demonstrations on how to tack up a racehorse.

Trainer Jim Culloty, commented: “It was great to be involved in HRI’s Kids’ Club day at Killarney Racecourse and a pleasure dealing with the inquisitive school children. Obviously getting young people interested in racing is important for the future of the industry.”

Students were also treated to talks from well-known jockeys like Andrew Thornton, Jamie Codd, Mark Enright and Robbie McNamara. They were brought into the stewards room, weigh room and changing room and shown all the equipment used by a jockey.

Speaking about his experience at the Curragh ‘Go Racing Kids’ Club Day’, Jockey Jamie Codd, said: “It was a great, fun day out for the school kids, seeing all the different aspects of racing and I was delighted to be able to share my experience as a jockey with them.”

Pupils also enjoyed sessions with representatives from R.A.C.E (Racing Academy & Centre of Education), where they got to try out a horse simulator and with Marie-Lou Donnelly from ‘Front Runner – Racing Club for Kids’ who showed them a range of racing equipment, props and visuals required for racing.

Each attendee received the new ‘Go Racing Kids’ Club’ Racing Book, which includes jockey profiles, interesting horse facts, games and puzzles as well as a section on the history of Irish racing and the anatomy of the horse.

Lorraine Page, HRI Marketing Executive, remarked: “On behalf of HRI, I’d like to thank all the jockeys and trainers for taking time out of their busy schedules to attend our Go Racing Kids’ Club days. Marie-Lou Donnelly from Front Runner-Racing Club for Kids and Tony Denvir from R.A.C.E. also put a lot of time and effort into making the experience fun and interactive for the children. We’ve received great feedback and will be planning more days during the next school term.”