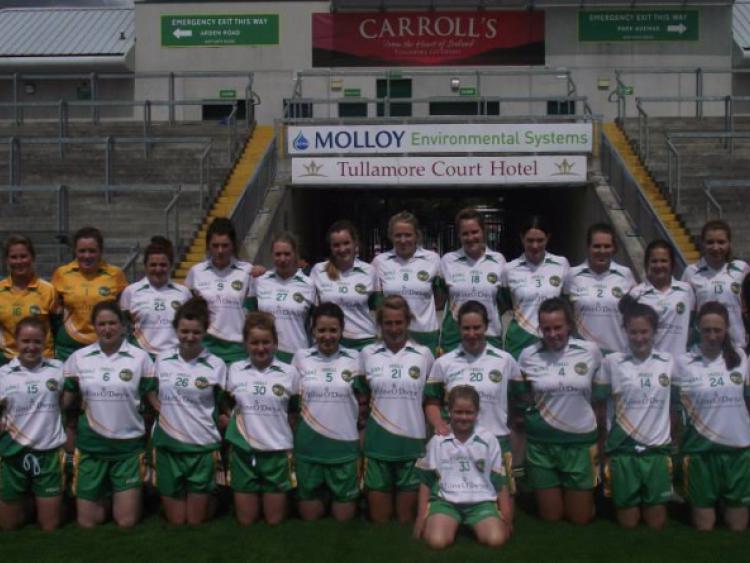 The Offaly Ladies had another successful day at the office on Sunday when they took on the Derry in the 2nd round of the All Ireland Series in O’ Connor Park, Tullamore.

The Offaly Ladies had another successful day at the office on Sunday when they took on the Derry in the 2nd round of the All Ireland Series in O’ Connor Park, Tullamore.

The impressive 1-20 to 1-1 win puts Offaly another step nearer to a big day in Croke Park on September 29.

The game started with a magnificent goal from midfielder Emma Dalton on the two minute mark. Derry put their emphasis on defence which was hard to break down and worked to a certain degree as Emma Dalton’s goal was Offaly’s only goal of the game.

Player of the match Orlagh Heavey and Mairead Daly were in fine shooting form and clocked up 17 points between them, three from frees. Points also came from the hard working Treasa McManus, Claire O’Brien and Emma Dalton.

This was a great opportunity for the management team to try out other players on the bench, starting six of their subs in the starting fifteen and running on four more during the game. This signifies the battle for places on the team.

The battle will start all over again for the Faithful County next Sunday in the final group game when the beaten Leinster finalists Wexford travel to O’ Connor Park to seek revenge for losing out on the Leinster Title earlier this month, when Offaly Ladies defeated them on a 3-17 to 1-14 score line. Throw in at 2pm.

Once again a word of thanks to Offaly GAA for the use of our County Grounds and also thanks to Hugh Lynch Sponsor of the Offaly Ladies Senior and Junior Championship 2013 for the lovely food served to both Teams.