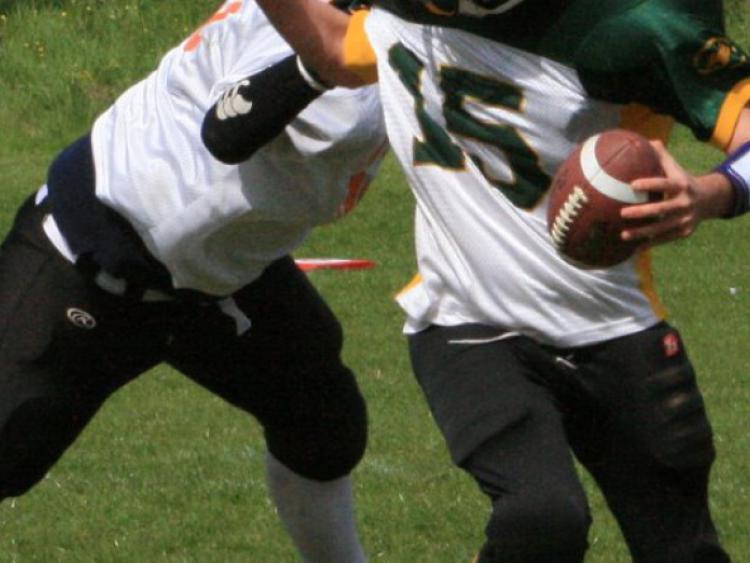 A very tough and physical game of American Football took place in on Sunday afternoon in Spollanstown at Tullamore RFC, in which the Tullamore outfit were looking to bounce back from an unexpected defeat two weeks earlier against a determined North Kildare side.

A very tough and physical game of American Football took place in on Sunday afternoon in Spollanstown at Tullamore RFC, in which the Tullamore outfit were looking to bounce back from an unexpected defeat two weeks earlier against a determined North Kildare side.

However their opponents the Dublin Dragons are also in the title hunt and where coming to try an inflict another defeat on the Phoenix.

The Tullamore side trailed for much of the game but two big defensive plays and a late field goal ultimately guided them to victory.

The game started with both sides jockeying to gain the upper hand in the territory battle with the Dragons running in two scores in the second quarter and it gave the Dragons a 12-0 halftime lead and seemingly in the ascendency.

It was all to do for the Phoenix in the second half and from the very first engagements the Phoenix team began to display a steely resolve in their play and were rewarded when Quarterback Erin Kelly passed to receiver Brendan O Toole from 20 yards for a touchdown after a determined drive down the field early in the third quarter. All the momentum was now with the Phoenix and were pushing back their Dublin counterparts but not getting that equalising score.

Into the fourth and deciding quarter and when the Dragons had the ball and trying to calm down the game their quarterback threw to the outside receiver downfield but the drive was stopped by a super piece of athletic defending by cornerback Rory O Keefe who intercepted the ball and got possession for the Tullamore team.

Another series of driving down the field lead to a Phoenix equaliser with David Maloney catching from Erin Kelly’s pinpoint pass with two minutes left.

The Dragons had the ball but the Phoenix defense came up big by stripping the Dragons quarterback of the ball with recovery by Phoenix linebacker Jim Lynam.

Tullamore drove down the field slowly gaining ground with the Dragons defense giving it’s all to preserve the draw.

However from about 30 yards from the goal and 20 seconds left in the game David Maloney stepped up with a massive field goal kick between the posts to give the Phoenix the go ahead score which decided the game with a 15-12 victory to Phoenix which leaves them second in the championship table one point behind Waterford.

It was a defiant display by Tullamore and the embodiment of the never say die attitude the team possesses.

If anyone is interested in the Midland region in trying American Football in Tullamore please contact 086 8615689 anytime for more information.