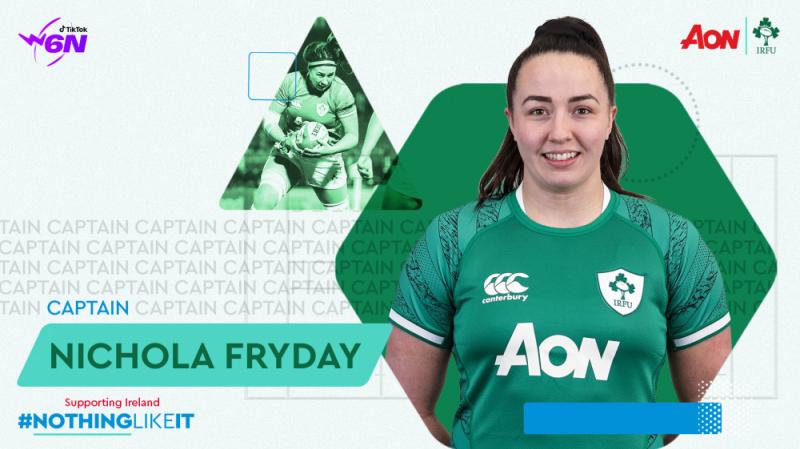 Head Coach Greg McWilliams announced the appointment of the Kilcormac woman on Monday.

Since making her Test debut in November 2016 against Canada, Fryday has been an ever-present in green, making 22 appearances.

The 26-year-old second row has grown in stature in the Ireland engine room, becoming an important leader both on and off the field, most recently winning the Aon Player of the Match award in the November Test win over USA at the RDS.

Fryday, who players her club rugby with Exeter Chiefs, will lead Ireland into Saturday's TikTok Women's Six Nations opener against Wales at the RDS (Kick-off 4.45pm).

"It is the greatest honour in anyone's sporting career to play for your country, so for me to be given the opportunity to captain Ireland is an incredible honour and I'm grateful for the chance to lead this team," the Offaly native said.

"It is a special moment for me and my family, who have been my supporting rock throughout my career. It is a privilege to lead this group of players as we embark on a new journey with Greg and the coaching team, and we are all incredibly excited to get to work this Saturday against Wales.

"It is a fresh start for the team and we're really looking forward to getting out in front of our family, friends and supporters at the RDS this weekend, implementing the hard work we've done over the last number of weeks and showcasing ourselves on the Test stage in green."

On today's announcement, McWilliams commented: "Nichola epitomises everything about our environment - she is a brilliant person, a vocal voice within the group and a player who gives her all for the green jersey. She was a standout candidate for the captaincy and I was delighted to appoint her to the role.

"It was a special occasion on Sunday as we delivered the news to Nichola and the group, and to have her parents and family join the meeting via Zoom made it extra special. We are working hard every day to become better as a team and individuals and I'm confident we are moving in the right direction ahead of the Championship."