Doubt over Laois County Council's plans to buy the houses 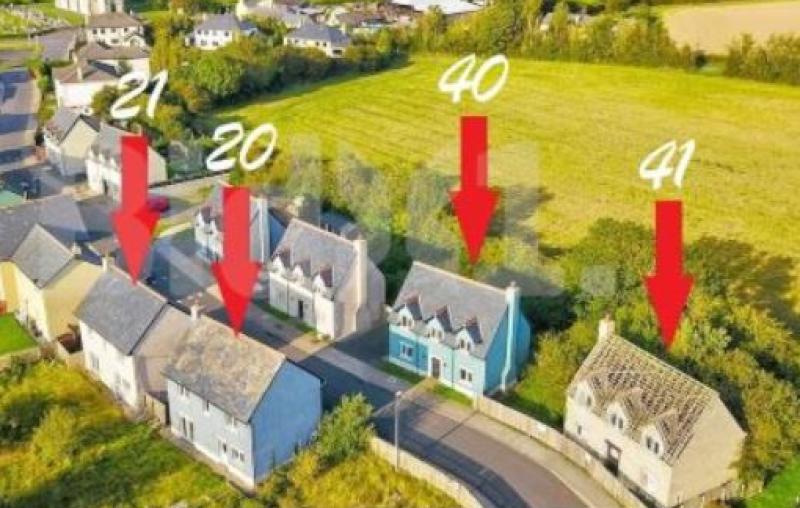 The four houses for sale

Four houses in an unfinished housing estate which Laois County Council has bid for are going under the hammer at a public auction next week.

The four detached three-bedroom properties in Laois in the badly unfinished Celtic Tiger estate in Laois are described "at varying stages of completion" by the auctioneers but being promoted as an investment opportunity.

The incomplete homes are located in Bruach Na hAbhainn estate in Kileen village near the Kildare and Carlow borders off the N80.

The guide price at the BidX1 auction for numbers 20,21,40,41, is €300,000 which works out at €75,000 per home. The auctioneers say they may be purchased on behalf of family members or friends so they can live next door to each other. More below picture.

There are gardens to the rear and off-street parking. Each property extends to approximately 104 sq. m (1,119 sq. ft.).

However, pictures published by the auctioneer reveal that some of the buildings are almost derelict. Indeed a process was underway at Laois County Council to declare the buildings unlivable.

Despite this, council officials told county councillors in July 2020 that county hall has made an offer to buy five of property boom homes in the estate.

The move would also see county hall using public funds to renovate the homes which were built by private developers and end up in the ownership of bailed-out bank AIB.

Philip McVeigh, Senior Executive Engineer, replied in writing to a query from Cllr Aidan Mullins as to whether the buildings would be declared derelict.

“The council is keen to return the properties, nos 20, 21, 29, 39, 40, 41 Bruach na hAbhainn, Killeen, Maganey to use for housing purpose as soon as possible," the Laois Council engineer informed Cllr Mullins.

"The council has carried out an initial assessment of the properties in their current condition and has made an offer to purchase the five properties. This offer was made subject to the council carrying out a full assessment, including the interior of the properties,” he told the Portarlington Graiguecullen Municipal District meeting.

The Leinster Express understands that the dereliction process has been paused. It is also understood that two substantial bids were made by the council for the properties both were rejected. One bid related to five houses while the second related to the four homes that are now on the market.

The abandonment of the estate and problems with dereliction and the response of banks has been raised several times since the property crash with Laois County Council officials.