'The thought of losing the house was heartbreaking' 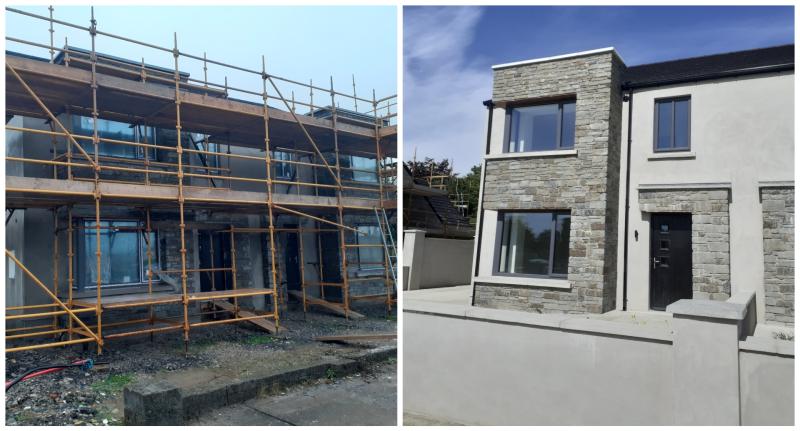 It's been a strange year in the Irish property market. The first lockdown in March effectively put a stop to mortgages; people were halted at various stages of applications and the banks played the 'wait-and-see' game. New rules came about as a result of government wage supports and the general employment situation in the country during Covid-19. Below, Offaly Express editor Justin Kelly discusses his year trying to buy a house against the backdrop of a global pandemic.

They say buying a house is the most stressful thing you'll do in your life. Try doing it during a global pandemic. For my sins, that's what I attempted to do in 2020 - well, it actually all started in 2019.

My girlfriend and I began house hunting at the end of 2019 and after toying with the idea second-hand homes and fixer-uppers, we landed on a new development in rural county Offaly, a small place called Bracknagh, close to the border with Kildare and Laois.

Some of the 16 houses were built but unfinished and we viewed one in December.

Despite the concrete floors and lack of stairs, we fell in love with it. We have family in the area and the house itself was exactly what we were looking for. Local builders and tradesmen were hurrying around the site on that crisp December morning and we were sold.

We had already been saving and so paid a booking deposit and were 'sale agreed.'

We knew the house wouldn't be ready for snagging until maybe February of this year, so we went back to our lives; working, saving, picking out furniture and crashing the Pinterest app for home ideas. All the usual stuff. It was an exciting time after all as first-time buyers.

We couldn't do a snag on the house but we hit plenty of other snags along the way, that's for sure.

The Help To Buy application took a long time. Between applying in 2019 and then reapplying in 2020 and waiting for confirmation of our rebate, it was well into February before we were ready to move to the next stage and discuss contracts.

Not long after, Ireland diagnosed its first case of Covid-19 but for a while at the end of February, it was still a small concern. We were picking out tiles and kitchen cabinets and counting down until we could move in.

At this stage, we were hoping that, by early May, we would be turning the key in the door. It's fair to say things escalated and didn’t quite go according to our script from there.

March brought the first wave of Covid-19 to our shores and the country went into lockdown. The fences in Bracknagh were bolted shut as building sites and almost all other industries were shuttered during the worst of it.

Like many others, our priority was to keep ourselves and our loved ones safe and my girlfriend and I spent almost two months apart. We were both living with our parents in two different counties as we saved for this house so the two-kilometre and county-specific travel restrictions hit us hard.

This was made all the more difficult as we pictured the house we had dreamed of moving into for over three months virtually finished but sitting empty. The country went into a state of economic flux as we all waited daily in front of the TV to hear the latest virus numbers.

They surged and more sectors of the economy closed. The stress was certainly building.

Both my girlfriend and I were lucky to hold onto our jobs and full salaries - something we thought would reflect well on our application with the banks. At this stage, we were already approved for our mortgage and had received our official letter of offer.

We had even picked our rate, set up the direct debit mandate, filled in dozens of forms and provided an Argos catalogue-sized dossier of bank statements and payslips. We ticked all the boxes, or so we thought.

When restrictions lifted and I could finally see my girlfriend again, I was driving to her house in Kildare when I caught the tail end of a radio interview on RTE.

‘The new temporary wage subsidy scheme is halting mortgage drawdowns,’ the contributor explained. Couples who had exchanged contracts and paid huge deposits were now being told they couldn't draw down their money if one or both parties to the mortgage were having their wages topped up by the scheme.

In a lot of cases, these were people still working full-time, albeit from the kitchen table. I soon discovered my employer, like many others, was availing of the scheme and those dreaded letters - TWSS - were printed on my payslips.

My heart sank and I broke the news to my girlfriend.

We both just fell silent as we looked blankly into the glare of our phones, Googling and finding dozens of articles about people in our very situation.

The thought of losing the house was heartbreaking. While we knew there were bigger things going on in the world, we had been saving and doing everything right for more than two years to get this house and now it could be taken from us at the final hurdle.

If one person keeps you sane during the process, it's your mortgage broker. Ours was always positive that 'it will get sorted' but she did confirm the banks would require a new 'clean payslip' before facilitating our drawdown.

The 'magic payslip' as we christened it was one without reference to TWSS on it, however, finding out when I would get it was like answering the question: how long is a piece of string?

The scheme was in place until the end of August with all the soundings from government suggesting it would be extended - and so it came to pass. The July Stimulus brought more bad news for our situation with the scheme extended until March 2021.

All the while, our mortgage approval was running out and would need to be extended. New statement needed, possibly a whole new application. Understandably, we had the developers and auctioneers looking for an update. This was something we couldn't give them. There was talk of us being moved down to a later phase so the house we agreed to buy could be sold to buyers who were ready to go.

We explained that our financial situations hadn't changed. I even secured a letter from my employer confirming my employment through, and beyond, the subsidy scheme and the pandemic. It wasn't enough for the banks or anyone else, it seemed.

There was a silver lining in the July Stimulus, however, at least with our bank and our application. They still wanted a clean payslip and the new way in which the wage subsidy would be paid and the vastly reduced rates were our saving grace.

Those letters I never want to see in my life again - TWSS - would not appear on my payslips from September onwards because the scheme is paid directly to the company on a 'per head of staff' basis and not directly to the employee.

While I now have a new tax bill on the way in January, I can live with it knowing that this detail changed everything. Receiving the magic payslip in September was like getting a golden ticket for Willy Wonka's Chocolate Factory. I was the granddad rising from his slumber to dance around with it at the end of September.

The bank accepting it and moving us to the next stage was the greatest relief. We have now snagged our house, albeit five months later than we thought, and will be in our new house before Christmas.

The summer garden furniture we bought in preparation for lovely BBQs can stay in storage for another year.

While this is coming to a happy conclusion for us, it's not for so many other people; people who lost their jobs and were basically blacklisted by banks no matter what stage of application they were at. They were picking furniture and saving for years too.

The health implications, especially mental health, are huge and can't be ignored. The housing market may be the least of most peoples' worries, but at the core of it is real people just trying to buy themselves a home.

It's a tough place to be right now.