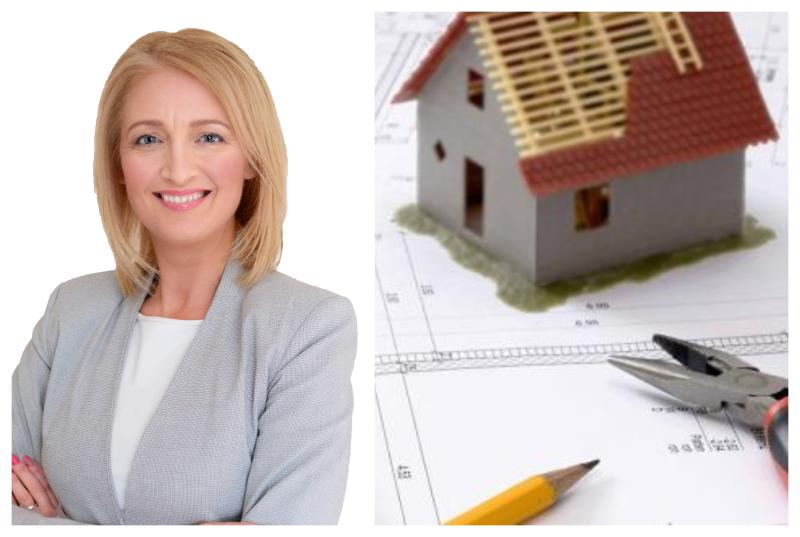 Christine Traynor is the chairperson of Edenderry Chamber of Commerce and a Fianna Fáil local election candidate for the Edenderry Electoral area in Offaly.

As the weeks and even years pass for some home seekers especially those who are on the Housing List, speaking with people at the doors they tell me they have been on the Offaly Housing list for five years and more.

This very serious and while housing is once again beginning to take off, here in Edenderry, unfortunately, it is not enough. By the time the planned social housing is built in Edenderry, those people I have spoken to will be on a housing list for an additional two years.

The National Government Rebuilding Ireland Policy has failed! Statistics show that the policy has struggled to have any effect and this housing crisis continues to be the biggest risk to the economy and one of the greatest societal challenges the country
faces.

We are told the years of austerity are apparently behind us as the economy improves, we are near full employment and household wealth is higher than pre-recession levels. However, for those in the midst of a housing crisis that has been dragging on for more than a decade, talk of recovery is cheap.

Speaking with local single mums, young women, families and older people, it is very clear that the recovery is not widespread. Rural towns like Edenderry are clearly left behind and everyone feels this.

The impact and stress on individuals who are seeking housing support and who are not getting it is far-reaching. It is a hidden cancer, destroying lives. Children are being held back, mental health is gravely affected and this policy, in my mind has
ensured long-term adverse effects on the individuals themselves and on society as a whole.

There has been an inexplicable delay in completing housing around the country, and according to the latest official figures, there are 71,858 households on the social housing waiting lists across the 31 Local Authorities. Of these, over half (35,929)
have been waiting for four or more years, and over a quarter (17,964) have been waiting for seven years or more.

Questions remain among home seekers as to how this problem will be resolved once and for all, they deserve an answer and they deserve hope.

Local Authorities are being stymied in their attempts to build homes and still nothing is done. Minister Eoin Murphy announced that the national figures for the delivery of social housing clearly demonstrate why the housing crisis is getting worse. He
blames local authority construction, which he says is happening at a snail’s pace, his answer, is that we need to see a much faster delivery of new build houses as well as more ambitious local authority targets backed up by adequate resources.

This sounds good, but the reality is that Local Authorities no longer have the control that they did in the past as the Fine Gael Government removed their autonomy, and worse still not all local authorities have the resources to start building, otherwise, I suspect they would be building.

Housing in Edenderry is virtually at a standstill, we have very little new houses coming on stream and there is little or no rental accommodation.

The fact is that people deserve fairer distribution of funding, especially across the Edenderry Electoral Area. It is true that people want to stay near their families if they can. They don't want to be isolated, left out, or sent far away from family
members, who support them, care for them and help them.

Housing is no longer an option and in my area, there is so little choice in the community. People who find themselves in unfavourable circumstances, especially with regard to financial or social opportunities need State support they need and deserve security and familiarity they should be able to access services and still have the support of family and community.

It is extremely troubling that housing has become so complicated. The layers of bureaucracy are unnecessary. Urgent clarity needs to be given to the Housing issue. It is a scandal that must be resolved and is unfathomable that policymakers cannot
figure it out.

People deserve to know where they stand - Older people and young mums and families are understandably anxious, and this issue of being trapped on a housing list for half a decade or more is quite simply disgraceful and needs to be brought to an end.