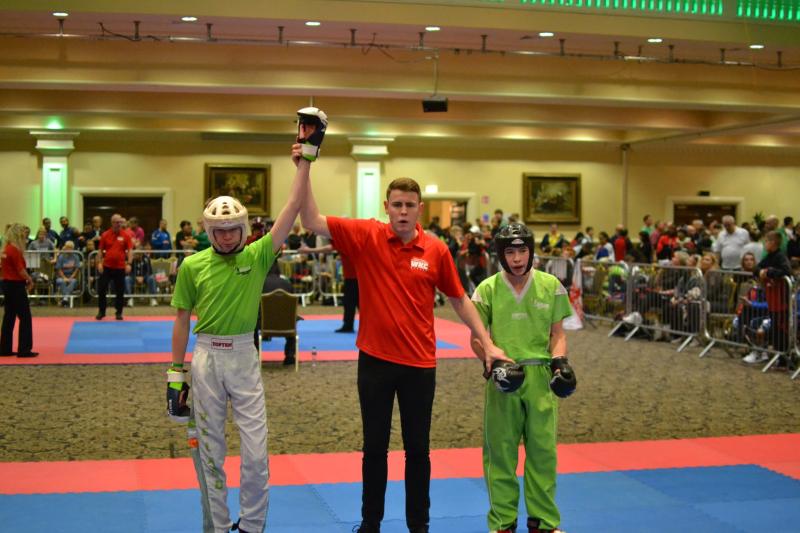 There was huge success for the Edenderry Kickboxing club at World Karate and Kickboxing Commission(WKC) World Championships at Citywest this week. The finals drew to a close on Friday with Team Ireland winning the male Senior Team event for the first time in 8 years.

Team Hurricane Sensei, Jay Daniels, played a major part in the success representing Ireland through the rounds and the final where they had a comprehensive win over Puerto Rico. Jay also won bronze in his individual section bowing out to a Guatemalan fighter.

Team Ireland also won silver in the 15 to 17 years boys Team Event with the Tait brothers Nathan and Brandon and training partner Aidan Kerr (Celbridge) making up the team who came so close to defeating the American team. The teams were equal at 17 each after 3 frantic fights and continued on until the Americans finally won 23 to 21.

Aoife Reilly was the first medallist of the week with a bronze medal in her section losing out to a Canadian in her semi final. Over Tuesday and Wednesday Leah Grant, Brandon Tait, Luke McCann and Dylan Whelan all qualified for Friday’s finals, with Luke and Dylan reaching both the points and continuous finals against each other.

So Friday came and with six finalists it was always going to be busy for coaches Jay Daniels, Claire Brennan and Celbridge’s Robbie Cuff. By the end of the day the alliance would have a 100% record and six WKC World Champions. Leah Grant led the way with a comprehensive victory over her Canadian opponent, directly followed by Nicola Basson with a comeback victory; 4 points down with a minute to go in round 2, Nicola went on to win by 3 points over a shell-shocked American.

Next up was Luke McCann and Dylan Whelan in their points final and Luke won over the 2 rounds. Brandon Tait strode onto the mats with an air of confidence and never looked back beating a fellow Irish fighter with ease to make it 4 from 4.

Nhuy Plunkett, the youngest member of the team, put on a magnificent display against her Puerto Rican opponent and won by a massive margin. Last fight of the day was Luke and Dylan in continuous and Luke was victorious again to become a double World Champion.

This was a magnificent week with well over a dozen international teams and the organisation was second to none. Citywest was packed to the rafters every day and the atmosphere was electric.