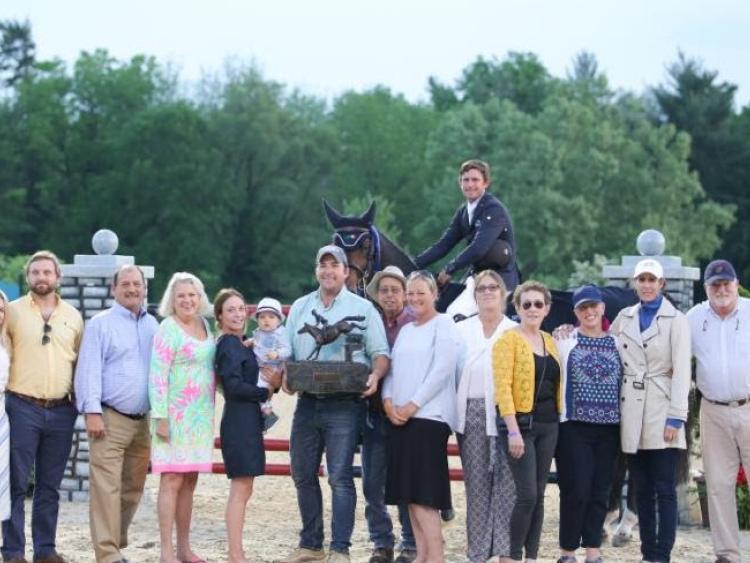 The family of the late Mary Rena Murphy presents Darragh Kenny with the award, along with owner of Balou du Reventon, Ann Thompson

Offaly’s Darragh Kenny amazing run of form continued as he has added to his growing list of victories at Kentucky Spring Horse Show in the USA, taking another win in Saturday's $131,000 Mary Rena Murphy three-star Grand Prix – this time riding Balou du Reventon.

Kenny guided Babalou to victory in the $131,000 Hollow Creek Farm Grand Prix in Lexington a week ago and this time he got the better of 41 fellow competitors with the Ann Thompson-owned Balou du Reventon, whom Kenny just started riding two weeks ago.

Eleven combinations made it into the jump-off with Kenny and Balou Du Reventon crossing the line clear in 41.54 seconds, ahead of America’s Margie Engle who took runner-up spot with Royce (42.08). Four Irish riders had made it into the second round with Richie Moloney and Carrabis Z finishing fifth, Lorcan Gallagher and Hunters Conlypso sixth, while Andrew Bours finished 11th with Diego.

Speaking afterwards, Darragh Kenny was obviously delighted with 12-year-old Balou Du Reventon and suggested he may be an option for this years World Equestrian Games.

“I’ve known the horse for a long time. I always thought he was an amazing, incredible horse. I never thought I’d be lucky enough to get the chance to ride him and I was very lucky that my owner, Ann Thompson, decided to buy the horse for me and it’s one of the most incredible horses I’ve ever sat on in my life. He doesn’t want to knock jumps down. I think he jumped eight rounds over the last two weeks and he didn’t knock a jump down once.

“Babalou, another one of my horses, is already in Europe and she does St. Tropez and Cannes [for the Global Champions Tour], so it was cool that he stepped up and did so well. The plan is that he is supposed to be another option for me for the World Equestrian Games and it looks like he’s going to be that, so we’ll just keep building him and hopefully I get there,” Kenny said.

The Mary Rena Murphy Grand Prix is held every year in honor of the late Mary Rena Murphy, an important part of American horse show history. Murphy was known for helping many top hunter and jumper professionals begin their careers, in addition to being a successful horse show organizer. She began her career in her hometown of Lexington, Kentucky. She is most known for promoting the Kentucky Horse Park and helping shape the park into what it so well-known for today, world class hunter and jumper shows that not only cater to world class competition, but also to all levels of the equestrian sport.