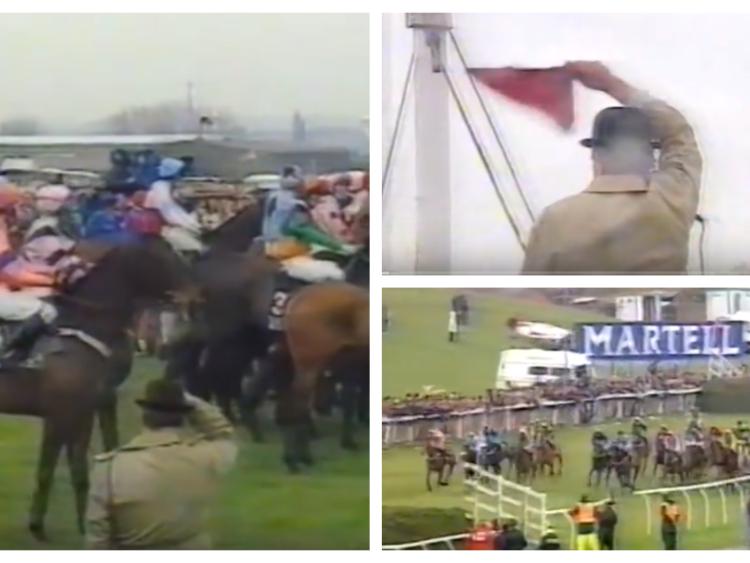 Ahead of this year's running of the Aintee Grand National, we've taken a trip into the archive, 25 years in fact, to the 1993 running of the race - the race that never was.

In 1993, the world’s most famous race ended in farce, and its line in the history books has been left blank. The race that never has ironically become one of the most famous moments in racing history, and on its 25th anniversary, we relive the drama on the day, the resulting investigation, and the record-breaking voided winner long since forgotten.

On a breezy overcast April day at the Liverpool track, on good to firm ground, 39 runners lined up for the 147th renewal of the Aintree Grand National. The day was dramatic from the get-go as the runners and riders circled at the start, seconds before the off, a group of around fifteen animal rights protestors broke onto the track close to the first fence. Some jockeys stood up in their stirrups to alert the starter to the intrusion, but the real drama was yet to unfold.

Upon the first attempt at a start, a number of runners broke the tape, and the starter, Keith Brown, frantically waved his red flag for the riders to turn around. On the second try, jockey Richard Dunwoody became tangled in the tape, and Brown recalled the field again, but there was a problem. His red flag did not unfurl, and 30 of the 39 took off to the roar of the expectant Liverpool crowd. Race commentator, Peter O’Sullevan called the debacle: “They've been recalled — but, the majority don't realise that it is a recall! They're going down to jump the first.”

And so it went - the field trundled out onto their first circuit as officials, trainers, and the crowd tried frantically, but to no avail, to stop the race. By the time they jumped the famous sixth fence, Becher’s Brook, only one of the horses had fallen, and the illegitimate contest seemed unstoppable.

BBC's commentary team of Peter O'Sullevan, John Hanmer and Jim McGrath repeatedly told the bemused viewers, “It has got to be a void race.” As they tackled the water jump at the end of the first circuit, most riders became aware of the issue, and pulled up, including most people’s idea of the winner, Zeta’s Lad, who was unbeaten in five starts that year.

Despite this exodus, 14 competitors continued onto the second circuit, and Sure Metal and Howe Street led the field until they both fell at the 20th fence. Following a spate of fallers at the 21st, seven horses went on to complete the course. As they passed the infamous elbow, with an energy sapping 494 yard run-in ahead of them, four horses vied for the lead.

At the post, a strongly ridden 50/1 shot, Esha Ness was in front. He was to be denied his career defining moment when the race was declared void, and it was an added blow that his winning time (9m 1.40s) was in fact the second fastest ever recorded in the long history of the race.

A re-run of the race was ruled out by the Jockey Club, and bookmakers’ hands were forced. They had to repay over £75 million to punters, while a worldwide television audience of 300 million were left disappointed. The trainer of leading fancy Zeta’s Lad, John Upson was particularly enraged, pushing this point: “I spent a year getting my horse ready for this day. I have sweated blood with him. I have come here today absolutely ready to run him and this is what happens. I think it's an absolute disgrace.” He later said he reacted out of frustration, and pure adrenaline.

VIDEO: The debacle unfolds during the 1993 Aintree Grand National

Following the initial condemnation on track, an inquiry chaired by High Court judge Sir Michael Connell was tasked with accrediting accountability, and reforming the start procedures for future Nationals. Partial blame was placed at the door of starter Keith Brown, who was officiating his final race before retirement, but most blame was put on the recall official who was placed further down the track, Ken Evans, for not noticing the second false start.

Speaking to Justin Kelly upon the 20th anniversary of the race, jockey Richard Dunwoody recalled the day, and the confusion that was abound after that ill-fated second false start. "I can say I did hear the starter recalling us though with the noise of the crowd it was unclear."

"Jamie Osborne confirmed it when we pulled up at the first fence as he was on the outer near the tannoy," Richard continued.

Speaking about the aftermath, Dunwoody commented, "I would never blame the starter for it, especially with the protesters, the sagging tape, the recall man on injury benefit and scared for his life with 40 horses charging at him. The buck should have stopped with the Jockey Club."

As it turned out, the Jockey Club endorsed a 34-page working group report which recommended updated starter regulations. However, a future introduction of technology was shelved due to a lack of overseas success. Instead, the starter tape was made sturdier, two more radio officials in contact with the starter were introduced to wave yellow fluorescent flags following a false start, while a third assistant starter was placed further down the track. This third official is permitted to follow breakaway false starters in a car to stop them if they fail to heed his initial warnings.

The chair of this working group, Andrew Parker Bowles was emphatic in his assessment of the incident, and strong in his assertions for future contests. He remarked, "You start 7,000 races a year with flagmen and it went wrong just three times last year, but one of them was the Grand National. It won't happen again.”

Since 1993, every running of the race has started without any problems. The pity amidst the pandemonium is that Esha Ness’s record-breaking performance was discredited, and a great ‘winner’ was written out of history.