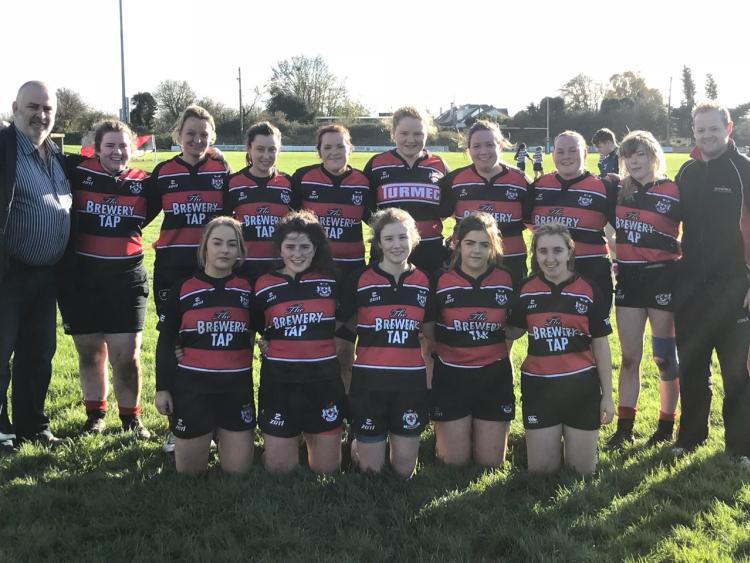 Looking to build on last weekend's win away to Omagh, Tullamore took to the pitch in Spollanstown on Saturday afternoon just before 2:30pm to welcome visitors Bective Rangers in division 2C of the All Ireland League.

Having previously met towards the end of last season, in the 2B/C play-off semi-final where Tullamore came out on top, one could suspect that Bective were out for revenge despite their current positioning at the bottom of the table.

With a cluster of clouds looming overhead as play got underway, it wasn't long before the heavens opened. Thankfully this didn't dampen the spirits of a strong home crowd that showed out to support the lads.

Unfortunately the wet conditions didn't suit the home side as they struggled to gain any real possession in the opening minutes. Bective took full advantage of this, scoring in the right corner after just 15 minutes. A further blow arrived 10 minutes later as influential prop Ger Molloy was sin-binned after conceding numerous penalties. Despite being a man down, Tullamore began to build some phases and made some real ground on the pitch through some strong carrying from winger Brian Gilligan, centre Aidan Wynne and back-rower Lemacki.

Full-back and resident place-kicker Karl Dunne who had been in flying form the previous week, struggled with the strong cross-field wind and was unlucky to see 2 early penalty attempts sail wide of the post.

The deadlock finally broke just after the half-hour mark, as winger Brian Gilligan and #8 Barry Bracken interlinked in what was a fantastic piece of play. After a cross-field kick from Dunne, Gilligan caught the ball on the 5 meter line, offloaded to Bracken who froze in his tracks, causing the defender to turn, which then allowed Bracken lob an inside pass for Gilligan to run in and score. This was to be the final score of the half as the two sides went in 5 - 7 at half time.

The second half, however, was a lot more in-tune with the the free flowing rugby of the previous weekend. Less than 10 minutes in, a successful penalty attempt in front of the post from Dunne, saw Tullamore go 8-7 in front after some fantastic pick and go efforts from the pack inside the Bective 5 meter line. Second-row replacement Mike Tormey made a massive impact off the bench, putting Bective under serious pressure at the ruck. There were also moments of magic from out-half Sam Burns, who made numerous clearing kicks in defence as the visitors lobbed on the pressure in search of another score.

The final five minutes of play were tense to say the least, as the mounting Bective pressure finally caused Tullamore to concede a dangerous penalty, which the visiting out-half duly kicked. Now 2 points down, it was do or die for the home side, as the crowd spurred them on. In what was the final piece of play, Bective were reduced to 14 men and the referee awarded a Tullamore penalty, way off to the left of the posts.

Anxiety levels were at an all time high as Dunne stepped up to take the all important kick. Many of the crowd had to look away, unable to bare the pressure of what lay ahead - thankfully Dunne recovered his form and the ball sailed between the two posts, giving the home side an all important one point win. It may not have been pretty, but it was very much needed!

Tullamore travel to Sligo next weekend and will be looking to build on their current 7th place standing as the winter break approaches.

This re-fixed clash between Tullamore and Edenderry in the U16 Leinster League finally took place on Saturday having been postponed as a result of Storm Brian. However, unlike the meteorological tempest that was Storm Brian, the game itself proved to be a rather tame affair.

From kick off, Edenderry went on the attack and helped by some poor Tullamore ball handling, gained territory. Luckily, these initial errors did not prove too costly as Tullamore were well on top in the scrum and didn’t give Edenderry any attacking options from the set piece. Tullamore settled into the game well and found their rhythm and during this period, the entire team worked hard at the breakdown and supported one another in the many breaks that lead to the four Tullamore tries scored in the run up to half time. The score going into half time was 26 – 7 to Tullamore.

The start of the second half saw Tullamore on the front foot once more, scoring two tries before Edenderry even got their hands on the ball. It can be said that Edenderry grew into the game in the period just after these scores. Tullamore seemed to lose composure and focus during this time which resulted in the home side conceding a large number of penalties. To Edenderry’s credit, they capitalised on this and ran a try over the Tullamore line right under the posts.

Tullamore found their focus after conceding this try and ran in a number of tries in the ten minutes leading up to the final whistle. The match finished with a score-line of 64-14 in Tullamore’s favour. The performance showed improvements in work rate and team play for Tullamore at times. However, these improvements will have to be maintained over the full period of the game in upcoming matches against stronger opponents. Well done to the U16 boys and their coaches/manager.

The U12s travelled to Birr RFC on Sunday for a blitz involving two teams from Birr and a team from Cashel.

The first match against one of the Birr teams was a bit of a mixed bag with the stop start nature of the game interrupting Tullamore’s flow when we had the ball in hand. There was a much improved performance with regards to rucking with Oisin Phelan, Sam Dunne and Jack Hanlon working super hard to secure the ball. The tackling also improved with Tadhg Clear and Eric Martin putting in some good hits. Once Tullamore got into full flow Birr had no answer to the running and handling of Rory Grehan, Cillian Bourke, Shane Marsden, Cian Lynam, Kevin Healy and Joe Keenaghan with one lovely try straight off a move from the training ground. Tullamore ended up 5-2 winners.

In the second match against the other Birr team, the coaches asked the players to step it up another level and they did just that. Birr tried hard but when Tullamore protected their own ball at ruck time and moved it quickly the tries just kept flowing. The highlight was a kick-off return by Joe Keenaghan who ran the length of the pitch to score. There was more super tackling in this game especially from Kevin Healy, Aaron Gorman and Robert Murphy and the support play of Cian Lynam, Robert Murphy Shane Marsden and Jack Hanlon in particular was great to see resulting in super team tries. Final score was 13-1.

The final game against Cashel was a much tougher affair. Cashel were very physical and this was probably the toughest game Tullamore have had in a while – exactly what the team needs. This was a game where lads needed to just knuckle down and get through the hard work. That they did and scored 6 great tries to win by 1. The lads defended really well with some great tackling and counter rucking. As always, a few things to work on in training but well done to all.

The Tullamore Ladies 2nds team had their second game of the season on Sunday last at home in Spollenstown against Longford. The 3 week break from their previous game didn't seem to upset this side as they hit the ground running and put alot of early pressure on inside the opponents 22.

After numerous penalties were conceded by Longford ladies in the first 5 minutes the breakthrough finally came when Patrice Browne barged over from close range to give a deserved lead. Not to be outdone by her sister, Evelyn Browne scored a similar try only a few minutes later to double the lead for Tullamore.

Confidence was growing and after a fine backs move that took Aoife Byrne just short of the line Ann Marie McKeon forced her way over from close range. Just before half time good link up play between Roisin Kane and Ashling Magner saw Ashling race clear from 30 yards to score a fine try. Roisin converted to give Tullamore a 22-0 lead at the break. In the 2nd half after a few changes had been made Longford grew into the game and their scrumhalf made a good break but as she was placing the ball down in the corner Roisin Kane came in with a diving tackle and managed to strip the ball clear for a fabulous try saving tackle.

Clever kicking in the 2nd half gave Tullamore good field position and after a scrum 10 metres from the Longford line replacement Rachel Dunne popped the pass to Evelyn who ran over the opposition scrumhalf to score a well taken try. The best score of the game was saved for last, Tullamore gathered in the restart and from the resulting ruck the ball was spread wide where Evelyn threw a great dummy pass and ran through the gap before passing to flying winger Aoife Byrne who raced in from the halfway line. Ashling converted to extend the lead.

In the last play of the game Longford got their reward with a try to leave the final score 34-5 to Tullamore. This young team will keep building as the weeks go by and their next game is away to Swords on the 19th November.