A busy weekend for the club 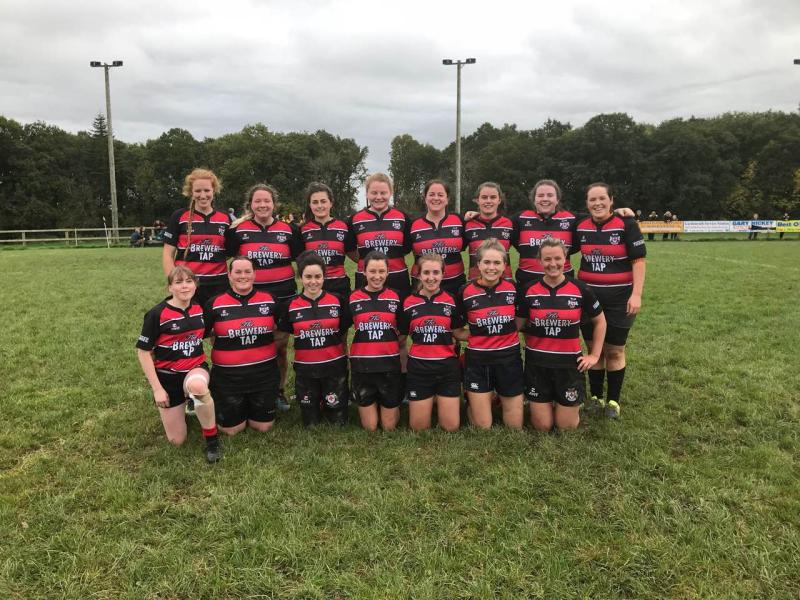 Tullamore travelled to Seapoint in search of another win in their strong league start. Tullamore started very strong hitting Seapoint hard from the kick off. Tullamore missed a penalty to the right of the posts 3 minutes in. From the 22 drop out Tullamore regained possession and great hard running from Brian Ryan brought Tullamore back into the oppositions 22. Tullamore's pack kept the momentum going with great pick and drives. Great carries from John Burns and Eamonn Bracken set up John Dooley to storm over the line for Tullamore's first try of the Day. Conor Hegarty kicked the difficult conversion to leave it 7-0 after 8 minutes. Both teams shared possession for the next 20 minutes with Seapoint getting more and more into the game. Tullamore's scrums began to become under pressure as the game went on. Seapoint kicked a penalty in front of the posts after alot of attacking pressure.

Tullamore's Stephen Pyke stole a line out on the 30 minute mark in their own 22 which was spread quickly too Conor Hegarty who chipped it over the defense and regained possession. Brilliant piece of individual skill. Unfortunately he was caught on his own and turned over on the ground. Seapoint spread it wide straight away and ran in for their first try. 7-8.

On the stroke of halftime Seapoint had a 5 metre scrum and held strong inching their way forward to leave an easy platform for their 8 to score their second try which was converted. 7-15 halftime.

Second half kicked off and Seapoint continued their pressure from the start of the second half getting two unconverted tries with 20 minutes left. Tullamore regrouped under the posts and went hell for leather at Seapoint from then on. Stephen Pyke, Daragh Neary and Jamie Lynam all carried well. Sam Burns making his debut at scrum half kept the ball moving fast. Seapoint were buckling with the pressure. This left a lovely little gap for Eoin Farrell who ran in from the 22 to score under the posts. Hego converted wasting no time. 14-25 15 minutes left.

Tullamore once again regained the restart and ran hard at Seapoint with big carries from Aidan Mealiffe and Tiernan Mealiffe. Mark Mc Grath and Stephen Davis proved tricky in attack. Seapoint lost 2 men to yellow cards for continuous foul play at the ruck. Tullamore took a quick penalty and Sam hit powerhouse Geoff Scully who ploughed his way over the line in the corner. Conversion was narrowly missed but Tullamore were within site and had a loosing bonus point. 19-25. Seapoint added a penalty to leave the scre 19-28 at the final whistle.Tullamore are away to Old Belvedere next week where they hope too get back to winning ways.

We would like to congratulate our Durrow men on winning their Championship campaign - Bobby O Dea, Conor Hegarty and Brian Geraghty.

Tullamore welcomed back Glen Bagnall from injury and he made a big difference when he came on, making plenty of tackles and disrupting every ruck he got near.

After a poor team performance last week, Tullamore needed to get back on track and set down a marker for their season’s ambitions. Straight from the kick-off, Tullamore went on the attack, pinning North Kildare deep in their own 22. Despite some shaky rucks, Tullamore managed to maintain possession for a sustained period. After 8 minutes, North Kildare’s defence finally succumbed, allowing Dylan McDermott to cross for Tullamore’s first try, converted by Luke Egan. From their own kick off, North Kildare managed to obtain possession and a break down the wing was snuffed out by a great tackle by Darragh Drea, resulting in a knock on from North Kildare. The ensuing Tullamore scrum was well on top and was successful in winning a scrum penalty which put Tullamore back on the front foot. Tullamore continued to reside in the North Kildare half and traded penalties with their opposition. From the second Tullamore penalty, Dylan McDermott found some room to cross for his second try, once again converted by Luke Egan. Again from the North Kildare kick off, it was like ‘déjà vu’ when Daragh Drea shut down any chance of a North Kildare break up the line. Although Tullamore pushed hard and made several breaks, the scoreboard showed 14-0 to Tullamore going into half time.

At the restart, a long North Kildare K.O. wasn’t dealt with by Tullamore and the home side won a scrum on Tullamore’s 5 metre line. Tullamore seemed to have North Kildare in all sorts of trouble in the scrum but the resulting penalty to North Kildare came as a surprise to many. Some lessons must have been learned from last week as this penalty was well fronted up by Tullamore’s forwards, resulting in a Tullamore penalty. The relief was only temporary as we failed to find touch, giving possession straight back to North Kildare who obliged by going on the attack. Following a scrum for North Kildare, this period of pressure from them was finally ended by a Scott Milne turn over. From the penalty, no mistake was made this time as Luke Egan drove the ball out over the line, deep in North Kildare territory. Tullamore won the line-out and piled the pressure on North Kildare until Dave McElduff took a line any 13 would be proud of and carved through under the posts. Of course, this was converted once more by Luke Egan. Not to be outdone by his second row team mate, Luke Egan waltzed the next try over the whitewash to leave an easy conversion for himself. While everything at this stage was going Tullamore’s way, North Kildare valiantly tried to stem the Tullamore tide. However Mc Elduff got back over their line, scoring the fifth try for Tullamore, converted by Egan.

The next Tullamore try followed shortly when a 40 metre straight run by Conor Neary was finally halted metres short of the North Kildare line. A lovely clear out by James Galvin Daly made fast ball available for Christian Conroy who duly obliged and finished with a great try, converted by Egan. It was all Tullamore still with North Kildare not getting any rewards for their efforts and Liam Farrell crossed the line to mark his seasonal return for the wing. Luke Egan’s flawless boot converted the try to keep his 100 per cent record for the day, Tullamore winning 49-0. While it was great to be back to winning ways and green shoots of improvement were evident in many areas, this win must be taken in the context of the opposition on the day. There is room for improvement and better work rate is needed to get back to the high standards this group has set for themselves. As they say, “A lot done, a lot more to do”. Well Done 16s!

Tullamore Ladies 2nd XV made history on Sunday last by making their first ever appearance for the club. And the signs were very encouraging for this group of players going forward. The early nerves were settled very quickly as Tullamore were on the front foot from the start and some positive carrying led to a break from scrum half Clodagh Hanniffy who powered through a couple of tackles and ran under the posts to score. Roisin Kane converted. Almost immediately from the restart Clodagh broke off from the back of a ruck and outpaced the defence to score again under the posts. Roisin converted once more. Confidence was growing and after some more positive play Amanda Hollingsworth and Veronica Smyth both added well worked tries,. Substitute Katrina McInerney wasnt long on the field before she raced away to score a try. The second half was more closely contested as a few changes were made but Roisin Kane and Maria Brackn both added tries before North Meath got a consolation score. The final score was 43-5 and is a great confidence boost to this young group of players. The girls have a two week break before taking on Longford at home in Spollenstown on Nov 5th.