Soccer: Tullamore unlucky to lose out in top of the table clash 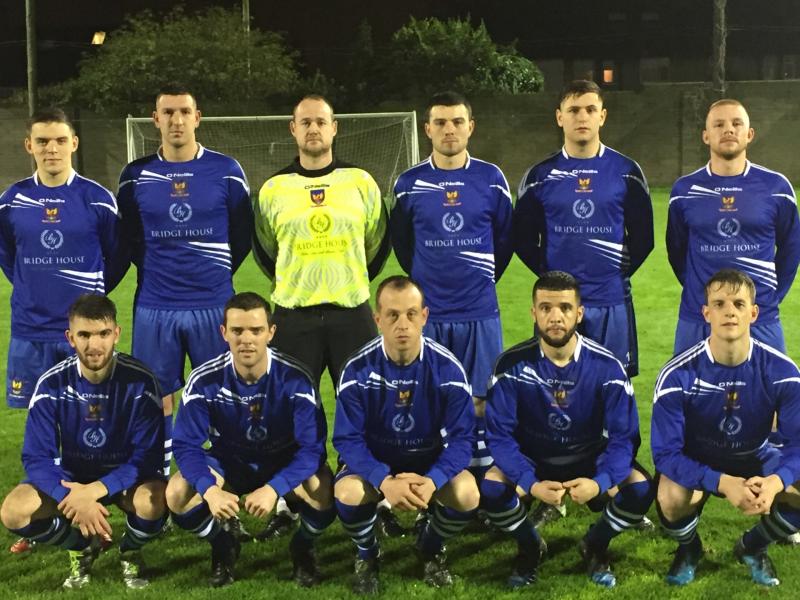 Tullamore travelled to Dublin last Friday for this much anticipated clash between the top two teams in Division 1 and it certainly lived up to expectations as both sides served up a game that thrilled and entertained in equal measure.

The visitors were first to threaten when Stephen Francis was taken down and from the resulting free kick Kevin Williamson brought a fine save from Ian Doran in the home goal.

They again went close when Enda Carroll won back possession and picked out Shane Dolan on the right and his low cross was fired narrowly wide by Robert Bracken. As they continued to press Eoin George and Carroll combined to create an opening for Dolan but his effort flew outside the right post and then Carroll sent George clear in the inside left channel but the keeper saved well.

As Rovers hit back Philly Nolan played a great diagonal ball to Jordan Nolan but his cross was too deep while, at the other end, Stephen Francis and Enda Carroll created space for the overlapping Shane O’Connell but he failed to hit the target. The home side nearly opened their account against the run of play when Shane Dolan got on the end of Karl Young’s free kick, but he headed over when well placed.

As Tullamore tightened their grip on the game Shane O’Connell picked out Kevin Williamson with Ian Doran doing well to hold his swerving cross-shot down low to his right and he again went close when Adam Crowther knocked Eoin George’s dangerous cross out to him, but his effort flew narrowly over.

The game was held up for a number of minutes on the half hour when Alan O’Connell was injured following a collision with Philly Nolan as he managed to hook the ball clear from the speedy winger. Nolan was again in the thick of the action when he latched onto a knock-on but Stuart Carroll brought off a great relieving tackle to deny him.

As the tension continued to mount Stephen Francis played a great ball through to Eoin George on the left but his cross was too near the keeper while, at the other end, Carroll twice came to his sides rescue as Nolan and Young threatened to breach the Tullamore defence. Nolan was proving a real thorn in their side as O’Connell punched his searching cross to safety and he again went close when he got on the end of Graham Curran’s through ball, but Stuart Carroll got across to avert the danger as the referee brought a pulsating first half to a conclusion.

The second half exploded into action when, within minutes of the restart, Philly Nolan cut in from the right and crashed a tremendous shot off Alan O’Connell’s left upright and then Stephen Francis picked out Brendan Bracken 35 yards out and he sent a great drive inches over the Rovers bar.

Tullamore should have hit the front on 50 minutes when Robert Bracken intercepted an attempted pass from Ian Doran and skipped past the keeper, but he failed to get enough purchase on his shot and Paddy Seery got back to block his effort on the line. As they continued to press Brendan Bracken played a lovely ball out to Shane Dolan on the right and his dangerous cross was knocked behind by Graham Curran and, from the resultant corner, Kevin Williamson flashed the ball across the face of the goal.

The home side hit back with Shane O’Connell doing well to cut out Nolan’s fine run on goal and then Sean Martin fired in a terrific 25 yard effort that was brilliantly tipped around the post by Alan O’Connell. Rovers were now in full flow as Nolan’s shot was deflected outside the right post and then Ger Carroll picked out Karl Young but O’Connell was equal to his effort. As the pressure continued to mount Kevin Williamson grew in stature as he alternated between anchoring midfield and repeatedly helping out in defence.

Brian Norris lifted the siege with a fine run on the left but his cross was headed narrowly wide by Robert Bracken and then Eoin George latched onto a clearance and cut through the middle only for his shot to drift inches outside the left post. The home side went back on the attack and with 10 minutes remaining they made the crucial breakthrough when the slippery Paddy Obinuru picked the ball up on the right and weaved his way into the area before blasting the ball past Alan O’Connell and into the back of the net.

Brian Francis was introduced up front but, despite Tullamore’s best efforts, they could not conjure up an equaliser as Rovers ran out winners of a tremendous game of football that was a credit to all concerned.

Following the match manager Tony O’Sullivan described his team’s performance as the best he has seen in his four years with the club. Given that they lost the game it is an indication of the quality of the opposition in Division 1 and also that Tullamore have well and truly arrived in the top flight.

This defeat sees them drop to third spot in the table but they are still well in the hunt with games in hand over the top two sides. In what was a great team effort there were outstanding contributions from Brendan Bracken, Stuart Carroll and Stephen Francis, but the man of the match award went to Tullamore’s indefatigable midfielder, Kevin Williamson.