Soccer: Injuries and suspensions take a toll as Tullamore lose out in cup

Tullamore are back at home in league action this Wednesday 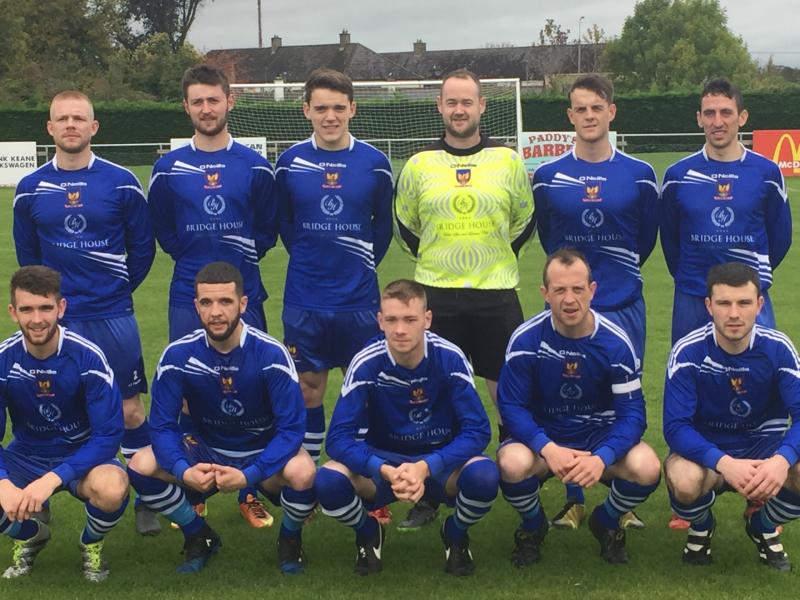 Injuries and suspensions took their toll as a severely depleted Tullamore made their exit from the Metropolitan Cup in Lucan last Sunday.

Playing into a strong wind, Tullamore made the perfect start when, after only two minutes, Robert Bracken gained possession on the left and fired in a great cross that Shane Dolan controlled on his chest before side-stepping his marker and drilling the ball into the bottom corner of the net.

Bracken again created danger when he sent Kevin Minnock clear but he was taken down on the edge of the area with Enda Carroll’s free kick being well taken by Darren Kelly in the home goal.

As Lucan began to gain the upper hand Alan O’Connell did well to keep out Brandon Payne’s effort and then David Fagan twice headed over from corners. Tullamore hit back with Kevin Minnock playing a lovely ball through to Robert Bracken but he was forced wide while, at the other end, Derek Kelly was denied by a fine save from Alan O’Connell.

Jack Carey broke clear but pulled his shot wide and he again went close when he brought another fine save from O’Connell but, with 35 minutes on the clock, they struck for the equaliser when Jonathan Lucki’s corner kick went straight into the net.

Five minutes later they jumped into the lead when, following another corner, Brandon Payne headed home. On the stroke of half time Tullamore nearly levelled when Kevin Minnock’s excellent cross picked out Shane Dolan but Kelly brought off a great save to ensure his side retained their one goal advantage at the interval.

On the restart Tullamore went on the attack with Darren Kelly doing well to keep out Stephen Francis’ long range effort and then Robert Bracken went on a great run that carried him past four defenders, but his ball into the area was fired inches wide by Enda Carroll. With an hour gone the referee waved away claims for a foul on Carroll and, as Lucan counter attacked, the ball broke out to Andrew Bracken who fired a great shot past Alan O’Connell. Minutes later they struck again when James Lee finished off a fine move to give his side a three goal cushion.

Tullamore refused to throw in the towel and with 65 minutes gone Stuart Carroll latched onto a headed clearance and sent a tremendous 20 yard effort crashing off the crossbar and minutes later Robert Bracken was taken down in the area with Shane Dolan slotting the resultant penalty home. Lucan hit back with Jack Carey breaking through the middle but Alan O’Connell pulled off another fine save to deny him.

As Tullamore began to enjoy the better of the exchanges Stephen Francis twice fired narrowly over and Mark Grennan had two shots well saved by Kelly, but they failed to breach the home defence again as Lucan ran out deserving winners of a very entertaining game.

Manager Tony O’Sullivan will be hoping to have his side returning to something resembling full strength for their home game with Dunboyne AFC this Wednesday as they look to increase their five match unbeaten league run. There were excellent contributions from Enda Carroll, Stephen Francis and Kevin Minnock, but the man of the match award went to Tullamore’s outstanding goalkeeper, Alan O’Connell.