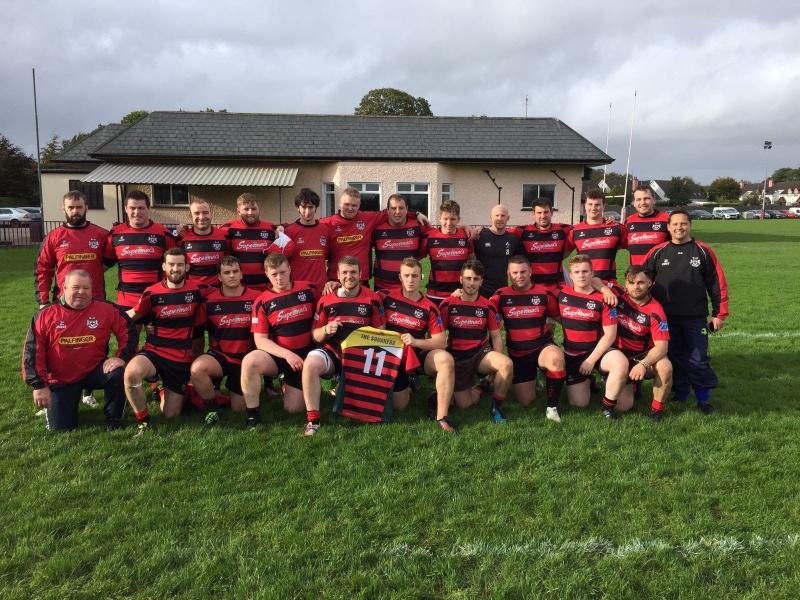 Tullamore had a fine win over Navan on a day the club remembered Adam Mangan and retired the #11 jersey in his honour.

It was a magnificent, hard fought game. Tullamore got off to a very strong start, attacking Navan from the kick off. Big carries from the forwards made great yards with John Dooley bursting through Navan's defense from six metres to claim Tullamore's first try. Captain Conor Hegarty calmly slotted over the conversion from a difficult position. Tullamore led 7-0 after five minutes.

Tullamore regained possession from the restart and made their way back up into Navan's 22. Here a penalty conceded by Navan gave Hegarty the opportunity to split between the posts and bring the lead to 10-0 after nine mins.

Navan began to fight back but Tullamore's defense really stood up with big tackles from David Cleary, Eoin Farrell and Odhran McIntyre keeping Navan at bay. Navan managed to get on the score board with a penalty just before the end of the first quarter. A second attack soon after resulted in Navan's number 8 run in a try from 10 metres out. A missed conversion left the score at 10-8 to the hosts.

SEE ALSO: Tullamore lose out to Malahide in All Ireland League

Pack leader Tiernan Mealiffe got his troops together and got them into gear, driven on by very experienced scrum half Andrew Hyde. Tullamore dominated the majority of scrums hugely influenced by the recently appointed props Darragh Neary and Shane Fleming. A massive carry and hand off from Jerome Scully gave Tullamore a quick ruck. Hyde changed the direction of play and Hegarty got a lovely ball, sold a lovely dummy and ran in for a very slick try to the delight of the crowd. Hegarty then converted to leave it 17-8 at halftime.

The second half showed the attacking and defensive qualities of both teams. Bryan Ryan, Hegarty, John Burns and Cleary to mention a few put massive hits in and put their bodies on the line against a massive Navan pack. Dan Cronin put in another massive shift today at hooker. Navan pressured the maul in the last play of the game to come away with a losing bonus point with a converted try. Every man put their hand up today and played extremely well leaving team selection very hard for Kevin and co next week.

Player of the Day - Conor Hegarty

All players would like to wish Dave Cleary the best of luck on his travels and new beginnings. Dave is a massive loss for us and a huge asset to any club that gets him abroad.