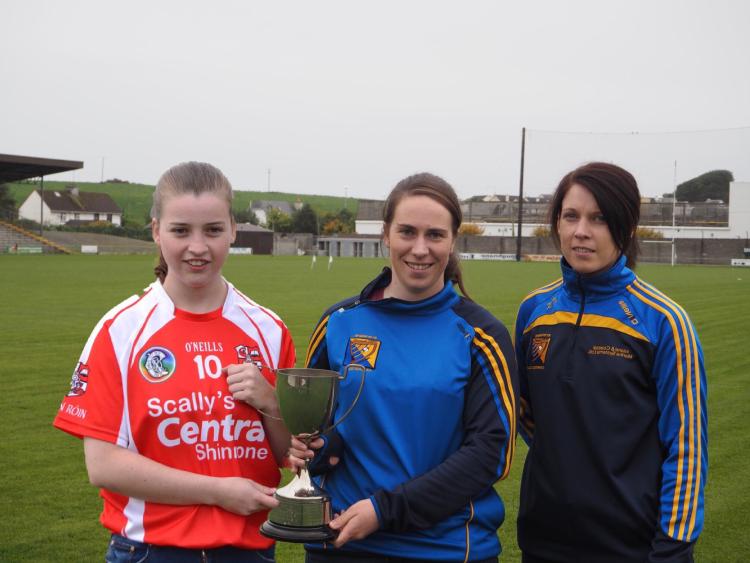 In a repeat of the 2015 senior camogie final, St.Rynagh's and Shinrone will go head to head this Saturday evening in a bid to be crowned HQphysio.com senior champions.

This sides met earlier in the championship with St Rynagh's causing a shock with a ten point victory over Shinrone  with huge performances from Linda Sullivan, Siobhan Flannery and Mairead Daly. However form leading up to the final suggests this will be a much tighter affair.

It has been an eventful path for both teams to the final. Shinrone opened their campaign with a four point loss to Birr but quickly made up for that loss with a 15 point win over Lusmagh/Drumcullen. Shinrone then went on to demolish Naomh Brid before losing their final round game to St Rynagh's.

St Rynagh's on the other hand had a shaky patch midway through their campaign but haven't had a bad day since. A huge team performance saw the blue and gold register a 20 point win in their opening game against Naomh Brid before losing to Birr and drawing with Lusmagh/Drumcullen. Since then St Rynagh's have been unstoppable beating Shinrone in the group stages, defeating Kinnitty in the quarter-final and toppling unbeaten Birr in their semi-final game.

Offaly players Linda Sullivan, Siobhan Flannery, Grainne Dolan, Aoife McLoughlin, Ellen Gilligan, Mairead Daly and Roisin Egan all line out with St.Rynagh's and like Shinrone they have plenty of players who aren't county players who are sure to make a huge impact on the game. Kate Kenny is an up and coming talented young player while Elaine Sullivan and Helen Dolan are sure to play huge roles on the day.

Micheala Morkan, Grainne Egan, Kelly Sammon, Orla Maher and Kerri McLeish all played in the Offaly jersey this year however Shinrone boast plenty of county final experience with leaders such as Michelle Davis, Marion Creane, Mary Molloy and Fiona McLeish who has been exceptional between the posts all year.

Speaking at the captain's morning Leona McLeish, vice-captain was eager to state that Shinrone will have a game plan this time round

"They played a running game, which we didn't expect. There wasn't anything at stake that day we were both in a quarter-final but we're just focusing on St Rynagh's and not the tag of three in a row."

Like Shinrone, St.Rynagh's were keeping their cards very close to their chest talking ahead of the game.

"Shinrone on county final day is a different animal," Siobhan Flannery stated, "We had to preform in our last game against them but that day will have no bearing on Saturday evening."

The day will also be an extra special occasion for St Ryangh's with their male counter-parts in action in the senior hurling final the following day.

If St Rynagh's were to win both finals, it would be the first time ever that a club completed a senior double. There's plenty at stake for both teams but wherever the Senior Offaly camogie cup goes on Saturday evening, history will be made come 6pm.