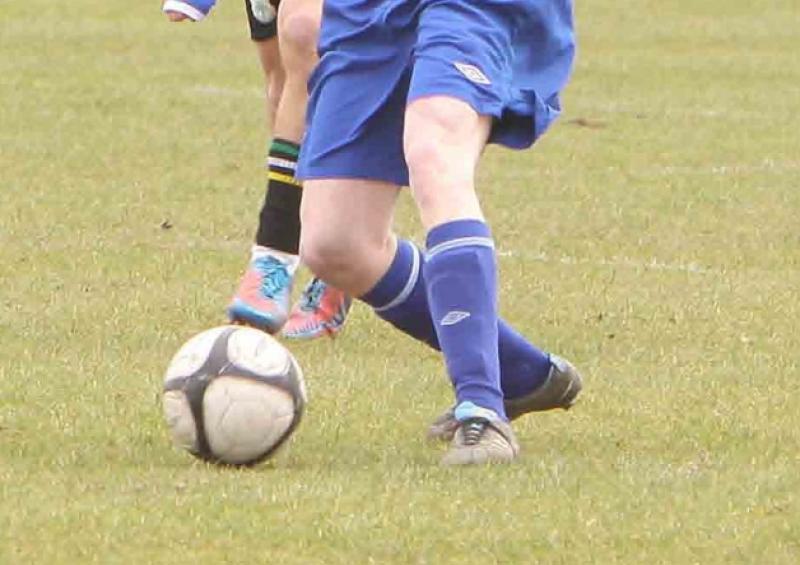 Tullamore travelled to the Whitehall Stadium in Dublin last Friday and, after a wonderful battling performance, came away with all three points as they lifted themselves into second place in the league table and extended their unbeaten run to five games.

Formed back in the 1920’s, Home Farm’s panoply of former players boasts such luminaries as Johnny Giles, Ronnie Whelan, Gary Kelly, Kenny Cunningham and Richard Dunne, to name but a few.

However, following three promotions in a row Tullamore are currently carving out their own piece of history and were in no way overawed by their illustrious surroundings. They had a dream start when, after only five minutes, Stephen Francis played a lovely reverse pass to Kevin Williamson and his pin-point cross was headed powerfully home by Brian Francis at the near post.

Home Farm’s response was immediate with Dean McNevin picking the ball up wide on the right and firing in a cross that Ollie Cahill thumped off the crossbar. Cahill just failed to make contact with Aaron Brilly’s diagonal ball into the area and then good play by Anthony Kavanagh saw him release Brian Francis through the middle, but David McNamara was quickly off his line to avert the danger.

As the home side began to enjoy the better of the midfield exchanges Brilly picked out McNevin on the right but Shane O’Connell got back to clear. As the pressure continued to mount Alan O’Connell turned Gavin Carroll’s effort around the post and the Tullamore keeper was again called into action when he did well to keep out Aaron Brilly’s long range effort.

The home side were now in full flow as Bradlee Hand headed Gavin Carroll’s left wing cross over and then Sean Goulding got on the end of Dean McNevin’s cross but his well struck volley flew narrowly over the bar as the referee brought the first half to a conclusion with Tullamore holding on to their one goal advantage.

Manager Tony O’Sullivan’s half-time team talk seemed to do the trick as Tullamore tightened up midfield and defence and began to slowly wrest back control of the game. A great run on the left by Kevin Williamson caused confusion in the home rearguard but his cross failed to pick out a colleague while, at the other end, Sean Goulding was denied by a superb relieving tackle from Brian Gill.

With an hour gone they nearly increased their lead when Brian Francis latched onto Michael Lynch’s weak back pass, but he failed to get enough purchase on his shot and the ball drifted outside the left post. As Home Farm hit back Alan O’Connell did well to turn a dangerous free kick behind and, from the corner, David McGrath headed narrowly wide.

A terrific run by Robert Bracken saw him play a lovely ball through to Macdarragh O’Neill in the inside left channel but his shot flew inches outside the near post. As the game continued to ebb and flow McGrath’s long range effort was well taken by O’Connell and then Brian Gill played a great ball through to Brian Francis, but his attempted lob failed to beat David McNamara in the home goal.

With 75 minutes gone Tullamore were dealt a hammer blow when central defender Gill was sent off for a second yellow card but with Brendan Bracken coming on they resolutely stuck to their task. As Home Farm tried to bring their numerical advantage to bear Ciaran O’Sullivan nearly broke through but Rory Condron was on hand to clear and then Eoin Murray was denied by a tremendous last ditch tackle from Brendan Bracken.

With the referee playing seven minutes injury time the visiting support had to sweat out the closing stages as Tullamore held out for a priceless three points.

Special mention to Tullamore’s second squad who were also in Dublin on Friday evening and came away with a very impressive win over Cabinteely in the Leinster Cup, handing new team boss Ken Doyle the perfect start to his managerial career.

Tullamore Town are back on the road this Sunday when they take on Lucan United in the Metropolitan Cup and are at home the following Wednesday, October 4, against Dunboyne AFC. In what was an outstanding team performance there were excellent contributions from Brian Gill, Rory Condron and Kevin Williamson, but the man of the match award went to Tullamore’s captain and playmaker, Stephen Francis.

Fixture
Tullamore are at home to Dunboyne AFC next Wednesday, 4th October, in the Leinster Senior League, kick-off 7.45 pm in Leah Victoria Park.