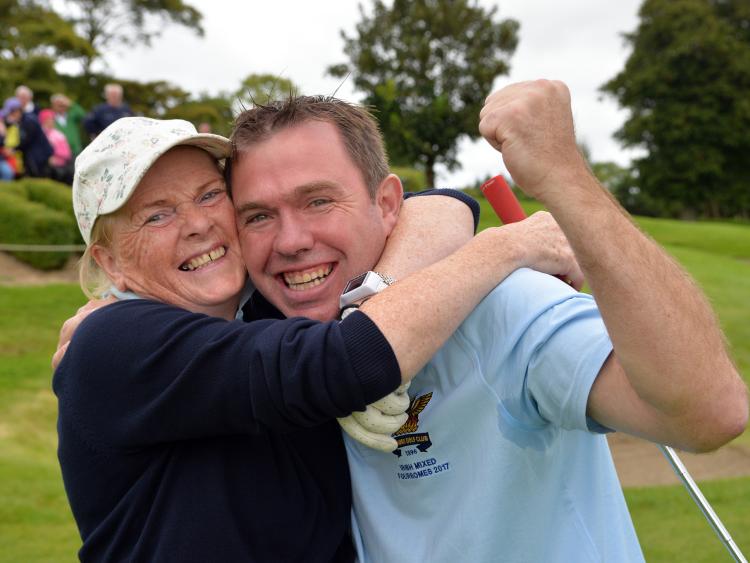 Tullamore bridged at 17 year gap and notched up their third win in the I Need Spain Irish Mixed Foursomes, having triumphed in 2000 and at the inaugural event in 1972.

They faced a stern test in Adare Manor, the Limerick side having beaten Ulster champions Malone in the semi-final on Friday at Castlebar.

On a day that started wet and windy, the sun emerged as the first point of the day was won by Matthew Grehan and Fiona Flanagan for Tullamore with a comprehensive win over Alan Purcell and Antoinette Meghen by 5/4.

The Munster side squared things as Tony Davern & Ina Desmond ran out winners on the final green beating the Tullamore pairing of Eoin Marsden and Richelle O'Neill by 2 holes.

Martin Darcy and Eilish O'Connell added a second point for Tullamore with a win over Martin Hayes and Breda Naughton before Eoin Moran and Phil Mann levelled things again for Adare with a 2/1 win over Eoin Flanagan and Emily Donohue.

The Tullamore pair went ahead very early and took a commanding four hole lead around the turn. Despite the best efforts of Murray and Keating the damage inflicted early on was too much and victory was sealed for Tullamore in front of a thronged gallery on the par-three 16th green next to the clubhouse.

It was an emotional day for Cooney, the self confessed ‘granny’ of the team. “I’m absolutley elated. It means so much to me to be part of this team this year because I have a lot of memories of 2000 but I won’t go there now. I must thank my partner Colm who was an absolute pleasure to play with and he won this match for me.”

The side was captained by Joe Morris and Una Marsden.

“It’s brilliant!” Morris beamed afterwards. “It’s a wonderful achievement . We knew we had a very strong team when Una and I put this team together. It came to fruition thank god.”

The Tullamore side gelled very well in both the semi-final against Athenry and in the final, something that Marsden paid tribute to. “They gelled brilliantly. There’s no real secret, they all bonded very well and got on very well. They all practiced together, it was great.”