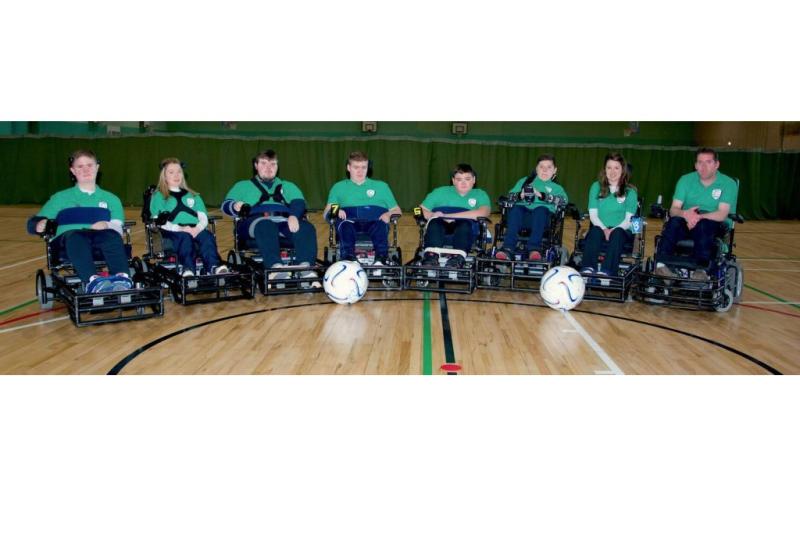 Three members of the squad hail from Offaly. They are Kinnity brothers Thomas and Sean Donogher and Tullamore native Neil Sheehan.

The team recently qualified for the Powerchair World Cup which takes place in Florida next year. However, the costs involved in travelling to Florida and competing are very significant.

Powerchair football is a team sport for disabled people who use power wheelchairs. Two teams of four players use powerchairs equipped with foot guards to attack, defend, and spin-kick a 13-inch football.

Ireland are ranked among the ten best powerchair football teams in the world and have every chance of returning from Florida as world champions.

Fundraising
While the team have secured qualification for the tournament, there are still large costs to be incurred if they are to compete and represent Ireland at an international stage.

Getting Team Ireland to Florida is a financial and logistical challenge. Each athlete has two chairs to transport (their own personal powerchair and their sports competition chair).

The team will have to ship or fly all of the sports chairs to Florida if they are to arrive safely in time for the players to use in competition.

In addition, the team have to pay for the flights of eight athletes, eight professional carers and five coaching, management and technical staff.

After that, the team have to pay for the tournament itself. This includes covering accommodation, food and transport for their delegation of 21.

Finally, there are travel, medical and sports insurance costs, as well as the hiring of medical equipment out in the USA, beds and hoists.

Getting Team Ireland to Florida will cost around €50,000 in total. In light of this, the team have joined forces with PledgeSports, a crowdfunding platform dedicated to sport.

With a fundraising target of €10,000, the team would appreciate support of any value as it will help them take a step closer to Florida.

Those who wish to contribute can visit the team’s fundraiser at this link - https://www.pledgesports.org/projects/powering-team-ireland-to-florida/