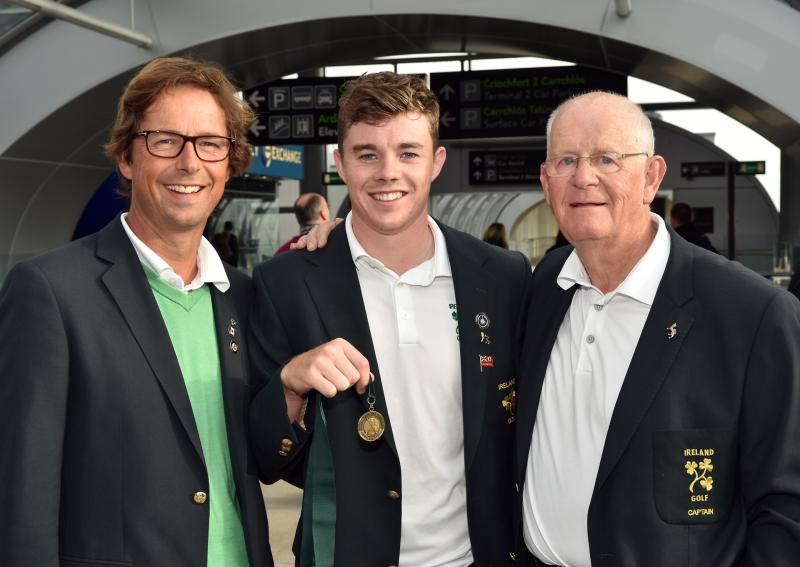 Chasing a fourth successive win at the Home Internationals next year, Ireland captain Tony Goode has named a 17-man panel for the 2017 season.

Together with Castle’s Alex Gleeson, who won the AIG Irish Close Championship in August, Warrenpoint’s Colm Campbell, the reigning Flogas Irish Amateur Champion, and Whitehead’s John-Ross Galbraith, beaten finalist at the Close, they will provide a wealth of experience.

Conor O’Rourke (Naas) made his Ireland debut at the European Amateur Team Championship in July on the back of his breakthrough win at the St Andrews Links Trophy and he has since added the Nassau Invitational title.

South of Ireland champion Conor Purcell (Portmarnock) retains his place in the squad, as do Robin Dawson (Tramore/MU), who captured the World Universities Championship this season, and West of Ireland winner Jonathan Yates (Naas).

Reigning Irish Boys Champion Mark Power is one of four new additions. 16-year-old Power joins the senior panel after a phenomenal season that saw him win the Irish Boys Championship as well as the prestigious Peter McEvoy Trophy. The Kilkenny teenager joins Castle’s Daniel Holland, Jordan Hood (Galgorm Castle/MU) and The Island’s Kevin Le Blanc on the Ireland panel in 2017.

Massereene’s Tiarnan McLarnon was the beaten finalist at this year’s North while Rowan Lester (Hermitage) was second to Purcell at the South. Retaining the Raymond Trophy at the Home Internationals will be top of the agenda for team captain Tony Goode as Ireland bid for a fourth successive title in 2017.

“I was thrilled that we managed to win again this year because it looked like it would be a year of transition,” said Goode. “Six of last year’s squad moved into the professional ranks and we had four players making their debut at this year’s Home Internationals.”

Goode will have to plan without Jack Hume next term as he begins life in the paid ranks. Ballymena’s Dermot McElroy also joined the professional circuit during 2016.

The promotion of Mark Power to the men’s panel at the tender age of 16 comes after a season of success at home and abroad. In addition to his victories at the Irish Boys and the Peter McEvoy, Power was chosen alongside Kevin Le Blanc on the Great Britain & Ireland team for the Jacques Leglise Trophy.

In all, 11 players remain from last year’s senior panel. Next year’s Development Panel will include seven senior players. Kinsale’s John Murphy has been promoted from this year’s Boys’ Panel while Jake Whelan (Newlands) and Caolan Rafferty (Dundalk) have been recognised for their performances in 2016.