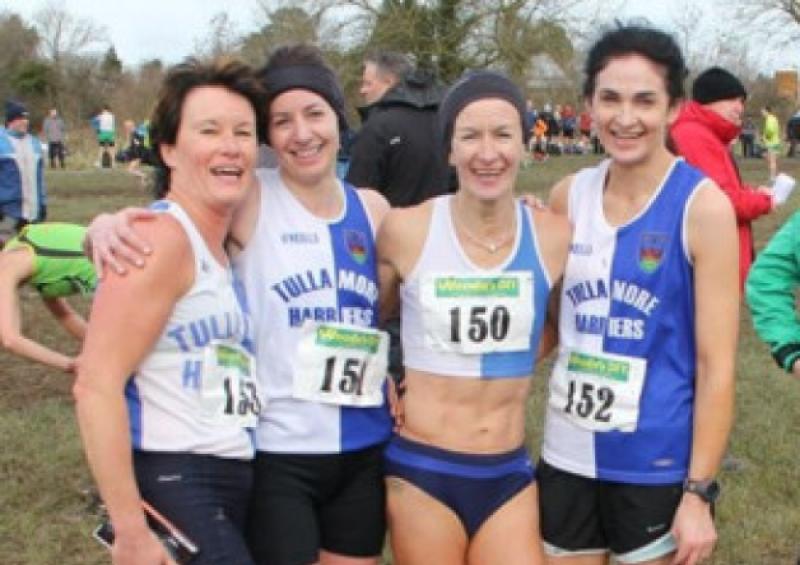 While the course was relatively flat, there was heavy mud in places and tight corners to negotiate leaving runners with little opportunity to build momentum.

The master women’s race was the first event and this was run over 4000m taking in two laps of the course. Pauline Curley was among the front runners from the start, keeping pace with the leading pack and finishing in fourth place.

Next was Michelle Mullaney in 19th place, followed by Mary Bracken (35th) and Ann Carroll (38th) who completed the team score earning them 4th place overall. Ann was 2nd o50 earning her a silver medal. Una Mullen (85th), Mags Grennan (94th) and Liz Cuskelly (97th) completed the scoring for the county team which earned the ladies 5th in the county competition. The o65 men also ran as part of that race with Tullamore’s Jim Langan winning the bronze medal in the o70s age group.

Next was the master men’s race where the crowded field led to a lot of jostling at the start as a record 239 runners took part. There were a few casualties early on including Tullamore’s Noelie Kelly who was tripped on the line and had to withdraw from the race early on.

Catch Grennan contributed to the fast early pace over the 7000m as he led out his team, eventually taking 20th place. Close behind him was Adrian Curley (25th) with Mick Murphy (57th) and Ritchie Galvin (68th) contributing the four team scores which saw them finish 6th in the club competition.

The o50 team of Christie Donegan (105th), Liam Dunne (129th), Martin Carroll (142nd) and Fra Mollen (144th) were 22nd in the overall team competition with 050 team results still to be confirmed. Also running for Tullamore were Dave Brophy who put in a fine performance to earn 128th place; Brendan Abbott (131st); Kevin Corrigan, who also made his debut at cross country was 142nd; John Donegan (175th) and John Todd (177th).

In the intermediate women’s race, which was run over 5000m, the Tullamore team where led home by Nita McLoughlin who finished 46th with Meave Larkin putting in a strong run behind her in 50th place. Rita Daly was 55th followed by Jennifer Burke (58th), Lavinia Leahy (59th) and Karen Nolan (60th) who had a fine run making her debut on the cross country team. The girls were 10th club and 5th in the county competition.

The intermediate men’s race was run over a gruelling 8000m. Dave Murray had a very good run to finish 31st in a top quality field. Mark Donegan was next home for Tullamore in 49th place with Leonard Mooney next (58th) and just behind him, his brother Conor (59th). Glenn Finlay was 61st across the line followed by Ian O’Kelly (67th). Rory Farrell was 72nd in his first cross country race and the county team was completed by John O’Connell (75th) and Eugene Mann (77th). The men’s team were 7th in the club competition and 4th county.

Pauline Curley was the second women home at the Mount Juliet 10k in Co. Kilkenny on February 15th where she ran 38.16 and was 12th overall. Also running for Tullamore Harriers in that race were Brian McManus who finished 20th in 40.01 and Basil Cronin who was 42nd in 42.58. More than 560 runners took part in the race, many of whom had originally intended to do the Half Marathon course which had to be cancelled due to flooding along the route.

Club membership for the 2014 calendar year is now overdue and needs to be paid immediately to facilitate AAI registration. Membership forms are available in the clubhouse.

Please note that use of the club’s facilities, including the tarmac track, is restricted to members of the club.

Training for adults every Tuesday and Thursday at 6.30pm and Sunday at 8.30am