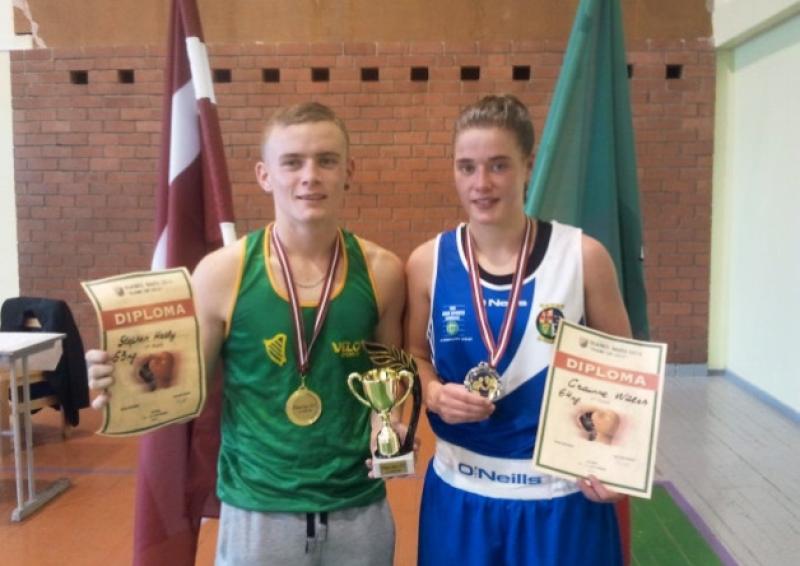 Grainne Walsh from the Spartacus Boxing Club in Tullamore and Stephen Healy from St Carthages Boxing Club in Rahan were part of a seven-member boxing delegation who left Ireland on Thursday night last to take part in the Olaine Open Boxing Championships outside the Latvian capital, Riga.

Grainne Walsh, who is a Leaving Certificate student at Killina Secondary School in Rahan, and already holds the title of Irish National Novice Champion, beat Anna Anuite from Lithuania after a tough encounter in the 64kg Semi-finals and went on to meet Anna Kinak from Latvia in the Finals. She was narrowly defeated 2-1 on a split decision after a very tough encounter and was awarded a Silver Medal.

Meanwhile, the other Offaly boxer to travel to Latvia, Stephen Healy, who is a 5th year student in Killina Secondary School, got a bye into the 63kg Final where he defeated Maksimylian Kramarz from Poland on a unanimous decision and brought home a Gold Medal.

Stephen, who is son of Helena and Gordon Healy from the Island in Ballycumber, has been boxing for almost four years and he already holds 3 Offaly titles, 3 Leinster titles and was a Silver medallist at an 8-nation boxing tournament in Poland before he won Gold in Latvia.

Grainne Walsh, who is daughter of Gerry and Geraldine Walsh, Clara Road in Tullamore has been boxing for just over a year. She won the National Novice Championship earlier this year and also took part in the All-Ireland U-18 Championships in the National Stadium in Dublin. She is also an accomplished soccer player and is currently a member of the Dublin-based Shamrock Rovers ladies team.

Stephen Healy will compete for the Michael Andrews title this weekend in the National Stadium, while Grainne Walsh is due to compete in the U/22 All-Ireland Championships at the same venue next month.