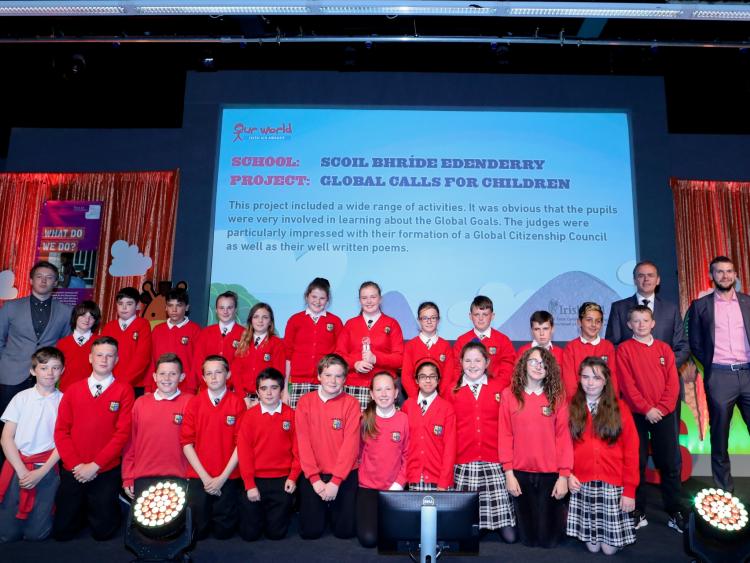 Over 1,000 primary schools throughout Ireland participated in the Our World Irish Aid Awards 2016 by creating projects about the lives of children in developing countries, and the progress achieved by Ireland and other countries in the global effort to fight poverty. The ‘One World, One Future’ theme of the 2016 awards asked pupils to imagine how they would like their world to look in 2030, and to learn about the new United Nations Sustainable Development Goals which seek to address the root causes of poverty and environmental damage worldwide.

Speaking at the National Finals, Minister of State for the Diaspora and Overseas Development Aid Joe McHugh T.D. said: “I wholeheartedly congratulate Scoil Bhríde Edenderry, and indeed all of the primary school pupils who took part in the Our World Irish Aid Awards 2016. These awards give pupils from all over Ireland a fantastic opportunity to gain insight into the lives of children in developing countries, and learn about the challenges they face every day. It’s clear from all of the projects here today that pupils are care deeply about the issues of development and the need to ensure equality on our planet.

“It is encouraging to see such a high level of interest in global development among primary school pupils in Ireland, and this reflects the importance that teachers and parents place on ensuring that children in Ireland understand their role in making the world a fairer place. It is fantastic to see these young pupils embracing their roles as active global citizens, and working hard to highlight the Sustainable Development Goals and the work of Irish Aid in their schools and wider communities. These primary school pupils have an important role to play in the global effort to create a better fairer and more sustainable world over the next 15 years.”