Day of disappointment for Offaly U-16 camogie teams 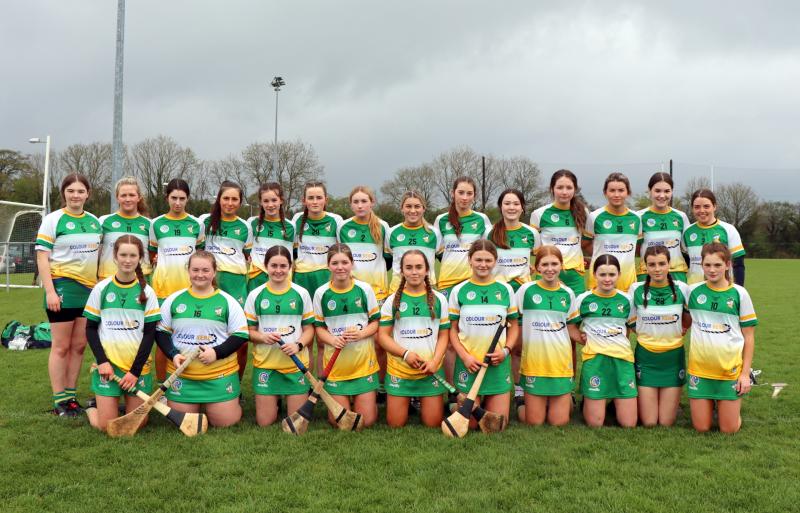 The Offaly team that played in the Leinster Under 16A Shield Final on Sunday. (Photo by John Gavin).

IT was a day of disappointment for the two Offaly Under 16 teams in the Leinster Camogie Finals on Sunday which were held in the Carlow Centre of Excellence in Fenagh.

First up, the Offaly B team played Meath in the Under 16 C Cup and having beaten Meath in the earlier rounds of the competition, Offaly would have felt quite confident going into the match.  Just as the match began, the forecasted rain began to fall which needless to say didn't help either team.  Meath opened the scoring with a goal after three minutes but the Offaly girls kept working and were rewarded for their efforts with points from Gillian Loughnane and Aoife Stokes.

Luck was not on Offaly's side throughout the day and the first occurrence of this happened next when a Meath ball in was saved by Rachel Ryan in the Offaly goal but as the ball spilled from her grasp it was swept to the net by the Meath attack.  The Royal girls followed up with a point soon after before a Niamh Sheehy free left the half time score reading 2-1 to 0-3.

When play resumed a Meath point extended their lead.  Offaly's next attack saw Niamh Sheehy soloing through the heart of the Meath defence and while in full flow she was accidentally tripped as she bore down on goal.  The resulting free was tapped over but no doubt Offaly will have wondered what might have been if Sheehy was able to continue her run.  The team's traded frees before a Meath goal killed off the Offaly challenge.  The Faithful girls emptied both their proverbial tanks and the bench as they tried to find the goals they craved but the Meath defence stood strong and while Offaly did tap over a free it proved to be scant consolation for them as Meath were deserved winners on the day.

While Offaly may have been optimistic of their chances in the C Cup Final, they would have gone into the A Shield Final hoping history would not repeat itself given that Wexford had beaten them heavily in the earlier rounds.  Cruelly, the rain that had stopped came back heavily just as the match started and made conditions horrible for both teams. An early Roisin Kinsella pointed free was cancelled out by Wexford before the Slaneysiders were awarded a penalty.  An excellent save by Alannah Dooley in the Offaly goals brought great delight but that was short lived as two quick fire goals left Offaly fearing the worst.  But they dug in and fought for every ball and Wexford would only register another point in the first half as Offaly went on to dominate the scoring.  Roisin Kinsella converted a free before Allie Butler pointed.  Fianait Dooley hit a brace of points, the first one coming from some excellent build up by the Offaly girls before Kinsella hit over two placed balls to leave them trailing by just one point at the break.  There can be no doubt that the Offaly backroom team will have been delighted with the effort, work rate and all round play by their team as they spoke at half time.

Roisin Kinsella opened the scoring in the second half when she hit over but now it was Wexford's turn to dominate the scoring as they hit four points without reply.  It could have been worse were it not for an excellent save from Sophie James, who played in goals for the second half, when she deflected a rifled shot over the bar.  With time running out Kinsella converted a free and as Offaly pressed for a goal the Wexford defence stood strong and they went on to win on a scoreline of 2-6 to 0-9.

While no doubt they will have been disappointed to have nothing to show for their efforts on the day, the Offaly girls will now regroup and look forward to the Under 16 All Ireland Championship.