Offaly side through to Leinster Final after dramatic finish 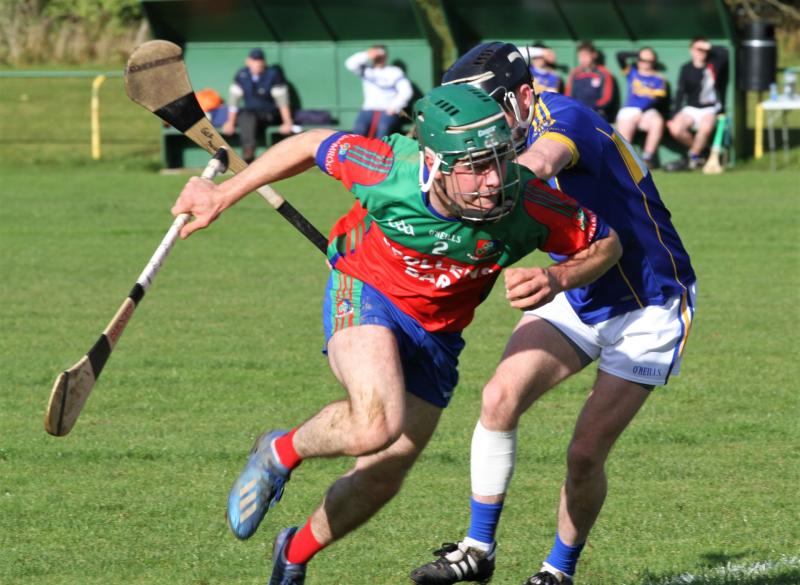 Shamrocks are through to the Leinster Junior Hurling Final after a one-point win over Maynooth in Hawkfield on Saturday afternoon. It was a close affair throughout and after going four points up, Maynooth fought back to get to within one point in injury time. They had a chance to win it but David Qualter’s attempt sailed agonisingly wide as the men from Offaly held out to advance to a showdown with Mooncoin of Kilkenny in early 2022.

There was no real wind in Hawkfield and it was an entertaining first half. It was a hard-hitting, tense affair with a prize of a Leinster final at stake, both sides left no stone unturned.

Man of the match Nigel Dunne opened proceedings for Shamrocks but Maynooth were level soon after through David Qualter.

David Molloy and Cathal McCabe traded scores for their sides, but underfoot conditions were difficult with both sides struggling to keep possession.

Shamrocks grabbed their first goal of the game just before the water break. A long ball was hit in on top of full forward Shane O’Toole Greene. He put his hand out to catch it and remarkably it bounced off his hand, directing it away from goalkeeper Sean Bean and it was eventually bundled over the line.

Ciaran Flanagan settled the Maynooth ship after the water break and it reduced the lead to four before Dunne responded with a free of his own to restore the five-point lead.

28 minutes in, Shamrocks raised their green flag for the second time. Darragh Minnock brilliantly found Shane O’Toole Greene inside and he turned and ran direct for the Maynooth goal. He slipped it to his brother David who made no mistake in burying the ball to the net.

The Maynooth response was almost as impressive and quick as their goal. Cathal McCabe who was excellent throughout picked the ball on the run and he went straight for goal before slotting past a helpless Niall Darcy in goal. Maynooth’s Ciaran Flanagan pointed just before the break and it left it a five-point game at the half time break.

Upon the resumption of play, Qualter pointed from a placed ball as Maynooth looked to gather some early momentum in the second half. Shane O’Toole Greene briefly reduced the Maynooth surge but 38 minutes in, they were given a lifeline when Qualter powered through the Shamrocks defence and his powerful shot flew by Darcy again.

They almost had a second goal immediately after when Adam Jordan had the goal at his mercy and just as he wound back his hurl, Sean Cantwell terrifically hooked him to deny it.

When Nigel Dunne shot two brilliant long range frees to restore a four point lead either side of the water break, it looked as if it had put Maynooth comeback to bed.

However, to their credit, the Kildare champions rallied. Qualter hit over two frees in the fourth quarter and a McCabe point reduced the Shamrocks lead to just one point in injury time.

Qualter had a brilliant chance to level it right at the death when he raced out in front of Cantwell. He turned and his shot from a tight angle sailed agonisingly wide, much to the relief of the Shamrocks crowd who had travelled.

Qualter’s chance proved to be the final chance of the game as referee Derek Ryan blew his full time whistle, ensuring Jimmy Conway’s men progressed to a Leinster Junior Hurling Final, their second in seven years.