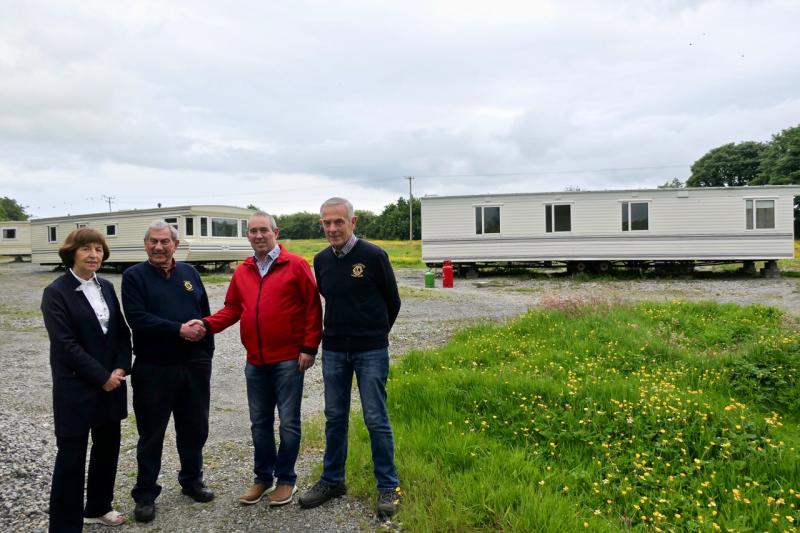 THE very dynamic Geashill Ukraine Committee through their own initiative and fundraising efforts provided three mobile homes for Ukrainian families to live in their award winning tidiest village.

Their efforts were supported by Tullamore Lions Club who donated €2,000, given by local business people and personal donations.

Alan Gethings explained that the idea was first mooted when a number of local people met in the local hall just a few days after the Russian army invaded Ukraine and pictures of families running for their lives began to appear on our television screens.

“What else could we have done?” said Mr Gethings. “We were offered and looked around at a number of unused houses in the area but found it would be expensive to refurbish them to acceptable standards.

“When approached, Bernie Sullivan Brady, the owner of the village caravan park, was more than delighted to see a revival of the park and to lend her support to the humanitarian cause.

Offaly gets €25,000 for water projects including tower exhibition

“We decided on three mobile homes, in the caravan park, to provide opportunities for Ukraine families to integrate into our community and keep the cohesion of our village”.

Each of the homes has three bedrooms in addition to generous living space. Each home has running water and electricity.

Before proceeding with their plans, the committee worked with the Irish Red Cross and Offaly County Council in outlining their facilities and what they had on offer for three Ukraine families.

To fund their project the committee set up a bank account and organised a number of events including a ceili, sale of work and a card drive.

“The project was made possible by the generosity of local business people, personal donations from local residents and those who organised the events,” explained Alan.

The homes are now ready for occupation as soon as tenancies have been allocated and notified to the committee.

President of Tullamore Lions Club, Paul Cullen, said the club were delighted to be able to support this novel, cost effective and much needed facility. “The money donated has been wisely invested,” said Mr Cullen.