Wildlife Watch: Can you find this tiger lurking in your garden?

With the Irish Peatland Conservation Council 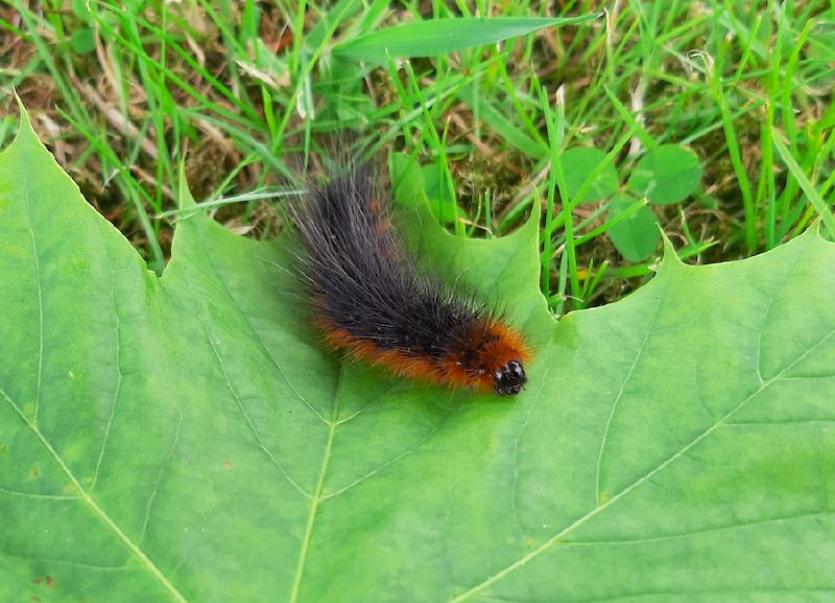 Did you know that there are approximately 1,350 species of moth in Ireland?

With 1,350 moths, there are also 1,350 moth caterpillars, so forgive me if I have identified this week’s caterpillar incorrectly.

In the wildlife gardens of the Bog of Allen Nature Centre, a volunteer found this week’s species. It is what I believe to be the caterpillar of the garden tiger moth (bolb leamhan tíogair as Gaeilge). This is a native species which, as its name suggests, is a typical garden visitor, but can also be found in damp grassland, open woodland and coastal areas.

The garden tiger moth is relatively common in Ireland and its populations are not considered threatened.

The body of the caterpillar is covered in hairs. These hairs are believed to be used as a defence against predation by the moth caterpillar. Its appearance has also resulted in the garden tiger moth caterpillat being sometimes referred to as the ‘woolly bear’!

The garden tiger moth has orange hairs at the side of the body with longer blacker hairs that turn paler as the caterpillar ages along its length.

Over the next few weeks the caterpillar will pupate and the adult moth will emerge throughout June.

The adult garden tiger moth can be identified by its hind wings that are orange with blue-black spots, and forewings which are black with white spots.

The adults will mate and lay eggs on the food plant of the caterpillars. These eggs will hatch in August, feed and then overwinter until the following spring where they will begin to feed again before pupating with the adults again emerging in June.

Will you find the garden tiger moth in your garden this week? If not you may at least come across one of the other 1,349 species of moth in Ireland!

If you would like help identifying local wildlife or indeed to share your images of local wildlife encountered to be used in a future Wildlife Watch, contact me on 045 860133 or bogs@ipcc.ie.