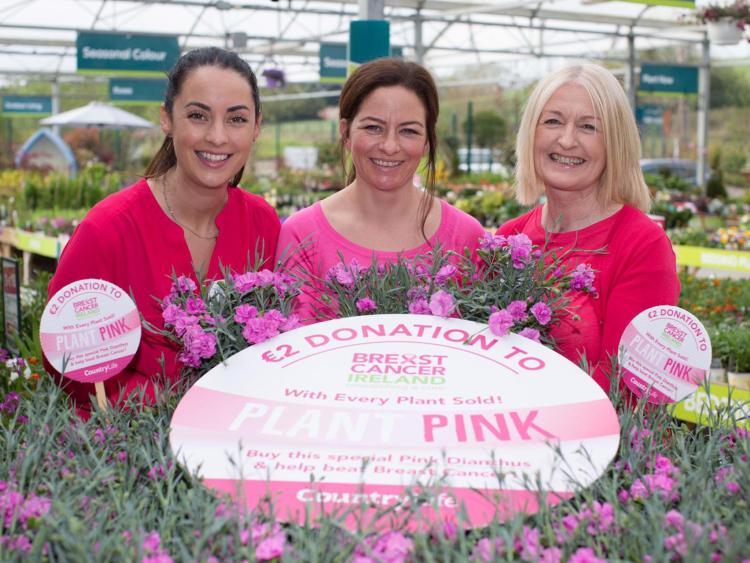 Gardeners and plant-lovers are being urged to ‘Plant Pink’ over the coming months in an all-out effort to raise awareness of and needed funds for Breast Cancer Ireland.

Glanbia CountryLife has launched its first ever Plant Pink campaign in all 14 of its award-winning garden centres across Leinster and Munster. In Offaly, CountryLife has a centre in Tullamore. It wants everyone to buy a special Pink Dianthus, to become more breast cancer aware and to support the fundraising drive.

CountryLife will donate €2 to Breast Cancer Ireland for every limited edition Pink Dianthus sold. Members of the public can also support the initiative by logging on to the store’s website, www.countrylife.ie.

The sun-loving plant, also known as Tickled Pink, was chosen because of its beauty, its unmistakable perfume, its resilience and its sun-loving characteristics, Glanbia CountryLife’s Jess Kelly explained. "The limited edition and specially chosen Pink Dianthus is specially grown in Limerick in a biologically friendly way with virtually no chemical pest control methods at the family-run Young Nurseries," she added.

“Pink Dianthus is a fabulous flowering plant. It is hardy. It is vivacious. It is a survivor. We’ve organised special branding and awareness drives in all 14 of our garden centres to make our loyal customers aware of this fund-raising and awareness campaign."

“We’re a proud supporter of Breast Cancer Ireland and we’re hoping that this limited edition Pink Dianthus will be our top seller as the busy gardening season gets underway. It’s also a fabulous pollinator and butterflies in particular love it,” Ms Kelly revealed."

The Glanbia group has close ties with Breast Cancer Ireland. Last year alone, Glanbia employees raised over €100,000 for the charity through their Two Peaks Challenge, the Glanbia 300 cycle and the Glanbia Pink Bales campaign. The global company is also the title sponsor of the Great Pink Run which attracted 8,000 entries last year.

Breast Cancer Ireland funds the recruitment of specialist Breast Cancer Research Nurses, whose role is to collect and collate the vital patient tissue and serum samples into one large centralised resource which can be accessed by clinicians and scientists nationwide, thereby helping to build patient profiles, speed up discovery times and ultimately affect more positive treatment outcomes.

Aisling Hurley, CEO, Breast Cancer Ireland said: “Mortality rates from breast cancer are predicted to fall across Europe in 2019 due to improvements in screening, early diagnosis and treatment and it is initiatives such as Glanbia CountryLife’s “Plant Pink” that allow Breast Cancer Ireland to continue to fund pioneering research and awareness and transform the landscape of breast cancer in this country."

“Our relationship with Glanbia, which began over five years ago, has grown and developed and we are so appreciative of the tireless efforts of employees, suppliers and the general public in supporting their worthy initiatives. We encourage our supporters throughout Ireland to visit one of the fourteen garden centres and pick up one of the Pink Dianthus packs over the coming weeks and we wish them well in their gardening endeavours,” she said.

Supporters of the campaign can also support Breast Cancer Ireland directly by logging on to www.breastcancerireland.com.

CountryLife Garden Centres are a network of 14 award-winning garden centres from Glanbia Ireland, Ireland’s #1 farm and rural retailer with 53 outlets. CountryLife is Ireland’s second biggest garden centre chain and includes a network of dedicated plant centres across Leinster and Munster and an online store at www.countrylife.ie with expert horticulturists in every store. They are stockists of a wide and varied range of quality plants, 90% of which are grown in Ireland.