Huge response to live music on the Grand Canal in Offaly 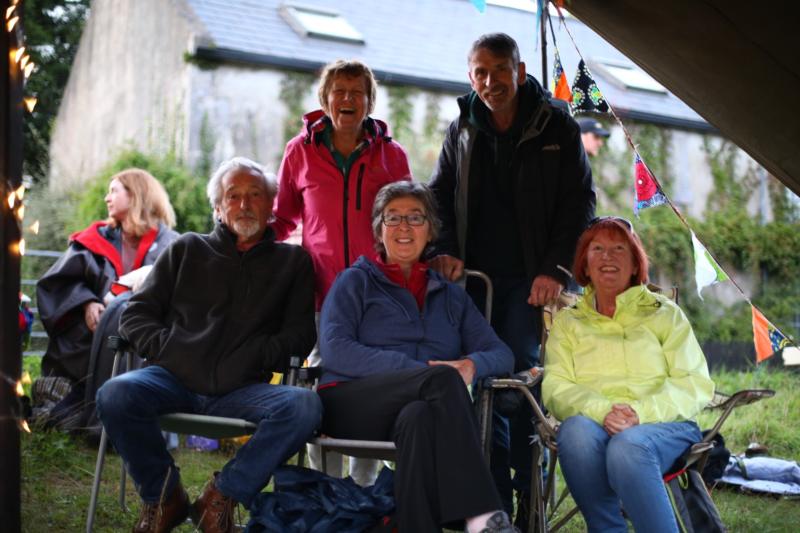 All Boats Rise is a month-long voyage by musicians Ye Vagabonds, along Ireland's inland waterways, most recently on the Grand Canal.

The show is driven by two remarkable musicians, an Irish folk music duo consisting of Carlow brothers Diarmuid and Brían Mac Gloinn, known together as Ye Vagabonds. and supported by the Arts Council of Ireland and Waterways Ireland. Diarmuid and Brían navigate the many locks through Offaly, Westmeath and beyond, mooring at a new location each night, meeting fellow musicians and artist friends to perform to a small, intimate audience of people who have pre-registered for the event’s free tickets.

Belmont, Pullough and Ballycommon were among the Offaly stops on the Grand Canal for Ye Vagabonds. In their ‘wee gig’ at Belmont, they performed their folk ballads from under the old grain store dock, the picturesque venue steeped in Grand Canal history. A small gathering of people enjoyed the return of live music from the banks of the canal, watching Ye Vagabonds playing from the roof of their barge, Dunrally, across the water.

On Sunday night last, the same day that Offaly became  All-Ireland Under 20  Football  Champions, Diarmuid, Brían and crew moored in Ballycommon where they were joined by spoken word poet,  American Appalachian-born, Dublin-based, Erin Fornhoff, also arriving by barge, who gave powerful and emotive recitals of her poetry to a captivated audience.

"We  have joined a wonderful floating community," remarked Diarmuid during their performance, paying reference to the growing  community of people that have made their home on the canals, living on their barges, against a backdrop of growing housing issues in the larger cities and towns, but also for the freedom and adventure that this lifestyle allows. The Dunrally moored beside 107B, dressed with soft night lights, a barge believed to have been built in Ringsend around 1930, but now restored to hold exhibitions on the canal.

Under the management of Islander Music, the tour is travelling towards Digby Bridge and Rathangan next. The Hibernacle production crew, consisting of talented Birr men, Peter Kelly and Oisín Clarke, together with the great Will Softly in Ballycommon, ensured that the audience had the best sound experience, while music documentarian,  Myles O'Reilly, captured the essence of the night for what you hope will be a documentary we will all see on our screens in the future. All Boats  Rise events remind attendees that the point of this tour is to respect our beautiful country and to not be wasteful, so no rubbish is left in the area.

Attendees remarked that Offaly is flourishing as a centre for culture and entertainment, of ingenuity and resourcefulness, and thanked Ye Vagabonds for making this tour a reality. Our mixed landscape of hills, bogs and waterways have grown as the backdrop for a new way to enjoy live entertainment, activities and share new experiences together. With events such as John Lee’s Rising21, VivaPalooza, the ongoing Museum of Everyone and the upcoming Meet Me in The Garden music shows in Birr, the Offaly music and arts culture calendar has a full line up for an audience hungry for live entertainment.

All Boats Rise will continue its journey until early September. Ye Vagabonds’ journey can be watched daily on their social channels. Visit  www.yevagabonds.com  for more details.