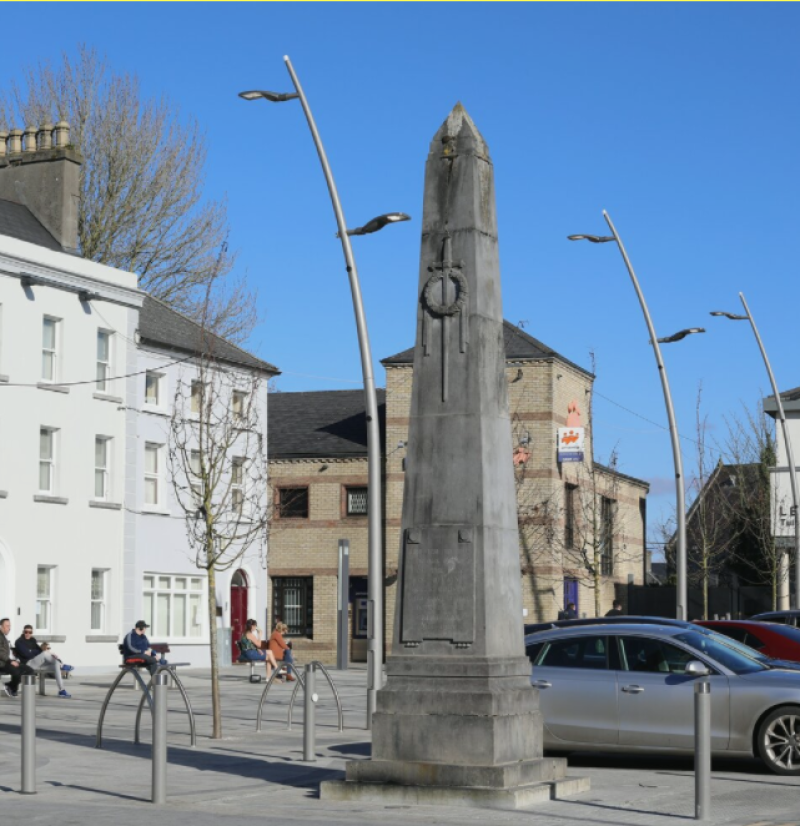 A decision by An Bord Pleanala in relation to the war memorial in O'Connor Square in Tullamore has left Offaly County Council in an embarrassing position.

In January of this year, former town planner Fergal McCabe asked Offaly County Council whether the alteration of a raised stone kerbing and the removal of the gravel finish surrounding the base of the war memorial constitutes a development which is exempted from the usual planning procedures.

During the recent works carried out in O'Connor Square and under the original Part 8 process (public consultation with submissions invited) it was proposed to relocate the war memorial within the square in order to accommodate revised parking arrangements as part of the new layout. However, following objections from national and local bodies, it was directed that the war memorial be retained in its central position within the square.

In order to attain the requisite number of car parking spaces within the square and to allow for the safe passage of pedestrians, wheelchairs and buggies, it was decided that in carrying out the works, the raised kerb area surrounding the plinth and the gravel infill around the war memorial would be dug up inverted and buried flush with ground level and it was decided to extend the new paving up to the base of the obelisk.

The question posed by Mr McCabe to the local planning authority was whether or not this was development or exempted development.

The Planning Authority noted that there was a procedural omission in the public notices in not referring to the proposed alterations to the war memorial. On foot of this, a complaint was made to the Office of the Planning Regulator (OPR). The OPR determined that the procedures adopted by Offaly County Council was a once-off error and was not systematic in nature and the complaint was not upheld.

Mr McCabe then referred the matter to An Bord Pleanala who have concluded that the alteration of the raised stone kerbing surrounding the base of the war memorial materially affects the character of the protected structure in question and an element of the structure (the area where wreaths were laid) which contributes to its special architectural, historical, archaeological, artistic, cultural, scientific, social or technical interest and was therefore not deemed to be exempted development in accordance with various sections of the Planning and Development Act.

The Board decided that the alterations constitute development that is not exempted development.

The council will now be left in a position to either reinstate the kerbing or come up with another solution that would be acceptable to all parties.

The war memorial comprises a stone obelisk which tapers to a height of c.4.5 metres. The memorial commemorates those in the local area who lost their lives during World War I and World War II.

Window to act on climate change is closing - Offaly minister