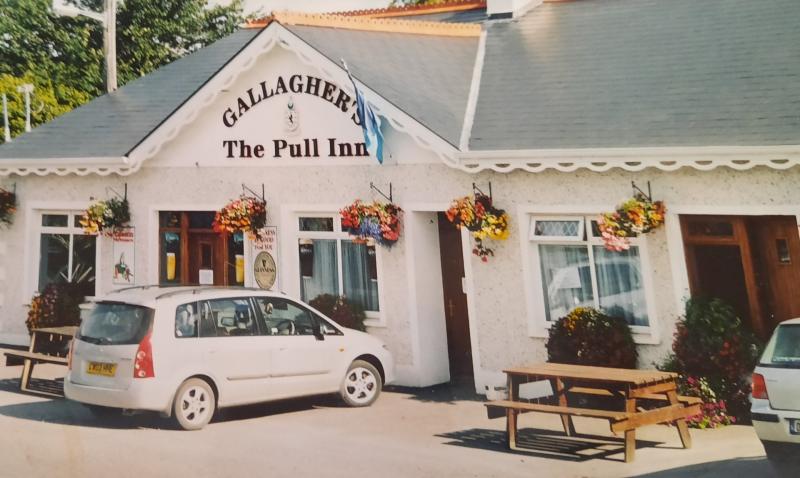 FIVE decades of successful trading will be celebrated by the Gallagher family of “The Pull Inn” on Saturday next, July 3.

The popular Pullough hostelry was opened by Joe Gallagher on July 3, 1971 and he and his wife, Josie, children and grandchildren have conducted a thriving trade over the ensuing half century.

“The Pull Inn” is at the heart of the community in Pullough and life in the pretty canalside village revolves around the welcoming premises.

The past 16 months have been difficult for the Gallaghers due to coronavirus restrictions but they are looking forward to reopening in the coming weeks and hosting a celebration to mark the pub's golden jubilee.

Joe Gallagher hails from Kinlough on the Leitrim/ Donegal border and originally came to the Faithful county to attend secondary school at St Anthony's College in Clara.

He left the Franciscans in May 1971 at the age of 25. “I had no intention of buying a pub at the time as I had secured a job as a representative for a pharmaceutical company. But I was looking for a house to live in and the auctioneer Mick Casey persuaded me to buy a pub.”

“We looked at a pub in Geashill but I immediately fell in love with the pub in Pullough when I viewed it,” Joe told the Tribune this week.

“The Pull Inn” took off 'like a bomb' from day one meaning that I never took up the job with the pharmaceutical firm,” outlined Joe.

He had no experience as a publican and was trained in on how to pull a pint by Marie McLoughlin, who was a barmaid there. He was also ably assisted by veteran barman Mick English.

The pub opened to the public on Saturday, July 3 and the first customer in was Mixer Tierney, whose daughter Moll was getting married to Billy Wynne in the church that morning.

“Mixer handed me back his pint of Guinness with the words 'fill it up fully' and from there on we never looked back,” recalled Joe.

To purchase the premises Joe borrowed £1,000 from each of his brothers in England and another £1,000 from his mother as well as getting a loan for £12,500 from the Hibernian Bank in Tullamore.

Joe immediately started renovating the premises and during the building work made regular trips for materials to the old co-op in Cloghan.

“Naturally I'd drop into Kilcommons pub for a pint in Cloghan and there I met my wife to be Josie (nee Kilclyne) who was working there as a barmaid,” he remembered. The happy couple married a few years later and now have eight children Barbara, Olive, Fergal, Cormac, Aoife, Joy, Josephine and Joseph.

Their daughter Joy works full time in “The Pull Inn” and she is ably assisted by her three boys Dylan, Billy and Tim and on a part-time basis by her brother, Joseph..

The legendary old folks parties commenced at “The Pull Inn” in 1971, organised initially by Joe and his late mother, Barbara, and they were the highlight of the social calendar in Pullough for many decades afterwards.

The Gallaghers also hosted the annual “Pull Inn Music Festival” which at eight days was the longest event of its kind in the country.

Some of the top names in show business performed at the event, including the Dubliners, the Wolfe Tones, Declan Nerney and Brush Shiels, and punters attended from all over the Midlands. For many the highlight of the festival was the annual karaoke competition while there was also an afternoon devoted to children's activities and sports competitions.

“The Pull Inn” is also deeply associated with the local Erin Rovers GAA Club and has been the sponsor for many years.

“Our success would not have been possible without the loyal support of our customers down through the years for which we are eternally grateful,” outlined Joe.

He said that he had fond recollections of all the old customers who had passed away during the past 50 years.

“We cannot celebrate out 50th birthday at this present time due to Covid but we hope to have a proper celebration with music sometime later in the year,” he outlined.

Joe is looking forward to the future with confidence and said prospects were bright for Pullough with the opening of the Grand Canal Greenway.

The village is attracting more and more walkers and cyclists and it is hoped there will also be an increase in the number of boats using the Grand Canal.

Joe plans to open a camper van facility and a camping site while plans are also in the pipeline to start serving food at “The Pull Inn”.

As well as “The Pull Inn”, Joe owned and operated a number of other public houses around the Midlands including the “Manor” and the “Phoenix Arms” in Tullamore, the “Cloghan Inn”, “Joe's Bar” and “The Keg” in Athlone, the “Ennell Bar” and the “Cloghan Inn” in Mullingar and the “Arch Bar” in Ballinagore.

All at “The Pull Inn” are delighted to celebrate this landmark birthday and they look forward to another five decades of successful trading in the vibrant, rural community of Pullough.