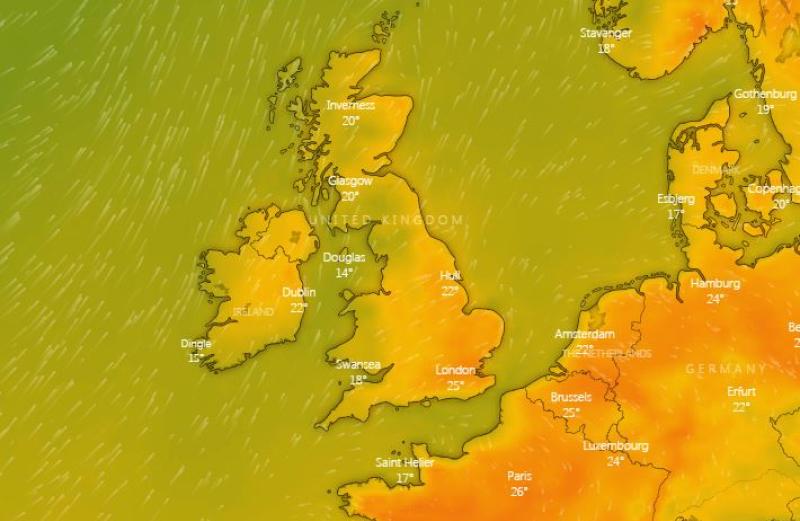 Met Eireann is forecasting that temperatures will reach as high as 23 degrees this week. The weather forecast for the coming days from Met Eireann is for the weather to continue mild with rain at times but generally dry for eastern areas. Indications are for warm and broadly settled conditions for next weekend.

The weather forecast for Tuesday from Met Eireann is for it to be mostly cloudy to start with patchy light rain, drizzle and mist along southern coasts. Hazy spells of sunshine will break through as the days goes on, but it will remain largely cloudy in western and southern coastal counties with outbreaks of rain at times. Highest temperatures of 15 to 20 degrees, coolest in southern coastal areas in a moderate southerly breeze.

Tuesday night will be a rather cloudy night with patchy rain and drizzle turning heavy and persistent at times, particularly in the north of the country. Lowest temperatures of 13 or 14 degrees with light to moderate southerly winds.

The weather forecast for Wednesday from Met Eireann is for rain and drizzle to turn patchy through the day with sunshine gradually breaking through. Cloudier conditions will persist across west and northwest counties, with lingering mist and drizzle at the coast. Warm and humid, with temperatures of 17 to 22 degrees, a little cooler along western and southern coasts, in moderate southerly breezes.

Wednesday night will be cloudy with rain around the south and west coasts, it will be largely dry elsewhere. Another humid and rather warm night with lowest temperatures of 12 to 15 degrees, in moderate southerly breezes.

According to the latest Met Eireann weather forecast, Thursday will be the warmest day of the week. It will be warm, humid and breezy with scattered outbreaks of rain and drizzle. There will be drier weather across the eastern half of the country with the sun breaking through at times. Afternoon temperatures of 17 to 23 degrees, the higher values in the east and northeast, in a moderate to fresh south to southwest breeze. Atlantic counties will see further rain and drizzle after dark, with the rest of the country staying largely dry. Warm and humid at night.

A mostly cloudy start on Friday with patchy rain and drizzle fizzling out through the afternoon and sunny spells developing. Feeling a little fresher with highest temperatures ranging from 15 degrees at coasts of the west to 20 or 21 degrees in the southeast. Winds will be light to moderate westerly becoming variable in direction later.

Met Eireann says that current indications suggest warm weather for next weekend with the best of the sunshine in the east and south.