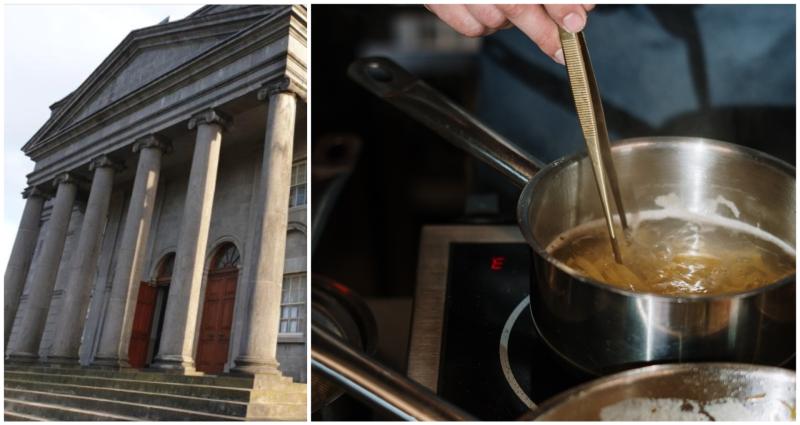 A 54-year-old Offaly man was convicted of assaulting another man with a saucepan at last Monday's sitting of Tullamore District Court.

Michael Carroll, 54, Clonlee, Kinnitty had denied striking Percy Moyles at Clonee on September 9, 2020, when he came before Judge Bernadette Owens.

In his evidence, the injured party Mr Moyles said that on the above date he had received a call to say some of his sheep were on a public road. He went to investigate and there were indeed sheep loose. He said he put them into another field but after counting them he knew he was short.

Mr Moyles said he drove down a laneway and into a disused yard and when he was coming out, the defendant Michael Carroll drove in front of him and "cut him off" with his jeep.

Percy Moyles said he had both windows down on his own jeep and there was a saucepan on the passenger seat which he said he used to bring food for his dog.

He said Michael Carroll began shouting at him, he then reached in through the window, grabbed the saucepan, and "whacked him". He said he struck him a second time. "I thought my arm was broken," he said.

Mr Moyles said Michael Carroll then opened the passenger door and struck him five more times with the saucepan. He said he backed into a corner of his vehicle to get away from Michael Carroll and he must have accidentally pushed down the lock on the door, "I couldn't understand why I couldn't get out," he said.

He said he was shocked and phoned the gardai. He said the gardai called to him at around 4pm that afternoon. "I was quite anxious. I was quite fearful," he said.

Sgt James O'Sullivan said there were photographs which were taken by a friend of Mr Moyles.

However, solicitor for the defendant, Donal Farrelly, said he was not accepting the photographs as there was no proof they were taken by photographer Martin McCarthy as he had since passed away.

In her evidence, Garda Ann McDonnell, said she took a statement from Mr Moyles along with six photographs of his injuries. She also had a medical report on Mr Moyles from Wilmer Medical Centre which she handed to the judge.

She said she arrested Mr Carroll and charged him with section 3 of the non-fatal offences against the person act.

Donal Farrelly solicitor put it to Mr Moyles that there was a history between him and Mr Carroll.

Percy Moyles said the defendant had rented his land some years earlier. It had gone into insolvency and Mr Carroll owed him €26,000. But he added that this had nothing to do with this particular incident.

Mr Farrelly also questioned Mr Moyles about the saucepan and added that in his statement he said Michael Carroll had thrown it at him and he had said this almost as an afterthought.

Mr Moyles insisted that Michael Carroll did throw the saucepan at him on two occasions.

Mr Farrelly also put it to him that he had shot Michael Carroll's dog. Percy Moyles said he did shoot the dog as it had been threatening his sheep. Mr Farrelly then put it to him that he had also threatened Mr Carroll's son. Percy Moyles denied this saying Michael Carroll's son had come into his field after he shot the dog and said "I suppose you are going to kill me too."

Mr Farrelly then asked Percy Moyles why he had left it four days before attending a doctor. He also asked why he hadn't shown his injuries to the gardai. "I may not have shown them because the bruises didn't show for a few days," he answered.

Judge Owens said she didn't think 4 days was an unreasonable amount of time before attending the doctor.

Mr Carroll denied hitting Percy Moyles with a saucepan. "I'm telling you categorically I didn't hit him. I didn't grab anything," he said. He went on to say there was "bad blood" between them.

Detective Sgt Fergus Hogan drew a sketch of where Michael Carroll claimed he got caught when Mr Moyles reversed his vehicle. He said a triangle had formed between the open door of Percy Moyle's jeep, a pillar and a gate.

Judge Owens asked Mr Carroll had he reported Mr Moyles for driving at him. He said he didn't.

In his summation, solicitor Donal Farrelly told Judge Owens that all she had before her was an allegation. He said the gardai didn't see the injuries on Mr Moyles and it had taken him 4 days before attending a doctor. He said the sheep were found a few miles away. He said Mr Carroll had gone to the gardai of his own volition and there was a history between the two men.

He said Mr Carroll was a 54-year-old married man with four children who was never in trouble before.

In reaching her decision, Judge Owens said she had the medical report on Mr Moyles from the doctor. She said if she was to accept Mr Farrelly's argument it would mean Mr Moyles had inflicted the injuries on himself.

Having heard all the facts she said she had to take into account that there was a history between the two men and where the assault had happened. She noted Mr Carroll had no previous convictions.

She asked if Mr Moyles wanted to give a victim impact statement, but he declined.

She said she was convicting Mr Carroll and directed him to pay €500 to the Saint Vincent de Paul. She said if this was done she would apply the probation act. If not she would impose a fine of €500 on Mr Carroll.

She told Mr Farrelly if his client wished to appeal she would fix recognisance on Mr Carroll's own bond of €250.