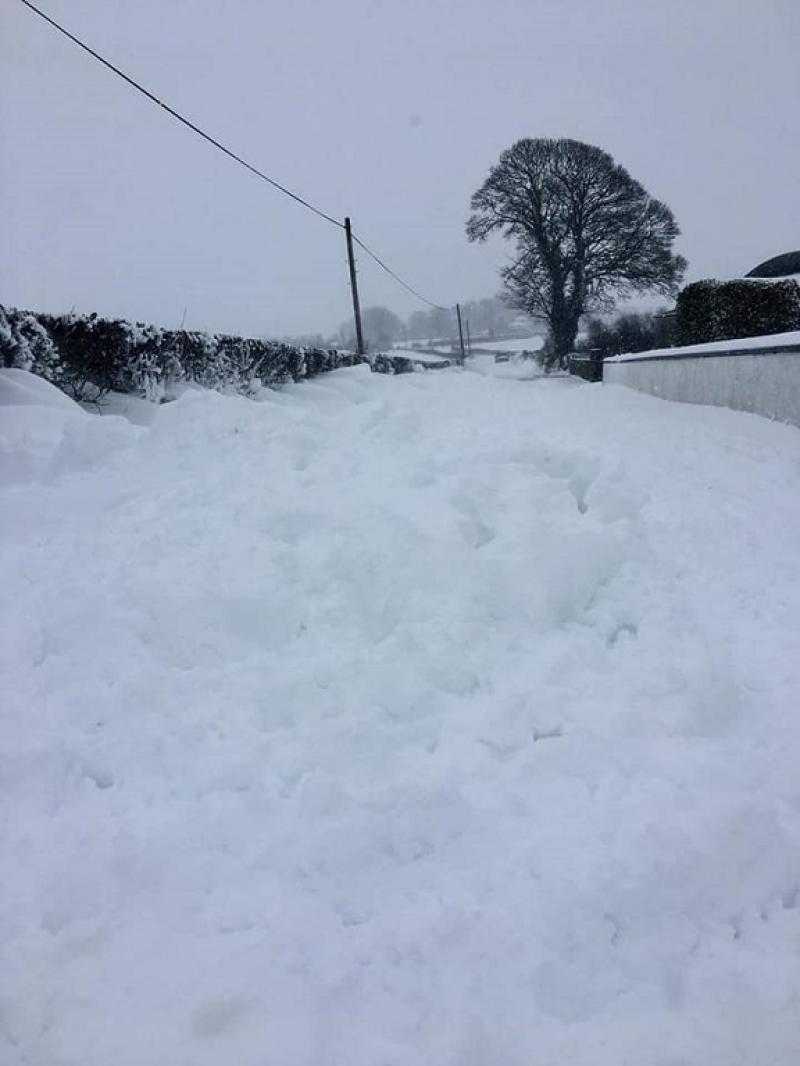 The entire country is on alert with Met Eireann warning that snow and ice is on the way tonight.

Met Éireann has warned of treacherous conditions in a Status Yellow snow-ice weather warning for the entire country.

The forecaster is expecting hard frost with temperatures dipping to -4 degrees Celsius to be followed by snow that will sweep across the country.

The Status Yellow low temperature/ice warning warns that it will get very cold on Wednesday night into Thursday morning. Temperatures will drop to -3 to -4 degrees.

This alert is valid from 8 pm on Wednesday to 10 am on Thursday.

The Status Yellow snow/ice alert warns of 'treacherous conditions'. It says some accumulations are possible. It is valid from 11 pm on Wednesday to 11 am on Thursday.

In its forecast Met Éireann says the widespread frost will cause icy stretches and some freezing fog. It adds that a band of rain, sleet and snow will slowly sink down from the northwest with some snow accumulations.

While Thursday will be bright after the snow clears, Met Éireann is advising of another 'raw day' as the cold snap persists. Friday night will be bitterly cold but there are signs temperatures will begin to rise over the weekend. MORE DETAILS BELOW TWEETS.

Very cold with minima widely falling to -3 or -4 degrees Celsius.

Snow and ice will lead to treacherous conditions.
Some accumulations possible.

NATIONAL FORECAST issued at 8.50 am on January 6.

WEDNESDAY: Very cold today, with lingering frost and ice. Dry, bright and calm in many areas, however some wintry showers will affect the east of Leinster, becoming mainly confined to coast. Later this evening, outbreaks of rain, sleet and some snow will begin to move into the north and west. Highest temperatures of just 0 to 4 degrees Celsius.

A widespread frost will set in again at night with icy stretches and some freezing fog. A band of rain, sleet and snow will slowly sink down from the northwest with some snow accumulations. Lowest temperatures of -4 to +1 degrees Celsius, coldest across Leinster, in mostly light variable breezes.

THURSDAY: Some snow accumulations in parts to begin the day on Thursday, as a band of rain, sleet and snow clears away southwards, and fragments. Brighter conditions with sunny spells will extend to all areas during the afternoon, with showers becoming largely confined to north and northwest coasts. Another raw day with highest temperatures of just 1 to 5 degrees Celsius, in moderate northwesterly breezes.

Largely dry and clear on Thursday night apart from the risk of a few wintry showers, especially in parts of east Ulster and Leinster. Lows of -2 to +2 degrees with widespread frost and icy patches in moderate northwest winds.

Friday: Many areas dry on Friday with sunny spells. However, wintry showers may affect mainly eastern and western coasts. Daytime highs of 2 to 4 degrees in moderate northerly breezes.

Turning bitterly cold once again under long clear spells with lows of -1 to -5 degrees with a widespread severe frost and icy patches, forming in light and variable breezes. Any remaining wintry showers near southeastern coasts will die out overnight. Cloud will thicken over Ulster by morning.

Saturday: Frost and ice will slowly clear on Saturday morning. It will be a cloudier day over the northern half of the country, with showers in the west and north. The best of the brighter weather will be further south and east. In mainly light westerly breezes, highest temperatures of 2 to 5 degrees generally, but a few degrees milder under the thicker cloud and patchy rain in the northwest.

On Saturday night howers will persist along western and northern Atlantic coasts, remaining mostly dry elsewhere with a mix of cloud and clear spells. Lowest temperatures of -2 to + 3 degrees in light westerly or variable breezes allowing for some mist and fog patches to form.

Sunday: Frost, mist and fog patches will clear through the morning leaving a mix of cloud and bright spells. The risk of showers will continue along northern and western Atlantic coasts, remaining largely dry elsewhere. Less cold in light to westerly breezes with highest temperatures recovering somewhat at 5 to 8 degrees.

Early next week: Highest risk of showers will be in the north and west with generally drier conditions expected elsewhere. Temperatures look likely to return closer to average, as a mainly light westerly airflow becomes established.

Our 10 day Atlantic Chart shows the precipitation and pressure forecast in 6 hour intervals.https://t.co/kzoX5HlOXL

A nationwide forecast and outlook covering the next week can be found here. https://t.co/9gKN6SVok4 pic.twitter.com/CjvJm6IT8d