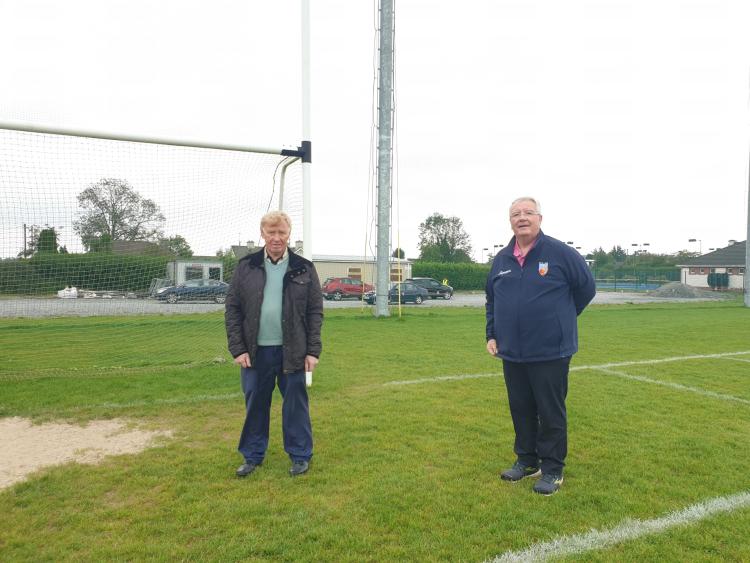 THE people of Tullamore have been asked to back a new membership scheme for the Sports Link community leisure facility off the Arden Road.

Sports Link is a development of playing pitches and walking track put in place by Tullamore Camogie Club, Tullamore Ladies Football and Tullamore GAA, along with the Municipal District of the County Council.

Sports Link chair Tommy McKeigue, and treasurer Tom Martin, this week said membership of the facility is open, with an introductory offer of €30 per person which will permit entry to the grounds from this week until the end of 2021.

Sports Link also confirmed ambitious plans for further improvement of the project, with exercise stations, lighting of the walkway, a new entrance and perimeter fencing all in the pipeline.

“The entrance will be going in in the next 12 months and there will also be the start and completion of our perimeter fencing,” Mr Martin told the Tullamore Tribune.

“Our three stakeholders are the three clubs and our other partners are the municipal authority but this is a community facility. It's a real community effort.”

Almost €300,000 has been spent on the Sports Link project so far and thanks to fundraisers which attracted massive support from the local community and local businesses, all the debts have been cleared.

“In order to run it like the Harriers we have to have membership so there will be insurance for members,” explained Mr Martin.

Maintenance and insurance costs come in at an average of €1,000 each month.

“That's €12,000 every year so to alleviate that cost a membership will apply.”

In the future there will be a fobbing in arrangement in place, ensuring secure entry and exit and guaranteeing that members will enjoy the benefits of the amenity.

The walking track surrounding the pitches is 800 metres long, meaning that two laps is equal to one mile.

“We'd like to thank all the businesses and the community for their support in our fundraising efforts to date. The Broadway show was one event which was very good,” added Mr Martin.

Sports Link is a voluntary limited company with directors representing the clubs and the municipal authority and it has been part-funded by State aid and National Lottery funding.

It is wheelchair accessible, a condition of being eligible for Sports Capital funding from the Government, and it also has two high quality prefabricated rooms with meeting facilities, toilets, electricity and all other services.

“We would like to pay a particular word of thanks to Jim Larkin who has made a major contribution to the project. And also to wish him well, he hasn't been well and we wish him a speedy recovery,” said Mr Martin.

Jim Larkin was a lifelong employee of Flanagan builders and he put his years of experience to very good use as the Sports Link project was developing.

The committee also thanked Seamus Walsh of Walsh Plant Hire for what Mr Martin called the “trojan work” he did on preparing the site and putting the ducting in for the services.

“He did a lot of it free of charge,” said the treasurer.

The facility is also an example of how construction materials can be recycled. With the help of Tullamore council area engineer John Connelly, road surfacing rubble from the town street works has been reused on the roadway leading into the pitches and car park.

Handrails which were formerly along footpaths in the town centre will also be installed there.

Mr McKeigue, a former member of Tullamore Town Council and Offaly County Council, recalled that the land, which is adjacent to Tullamore Tennis Club was originally owned by the local authority.

“The council held onto the land and they always had it designated as a recreational facility. The Tennis Club have upgrade their facilities too so the whole complex is great from a sporting point of view,” said Mr McKeigue.

Along with seeing the Sports Link project take this big step forward, Mr O'Brien is this week celebrating his achievement in managing his home club, St Brigid's, to a surpise win in the Roscommon county senior football final over Pearse's, a team trained by another Offaly man, Pat Flanagan.

“We'd like to congratulate Benny on that great win,” said Mr Martin.

The two pitches on the 10-acre site, which were installed by Offaly sports pitch developer John Foran, are top quality sand-based fields, one full size and another slightly smaller.

Sports Link are examining the feasibility of extending the pitch at the rear of the site.

“We're catering for in excess of 700 children and there is an adult membership of approximately 500 between the three clubs, so a total of 1,200,” said Mr Martin.

He acknowledged the assistance of the community employment scheme, TUS, Tullamore Social Services and Tullamore Credit Union and said that Offaly Sports Partnership had also used the ground this summer for some of their programmes.

The community are welcome to become members of Tullamore Sports Link this Friday evening from 6pm when payment can be made in person at the facility.

Enquiries about membership can be made by contacting Tom Martin on 087 2708072, or any member of Tullamore Sports Link.