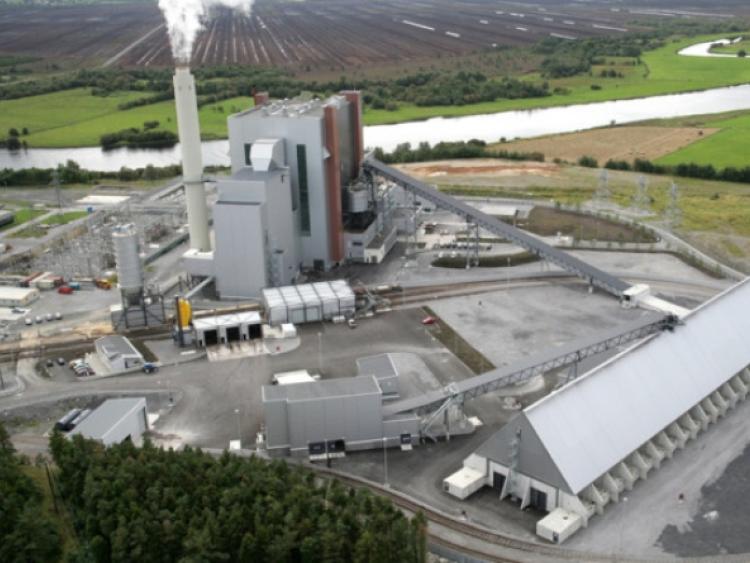 Angry local councillors are urgently seeking a meeting with the ESB to express their alarm and sense of shock at the news reports last week that it's being proposed to demolish the power station in Shannonbridge.

West Offaly Power Station cost €200 million to build and was opened in 2004. There were proposals to change it from a peat-fired to a biomass-fired station but these have been put to one side.

Cllr John Leahy, Chairman of Birr Municipal District, told the September meeting of Birr MD, in Aras an Chontae Tullamore, that everyone was shocked to the core when they read the news in the media that the ESB was planning to completely knock the station.

“The news came completely out of the blue,” he said, “we were given no heads up. We used to have a good relationship with the ESB, now it is simply not responding to our correspondence.”

Cllr John Clendennen reminded the councillors that there had been talk last January of demolishing the station. “At the time I proposed at the time that we shouldn't knock the building but should repurpose. There are a number of positive, other uses for it. We had hoped this issue had gone and so it was very disappointing when we read last week that the ESB is seeking a contractor for its knocking. We have heard nothing from the Just Transition Commissioner Kieran Mulvey in response to this. Surely he would say or do something. Demolishing it doesn't make sense. We now need to prioritise this cause and explore all avenues. Time is short and it might not be long before the wrecking ball is unleashed.” The councillor pointed out that alternative uses include tourism uses, remote working, cultural and educational uses; all of which could benefit Shannonbridge and the surrounding area. He said there is unfortunately a difficult reality facing the county with the cessation of carbon fuel dependency. The County Council, he feels, should lead the way in providing innovative and sustainable alternatives.

Cllr Peter Ormond remarked that all the councillors were very shocked by last week's sudden, unexpected news. He reminded them that the news of the station's closure was first announced last November. “Since then we have had no communication at all from the ESB, nothing in the last ten months. The station is state of the art. It's only 16 years old. It cost a vast amount of money to build. And yet they are going to knock it. It doesn't make sense.” He pointed out the premises could be used for office spaces and for other industries. “Energy production would make sense because Offaly has always been an energy source hub. I am very concerned about this. I am concerned that it seems to be happening so fast. It is a regrettable and retrograde step.”

Cllr Eamon Dooley said the situation is deeply disappointing, depressing, and shocking. He said the Municipal District had to seek a meeting with the ESB as soon as possible.

Cllr John Carroll said the whole thing from the point of view of the powers that be seems disorganised and confused. “It would leave you wondering if one hand knows what the other hand is doing.” He agreed that a meeting with the ESB is an urgent priority.

A Council official said the Planning Department in the County Council has been in contact with the ESB in regard to the decommissioning of the plant but the ESB hasn't replied yet and no meeting has been set up.

Cllr Leahy pointed out that there used to be a good relationship between the ESB and the County Council. “However it's now obvious that the ESB used to meet with us when they had need of us. Now they have no need of us they don't respond to our emails and they won't meet us. That shows you, I think, the type of people that we are dealing with. As a result, Offaly is being left behind. And all this from an organisation which levies many millions in taxes from the taxpayers every year. They are disrespecting us as public representatives.”

Cllr Ormond said the Council has until October 9 to act, which is the deadline date for the submission of tenders by potential contractors. “If we don't act by then the place could be a greenfield site in a very short period of time.”

West Offaly Power Station is due to cease production in December 2020. The ESB had submitted an application to An Bord Pleanála in 2018 seeking planning permission to transition West Offaly Power from peat to biomass over a number of years starting in 2020. This planning application was rejected by An Bord Pleanála in July 2019, pushing the company towards its closure plans. The contractor employed by the ESB will be asked to remove all structures, buildings and plant components with associated waste disposal as per the stipulations outlined in the planning and environmental regulations for each site. The contract will include: Fuel supply system, Ash removal system, Powerhouse structures, Chimneys, Site buildings, Underground structures / services, All power plant components remaining after the asset recovery programme.

The establishment of a dedicated “Energy Hub” and a “Centre for Climate Change” in the Midlands were among the key recommendations made by Kieran Mulvey in May when he published his eagerly awaited Just Transition report. Mr Mulvey said the dismantling of the power stations in Offaly and Longford shouldn't happen until the Energy Hub option is explored.

When contacted by the Tribune after the news broke, a spokesperson for the ESB outlined: “In November 2019, ESB took the difficult decision to close the two midland stations. This decision followed an extensive review of all options and was based on the key planning, climate and commercial issues associated with generation at the sites. Regrettably, ESB concluded that there is no viable business model to operate the plants beyond 2020.”

“ It should be noted prior to any development opportunity taking place and to enable future development, ESB must satisfy our planning requirements to remediate the existing sites.  In remediating the sites a number of commercial contracts are required, including those for specialist services.”

“Due to the complexity of these services and the anticipated value of the contracts, they will be advertised through the Official Journal of the European Union (OJEU), an EU-wide process.  This process has now commenced and will be done in a manner that ensures that ESB complies with EU procurement guidelines. ESB will continue to seek the best commercial value from the plant assets.”

Meanwhile, Barry Cowen, TD called on the Minister for Communications, Climate Action and Environment to clarify commitments to the midlands region in terms of supporting the livelihoods of the community in Shannonbridge.

Deputy Cowen made the comments as the e-ender for the demolition of the two ESB midlands stations in Shannonbridge and Laneborough were made live.

He commented: “I worked hard to secure commitmetns that the Just Transition funding targeted areas most high by job losses, including Offaly. Communities rightly believed the two power stations in the midlands would be repurposed in some form. This looks extremely unlikely now and I am call on the Minister for Communications, Climate Action and Environment to clarify the Government position.”

“Included in the Mulvey report was the issue of exploring alternative uses for Shannonbridge and Lanesborough station. The Programme for Government makes strong commitments to the people of the midlands and the move away from peat in the region.”

“Minister Ryan needs to clearly explain why this process has been expedited, what if any consultation his Department has had with stakeholders in the region, and what plans the Department have for the people of the Midlands who have been seeking and want to provide alternatives which will secure jobs and communities in the region,” concluded Deputy Cowen.