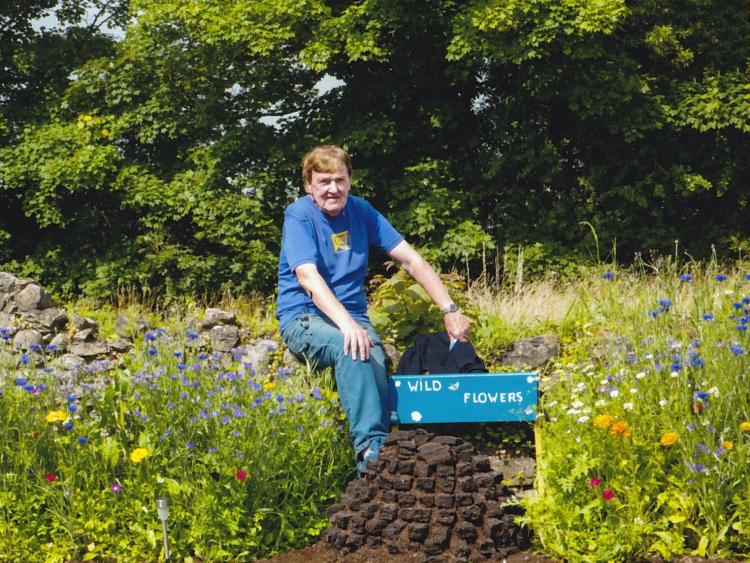 Pictured is Ray Flannery amongst the Memory Lane in Banagher. Photo by Dave Boylan

A tribute to Banagher born singer and musician, Johnny McEvoy, made a welcome return to the town recently.

A number of years ago, a statue dedicated to the singer was erected at the bottom of the town across from the house where Johnny was born. Unfortunately, the tribute had to be removed last year due to irreparable damage after it had rotted, due to the bad weather and became unsalvageable. A decision was then taken to remove it from its location, adjacent to the entrance to the Marina in Banagher.

This summer, however, after completing the happy memory path in Banagher, along the Harbour Road, during lockdown, an idea came into Ray Flannery's head that this might be an “apt and fitting” setting for a small tribute to be erected in honour of Johnny.

The memory path was completed earlier this year by Ray after he decided to clean up an area around his house along the Harbour road during the Covid-19 lockdown. With the idea literally blooming in Banagher, it has brightened up an old stone wall as well as the entire area surrounding the path. And now, Ray has made a new addition to his much loved feature in Banagher with the erection of the tribute to Johnny McEvoy.

Speaking to the Tribune last week, Ray was delighted with the new addition to the happy memory path. “I got an image of him embedded into a stone plaque, which I then inserted into the stone wall adjacent to the memory path,” Ray explained to the Tribune. At the same time, Ray said he didn't want the tribute of Johnny to take from the objective of the memory path, which was to “honour the special memories and enjoyable occasions, people like to remember in their lives, by donating or planting a flower or shrub along the path”.

The tribute to Johnny is located above a mini turf path and turf clamp, which Ray created to symbolise two lines in the chorus of Johnny's song, 'The Town I left behind', which was written about Banagher.

'And, I can see that old bog road,

' With turf piled to the sky'

Johnny has been one of Ireland's top singers for the past fifty to sixty years. He has topped the Irish record charts on four occasions with his most popular and biggest selling songs, 'Mursheen Durkin', Nora, Boston Burglar and his own compositions, 'Long Long Before your Time'. He has also written many other great songs, many of which have become standards, recorded by other artists. This has been the start of Johnny's seventh decade performing, which is truly phenomenal. He's best known for his live performances and tours in Ireland and on the international circuit. His renown is world wide and he has spent many years travelling and performing.