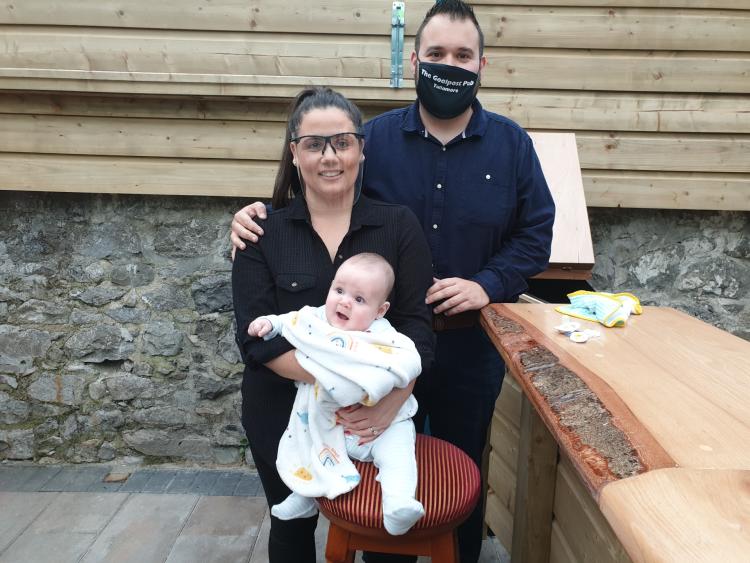 Working around the clock in their Tullamore pub during the Cheltenham racing festival, the couple were also counting down the days to the arrival of their first child.

“We had Cheltenham week here and it was like four St Stephen's Days in a row. We were busy but by the Friday we realised [Covid-19] was really going to change our lives,” says Darren.

“We closed up on the Saturday before Paddy's Day, which was the Tuesday, and the following Tuesday Rosie gave birth to this beautiful little man here.”

Little Paidi was born in the Coombe Hospital into a world of unprecedented uncertainty.

Darren, who is from Tubber, and Rosie, a Tullamore woman from Arden View, live upstairs at their pub, the Goalpost on William Street.

Rosie says: “It was complete lockdown for us when we got him home. It was complete fear, bringing him home to this virus that no-one knew what it was about.”

First-time father Darren had some fleeting moments with mother and child but then had to return home alone to a closed pub and a town in complete lockdown.

“I was allowed in literally as she was giving birth and 20 minutes after he was born I was gone. It was heartbreaking to get into the car and drive an hour and a half back home.

“I cried the whole way home and I didn't see her or the child for five days.”

Initially, the 'Stay at home' public health advice meant excursions outdoors for shopping only were permitted.

“So from a business perspective our minds were occupied elsewhere until about two months and next minute you're looking at your bank statement and your insurance is still being paid, you've your rent and electricity and you're going, how are we going to start paying these bills?”

They took over the well known O'Connor's premises in 2017 and their third year trading was the busiest ever.

Then like all pubs, time was called and the waiting game began.

Ultimately, as phases passed and 'wet' bars like theirs failed to get the green light to reopen, they were left with no option but to offer food.

“Basically, we had to put our thinking caps on. We completely renovated the place. It needed to be done so it was the best time to do it and it also kept our minds occupied because before this we were working seven days a week.”

The toilets were refurbished and a beer garden was developed, the latter a necessity to add more space to allow for social distancing.

All that investment took place with little help from the Government.

“We were getting no break from anyone. The Government announced they were giving us a grant for what our rates were and three days after that was announced we got a letter through the door from the [council] to tell us the rates were due. It came in one hand and it came straight back the other. That was a big kick.”

They linked up with Pallas Foods for pizzas, the Canton Regent and Eddie Rocket's takeaways, and meals prepared by Doyle's Gala down the street.

“We had a case where two customers have walked out because they refused to buy food and were getting away with drinking somewhere else without buying food but at the end of the day you have to buy food and that is it and you have to adhere to the rules that are set.”

Meanwhile, the Tullamore pub widely renowned for having the best stout in town had to make a similar decision.

Mick Waters has had the Harbour Bar for 15 years but for the last 24 weeks not one pint of Guinness was poured.

On Monday afternoon he reopened after installing a pizza oven and a freezer.

Like Digan's nearby, the pizzas are being supplied by local company Buggy Foods.

“My biggest problem would be turning away genuine decent customers that were good to me throughout the year.
“What do we do? It was either the food or stay closed.”

The shutdown gave him a chance to carry out some renovations but he has been forced to cut his staff numbers.
“But we have our health. None of the family got Covid, we're back up and running but we're going to be on considerably reduced capacity.”

Elsewhere in Tullamore, Hugh Lynch's, rebranded as The Burger Bar, and The Lantern, with burgers, fish and chips from Mario's, are also serving food while this week Joe Lee's was reopening with a food court after teaming up with Jenny's Kitchen, Subway, Macari's, Leavy's Centra, and the Blue Apron and New Village restaurants.