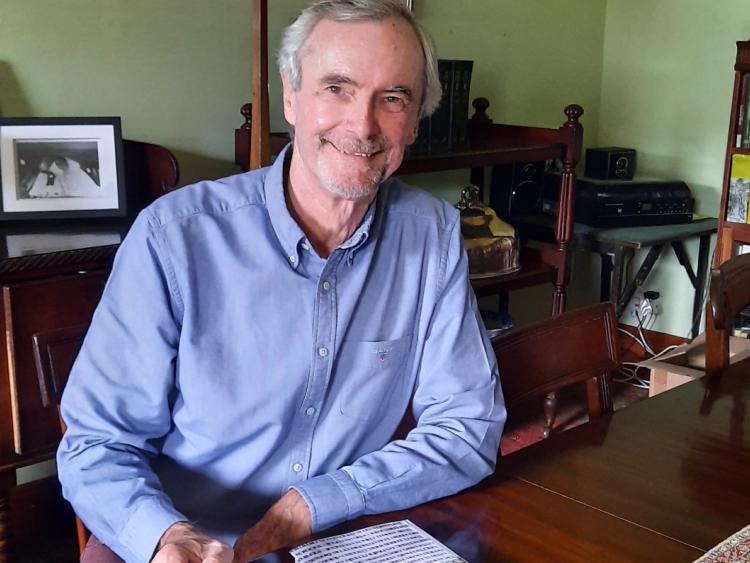 A new book, titled 'Adomnán’s Lex Innocentium and the Laws of War' and published by a Birr author details what many would regard as the most notable single event in the history of Birr.

The work of Jim Houlihan, the book tells the story of Lex Innocentium, also called the Law of the Innocents or Cáin Adomnáin. In one early source, the law is referred to as “The Great Law of Birr” and sought to protect civilians in time of war, making it as relevant today as it was in 697 AD, when it was enacted.

The book is dedicated: “To the people of Birr, from this generation to future generations, about something remarkable that happened in their native place many many generations ago. To the people of Ireland, so they may learn of one of the great treasures of their heritage. To the custodians of the Geneva Conventions, so they might know of and be inspired by one who went before them. “

Former state solicitor and retired member of local law firm, D.A. Houlihan & Son, Jim outlined to the Tribune where the premise for his new book came from. With a great interest in history, Jim became aware in the 1990s of this law and its enactment in Birr in 697 AD. “I am interested in history but I hadn't realised it had happened in Birr. I also realised in 1997 it would be the 1300th anniversary of its enactment and I said we should do something to mark the occasion in some way. We got a committee together and organised a superb weekend of events in Birr to celebrate that.”

From there, Jim maintained a strong interest in this law and completed an MA and PhD on this subject, which he later adapted into his new book.

The law of war refers to the component of international law that regulates the conditions of war (jus ad bellum) and the conduct of warring parties (jus in bello). The United Nations police one aspect while the International Red Cross monitors 'jus in bello'.

So, Jim decided to treat this law from the point of view of a law of war. “The reason being, the provision of it, was intended to protect women, children, clerics and other non arms bearing people in times of conflict. In later times, it began to deal solely with the protection of women. I then looked at it in the context of its place within the laws of war. Was it the first law, the last one, the middle one? Where did it come in?”

Jim decided to also look at where this law comes into the history of the laws of war. “I expected to find laws similar in Greek, Roman and even early Christian times but the fact is that I couldn't find anything,” he noted.

According to the author, he could only find one historian, who knew about this law and he wasn't aware that its terms could be checked and were available to examine. “Outside of Ireland, nobody knows anything about this law. And in Ireland, it is only treated by historians in passing but there has been hardly anything in-depth about it. Anyway, having gone into considerable detail, I came to the final conclusion: it was the first and only law in the Western world for the protection of civilians, innocents in the first Millennium of the Christian era.”

Jim also had an article on this law published in the International Review of the Red Cross where his main case was that Adomnán, the abbot of Iona, who came to Birr to enact this law, should be “rightly and properly regarded as the father of international humanitarian law”. “Yes, it is a sweeping statement but that is what the book is all about,” Jim continued.

The writer explained he could see from Adomnán’s other writings that he had a “deep concern” for innocents and when he came to Birr in 697 AD, it would have the “greatest of occasions” in the history of Birr. There is a list of 91 names, who guaranteed the law, at the time and this, according to Jim, is a “pretty unique document” to have so much detail of a meeting in Ireland so long ago. “It was this incredible occasion where the law was enacted,” he enthused.

Unfortunately, there are no details on whether the law had the effect that was intended as in those days, the Irish legal system didn't record judgements like it does today. “We don't know but there are mentions of it right down through the centuries here and there,” Jim pointed out.

There is also a copy of the law, made in the 1600s by Mícheál Ó Cléirigh (c. 1590 – 1643), the chief author of the Annals of the Four Masters, which is available in Brussels and Jim has been to visit this vital document.

Looking to the future, Jim said he would like to see “Birr recognised as an early Geneva” and to see a monument somewhere in the town to mark “this significance of this” Meanwhile, the author thanked Offaly Heritage for their assistance towards the cost of producing this fascinating book and it's available to purchase at offalyhistory.com, or direct from the publishers www.fourcourtspress.ie/books