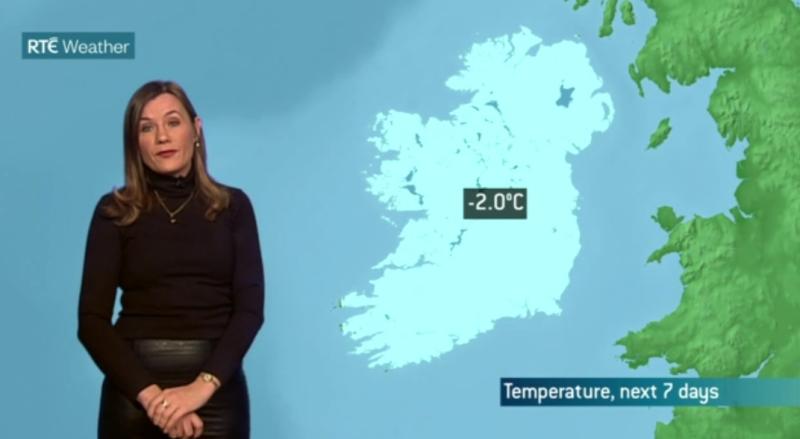 Cold windy weather features in Met Éireann's weather forecast for the week ahead with snow possible at the start of the week which features a Status Yellow rain warning that has raised the risk of flooding and hazardous driving conditions on Monday morning.

Meteorologist Siobhan Ryan outlined the gave a taste of what to expect in the days ahead in the weekly farming forecast on RTÉ on Sunday when she also gave an update on the weather warning for late Sunday and early Monday.

The forecaster said rainfall has been three and half times above normal in the past week on already saturated or waterlogged. She said temperatures were around average but winds were high and above average.

As for the week ahead Ms Ryan said a Status Yellow rain warning is in place and the country would see up to 25 mms falling on Sunday night into Monday morning. She said it would also be a cold night, coldest in the early parts of the night and strong winds will also be feature.

"20 to 25 mms of rainfall is highly likely and it will probably turn to sleet and snow  for a time in parts," she said.

The forecaster said the rain when preceded by sleet and snow. There could be some accumulations of snow in parts over night leading to hazardous driving conditions.  Rain will replace the wintry showers as the night proceeds raising the risk of flooding.

She said the rain would clear on Monday but it will leave in its wake a cold northwesterly blustery airflow which could bring some showers though it is expected to be dry on Monday in most places. Ms Ryan said temperatures would be no more than 6 and 9 degrees during Monday. 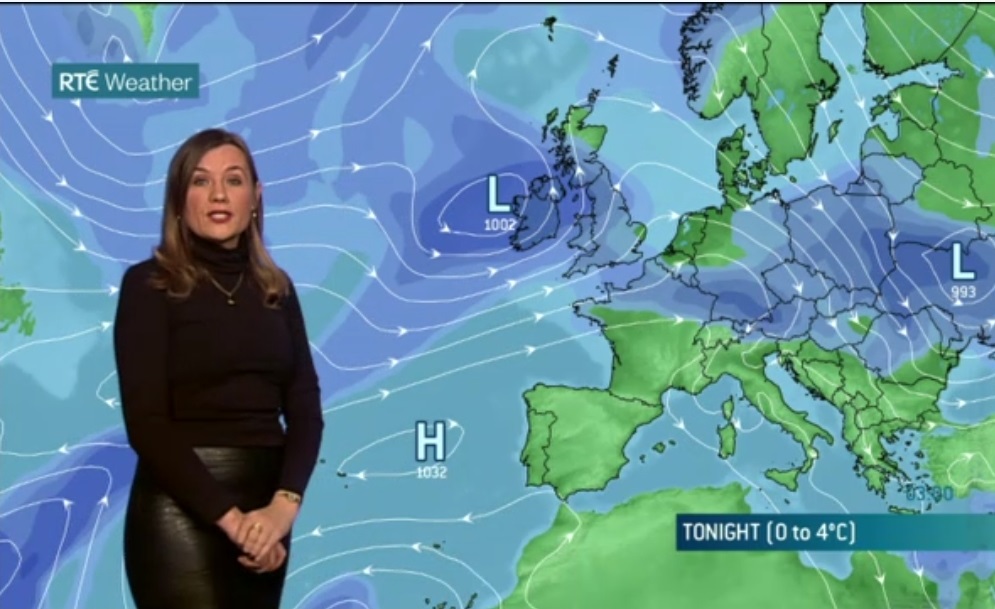 As in recent weeks, the theme set on Monday is set to be followed by more of the same for the rest of the week.

"Into Tuesday and Wednesday much colder air and a significant wind chill factor with a scattering of wintry shares and some falls of snow possible. All the while then it is going to stay cold through Thursday and Friday staying very unsettled," she said.

Overall for the week ahead the forecaster said the temperatures would be below average though it is not expected to be as wet as the week gone. MORE DETAILS BELOW TWEETS.

Rain extending across Munster, and spreading northwards to Connacht and Leinster this evening. Cold, with maximum temperatures of 5 to 7°C generally, but 8 or 9°C near the south coast. pic.twitter.com/W7uDnMu1Kr

SUNDAY 23RD FEBRUARY
Rain will extend to all areas, with some heavy falls, leading to local flooding. The rain will turn to sleet and snow across parts of Connacht, north Leinster and Ulster, with some snow accumulations for a time over high ground leading to hazardous driving conditions. The sleet and snow will turn back to rain later tonight and towards morning as temperatures rise. Minimum values 0 to 4 Celsius, coldest in the northern half of the country early tonight. Moderate to fresh southeasterly winds will veer southwesterly and increase fresh to strong and gusty with gale force winds in southern and eastern coastal areas.

MONDAY 24TH FEBRUARY
Tomorrow morning, outbreaks of rain and any lingering sleet or snow in Ulster will clear. It will brighten up in the afternoon with sunny spells developing along with scattered showers in the west and north. Maximum afternoon temperatures of just 5 to 8 Celsius. A blustery day, with fresh to strong and gusty southwest to west winds, veering west to northwest with gales at times along coasts.

NATIONAL OUTLOOK
Summary: Very cold and unsettled for the rest of the week, with occasional showers or longer spells of rain and some wintry precipitation of sleet and snow at times, especially in Ulster and Connacht. Some dry, bright intervals also. Frost at night.

Monday night: Very cold, with clear spells and scattered showers, the showers most frequent across the western half of the country, with some hail, sleet and snow showers, especially in Ulster and Connacht. Minimum temperatures 0 to 2 Celsius, with a risk of frost, especially in places sheltered from a moderate to fresh westerly wind.

Tuesday: Very cold, with a mix of sunny spells and scattered showers, some of them falling as hail, sleet and snow, especially in the north and west. There is also a risk of thunder, particularly in Atlantic coastal counties. Maximum temperatures just 4 to 7 or 8 Celsius, in mostly moderate to fresh westerly winds, strong along west and southwest coasts. Tuesday night will be windy, with further wintry showers, most of them in the western half of the country. Min. minus 1 to plus 2 Celsius, in moderate to fresh west to northwest winds. Risk of frost and icy patches.

Wednesday: Still very cold, with below normal temperatures. Maximum values only 4 to 8 Celsius, A bright day, with sunny spells, but scattered showers also, some of sleet, with a continuing risk of snow showers, mainly over high ground. Winds mostly moderate to fresh, west to northwest, decreasing light by Wednesday night. Very cold overnight, with sharp or severe frost. Dry in many areas, but some wintry showers will occur in the west and northwest and more persistent rain will develop in southern coastal areas. Min. minus 2 to plus 2 Celsius.

Further outlook: Current indications suggest that it will remain very cold and unsettled for the end of the week and the weekend, with a risk of further wintry precipitation.